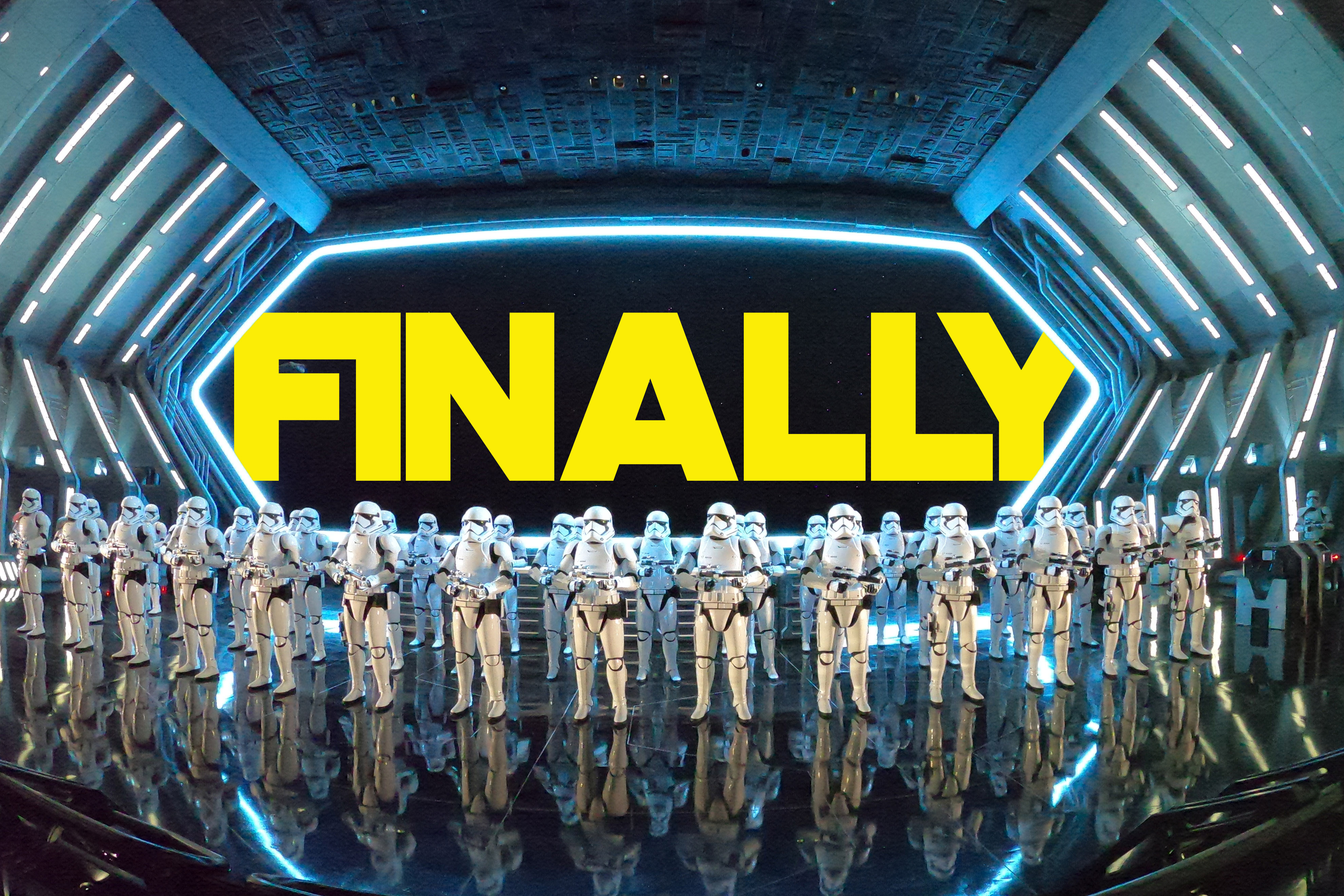 Disney has done it… FINALLY!

For years I have visited overseas Disney parks and for years I have felt jealously towards the incredibly themed immersive experiences they and only they seem to receive. The Tokyo parks in particular are lavished with such care and attention to detail that it is hard to understand how the same company responsible for Disney’s California Adventure also created Tokyo Disney Sea. Yes I of course understand that Disney neither owns nor pays for the Japanese parks. In fact that crystalizes the reasons (money and willingness to spend it) why they have thrived both financially and creatively during dark periods for our domestic parks (I’m looking at you late nineties through early 2000’s). But understanding why the Asian parks get all the good stuff does not make it any easier to digest.

FINALLY, after what seems like a lifetime, Disney has brought the no holds barred approach to the domestic parks. Rise of the Resistance sets new standards, showcases new technologies and (in a watershed moment) does not cut corners, anywhere. It is in fact precisely the type of attraction I would expect to find in Tokyo or Shanghai and lament why they get all the good stuff. Now we get the good stuff! We get the BEST stuff!

Disney has trickled some higher end projects our way in recent years, Flight of Passage continues to be outstanding and Carsland stands as one of the best themed environments ever created. Yet with every Flight of Passage has come a Navi River, you know, something that was nice, was OK, had moments but also felt restricted, throttled back or just lacking scope in general. Even within specific attractions it would be easy to spot the moments where an effect was removed or a scene was reduced in scale in order to meet budgets. With Rise of the Resistance we see virtually none of that, in fact we see the opposite. We see details poured into cracks and crevices unlikely to be seen by the vast majority of guests. We see innovations in ride systems that I did not even know were possible. We see lines so blurred between queue, pre-show and ride that for all intents and purposes they become one jumbo all encompassing event. No pun intended but “Rise” raises the bar and elevates all of Galaxy’s Edge to new heights.

Imagine if Pandora had opened with only the river ride, a restaurant and a shop. Sure, it looks nice enough but it is an average ride surrounded by some nice scenery. Millennium Falcon: Smugglers Run is better than an average ride, it is actually very well done and the details are amazing, but it is the supporting character not the star. The shops, restaurants and cantina are all great, but Galaxy’s Edge was missing something, we just did not realize how big that missing something was. As it turns out the missing piece was a Death Star sized mega attraction that has FINALLY given the U.S. parks an attraction that not only is on par with the best of the world it may best them all.

Journey to the Center of the Earth at Tokyo Disney Sea has been my high water mark for nearly 20 years now. It uses an amazing ride system to travel through incredible show scenes and deliver a fully immersive experience that I love. Mystic Manor in Hong Kong Disneyland utilizes a similar trackless ride system as the one used by Rise, again offering a fully immersive show that even introduces new and engaging characters and music. Pirates of the Caribbean at Shanghai Disneyland is an incredible and huge attraction. It updates the beloved classic while taking it in a totally new direction. It features massive show scenes, ride vehicles that are not what they appear to be, on-board music and technological advances that make it easy to suspend disbelief. Flight of Passage takes the simulator to new peaks, it feels real, it’s an impressive all around attraction.

Yet as good as all of these are they all have moments or weaknesses that allow you to slip out of the moment. Journey is a little too short and has an instance or two where we can perceive painted backdrops. Mystic Manor is great fun but never transcends being a fantastic theme park ride, you are always aware that you are in a park on a ride. Pirates employs too many screens and on occasion you can see those seams and while on Flight of Passage if you turn to the side you will see the steep banks of other riders ogling the massive screen.

Disney has examined what makes up a standard ride: the line, the pre-show, the load area, the main ride and the unload and they have subverted expectations at each step of the way. The line is no longer a line, there are multiple pre-shows that are all part of the overall experience, the load area is actually a pre-show and part of the story in and of itself, the ride is unlike anything ever done before and even the unload is unique. It all comes together to create a story, an immersive and massive experience that transcends being a ride and morphs into something new, something we have not seen before. Disney has redefined what a theme park ride is.

Here Cast Members become active participants in telling the over-arching story. Waiting areas become massive set pieces and the ride is truly 360 degrees encompassing, look left, right, up, down, directly behind you, directly above you, at the actual ride vehicle,  look wherever you like, there are no seams. You will not find the fringed edges typical of even the best of the best attractions. You do not need to suspend disbelief because there is simply nothing not to believe in, it appears real.

I am a huge fan of concept art, especially the art Imagineers create in “Blue Sky” phases when they dream up the most ambitious ideas. Some of those concepts could never be built due to budgets or physics or a myriad of other real world reasons, but it is fun to dream. Rise of the Resistance has the feeling of the most outlandish concept art coming to life.

FINALLY Disney has pulled out the stoppers. FINALLY Disney has opened its wallet. FINALLY the Imagineers have been able to work in a nearly unfettered fashion (one can only imagine what they had thought up if this is a reduced “realistic” version). Disney has FINALLY allowed us to see the future of theme parks.

Rise of the Resistance may be your new favorite ride, or it may not be. You may have so much history with Mansion or Pirates that nothing will ever top them for you. You may not be a Star Wars fan and it all may seem like confusing nonsense to you. But love it or hate it the scope and scale and ambition cannot be denied. Disney has FINALLY unwrapped its new toy just in time for Christmas and I can FINALLY stop feeling jealous about the overseas parks.