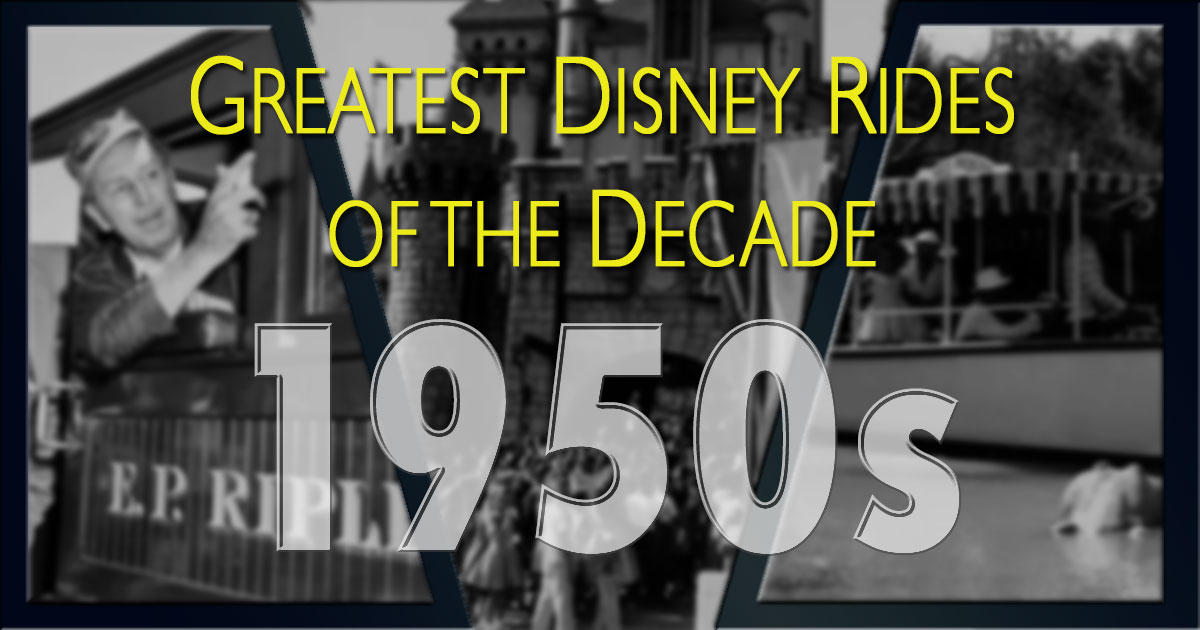 For more than a thousand generations, the theme park did not exist. And then suddenly in the 1950s, Disneyland was born unto us.

Now twelve theme parks adorn the Disney crown. Each one boasts its own important milestones in innovation, creativity, and thrills. I mean, except for that Studios park in Paris.

What is the measure of the greatest Disney rides and attractions? Is it timeless storytelling? The harness of technology? The insufferable preshows?

It is all of these and more. The greatest Disney rides propel the artform forward.

To celebrate the dawn of a new decade, we will spend the next week looking back. One decade per day. Our goal is to rank the 5 greatest Disney rides and attractions of that era. And to argue about it.

When it’s all finished, we’ll look forward at what is to come.

And just like that — the decade is already half over.

Many rides were borrowed from other amusement parks of the time. Imagineers put them through the Disney machine and they came out brand new on the other side. Like, they would take a common Teacups ride and paint it different. And it would blow your socks off.

With just one park, a handful of attractions, and only five years to work with, finding 5 great rides seems like a challenge.

An old-fashioned paddlewheel trip around a muddy ditch may seem like a tough sell. Yet the Mark Twain perfectly exemplifies the difference between Disneyland and its competitors in the 1950s.

By emphasizing quality and theme over physical thrills, the Mark Twain established Disneyland as a different kind of park all together. In a culture obsessed with the wild west, here finally was a chance to step into the world of yesteryear.

Walt Disney considered Mark Twain a “weenie.” And that’s a compliment. It was the stunning visual that would draw visitors like ravenous wolves into Frontierland. The first functioning stern-wheeler built in half a century.

The idea of large-scale historical recreations of floating deathtraps would catch on. The Columbia soon followed. And the riverboat itself would spread to parks in Florida, Tokyo, and Paris.

Of all the opening day attractions in Disneyland, the Jungle River Cruise showed the most storytelling ambition.

The Fantasyland dark rides of the 1950s were charming (sort of). What child doesn’t love a maniacal glowing Toad shrieking out at them from the darkness? But their scope was limited. Just crude animation and plywood flats — successors to the standard amusement park fun house.

Jungle Cruise upped the ante by loading passengers onto colorful launches and sending them deep into the heart of the rainforest, where every turn hinted at mystery and malaria.

The corny comedy aspect would not come until later. But the original Jungle Cruise laid the foundation for today’s immersive storytelling experiences.

The Disneyland Monorail was part of a larger plan to reinvigorate Tomorrowland, which had been little more than a rocket, an Aluminum Hall of Fame (not joking), and a bunch of balloons to cover up the rest.

While the 1950s monorail proved a unique excursion over Disneyland (complete with an ungraceful honk), its real influence would not be felt for another generation.

In 1971, the monorail became the backbone of Walt Disney World’s transportation infrastructure. By linking resort hotels and theme parks across an entire Vacation Kingdom of swampland, the monorail came into its own as a symbol of the future.

The Matterhorn holds the distinction as the first tubular steel roller coaster in the industry. It also was the first theme park ride to be scaled by grown men in lederhosen. But those are the least of its claims.

Here we are, only four short years from the opening of Disneyland, and the Matterhorn is already redefining what a thrill ride could be. It is the ultimate weenie. A towering superstructure that is visible not just within the park, but within the entire city of Anaheim. It’s probably more famous than the actual mountain in Switzerland.

In contrast to the Jungle Cruise’s leisurely float through the joys of xenophobia, the Matterhorn ratcheted up the tension, sending you you careening through icy passages to avoid the Abominable Snowman.

Though it remains the only one of its kind in the world, it set the stage for a dozen Disney mountains to come.

Disneyland went through years of design concepts before it was finally built.

But it has always had a Railroad.

Walt Disney’s love of steam trains can be traced to his earliest years as a news butcher on the Missouri Pacific railroad. Later, as a bankrupt Kansas City animator, he bought a first-class ticket West to California. I guess it worked out.

According to lore, Mickey Mouse himself was conceived on a train ride.

Walt even had a person small-scale railroad installed at his home in Holmby Hills and delighted in taking guests around on the Lilly Belle.

When it came time to bring his park idea to fruition in the 1950s, the railroad was the central component. Established on an elevated berm to block out the outside world, the Santa Fe and Disneyland Railroad defined the park’s border. The Main Street U.S.A. station is the literal gateway through which guests enter Disneyland.

Show scenes (and unintentional horrors) have been added over the the years, but the Disneyland Railroad remains a quintessential Disney theme park ride.

As Walt himself once said about Disneyland, we’re just getting started.

If the 1950s dipped a toe in the water, the next decade would dive right into the deep end, producing some of the most incredible theme park attractions ever designed.

Join us tomorrow as we examine the next decade of Disneyland’s history and 5 more of Disney’s greatest rides.