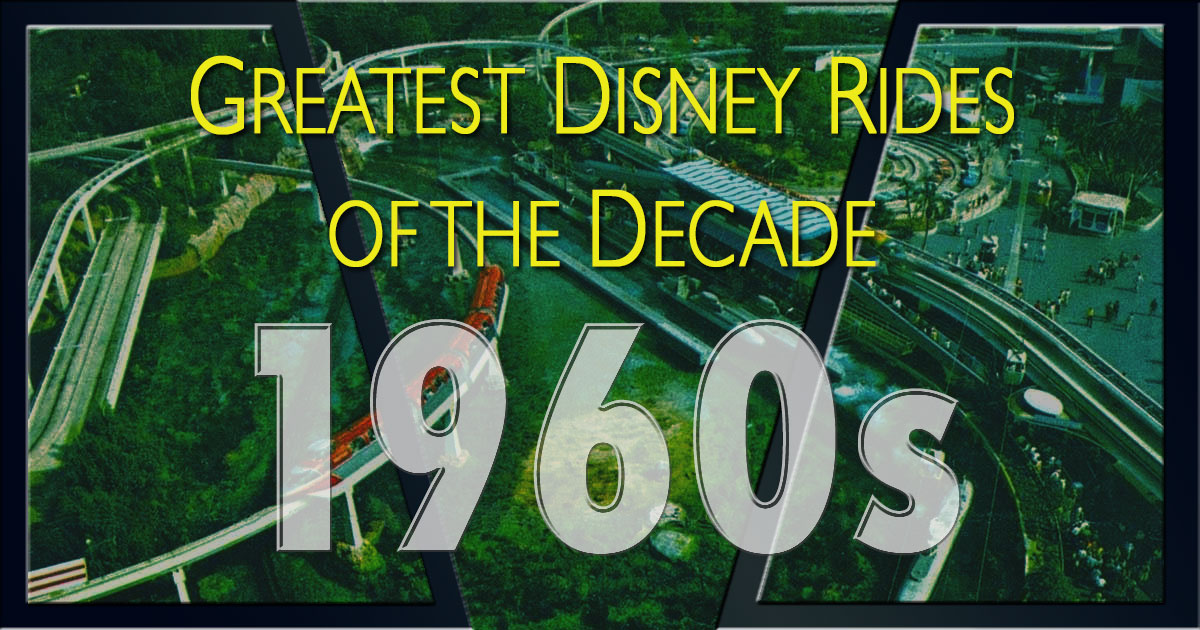 As the booming optimism of post-war America gave way to the free love of the 1960s, five more important rides stepped to the forefront.

Welcome to our journey through the greatest Disney attractions of each decade. Click below to jump to a different decade:

We started in Disneyland, where the new art of the theme park was born. Now that art form is ready to skip curfew and get a driver’s license.

The decade marked a turning point for the Walt Disney company.

His loss (we think) left a gaping crater that his successors would struggle to fill. But at the same time, it also saw the rise of Disneyland as a major force within the company.

The park provided steady and significant cash flow to the bottom line. While the movie studio cranked out things like The Monkey’s Uncle and That Darn Cat, the Disney company decided to double down on the theme park business.

The grandest plan of them all would not be realized until after the 1960s. But these rides laid the groundwork for a seismic shift in focus.

Without the innovations of the Enchanted Tiki Room, most of the remaining rides on this list and into the future don’t exist.

This is the first attraction ever to hitch its star to our Audio-Animatronics robot overlords. It latched on to the Tiki craze of the 1960s and the industry hasn’t been the same since.

It’s one of the first examples of long-form theatrical narrative in a theme park. Carefully nuanced characters like a parrot who talks with a Mexican accent and another one who talks with a German accent teamed up with a French parrot and an Irish parrot to create a memorable presentation that still runs today.

Oh, and it had the first major use of a Sherman Brothers song in a theme park. That alone puts it in the hall of fame.

The ride stands alone as a singular example of pure artistic vision. Its simple message cuts deep into the philosophical core of what a Disney park should be.

Some people also wish it were a shooting gallery. Proving once again that people are just the worst.

Slapped together at the last minute as an entry into the 1964 New York World’s Fair, It’s a Small World was a happy accident. The ride had no choice but to follow Mary Blair’s lead. Her fanciful minimalist stylings stand alone in an industry that is often obsessed with how to create an exploding tornado in the middle of a spinning warehouse.

The Sherman Brothers may also deserve some credit. They created what is unquestionably the most famous theme park song of all time.

Last but not least is its revolutionary flume-boat conveyance system. The 1960s didn’t just expand the mind. They expanded ride capacity too.

Another attraction originally developed for the New York World’s Fair in the 1960s, Carousel of Progress went on to become the longest running stage show in history.

And it runs even longer when idiots try to exit midway through the Fabulous Forties.

In its second decade, Carousel of Progress became the first attraction to teleport itself from one park to another. It has lived in Disney World’s Magic Kingdom ever since.

By its third decade, it had spawned its own spiritual sequel in the form of Epcot’s Horizons.

Its corny optimism and multiple catchy theme songs have endured for more than fifty years, in spite of it being horrifically haunted.

The Mansion’s shell was famously vacant for years as Imagineering struggled to find the right tone.

In the end, they knocked it out of the park. Literally.

Starting with a cleverly disguised stretching room elevator, the Haunted Mansion transports you outside the park’s berm into Somewhere Beyond.

The Haunted Mansion layers trick after ingenious trick to confound, confuse, and frighten passengers. Its basic premise — stitched together with a mutating, haunting melody — perfectly captures the Gothic horror of its ancestral spook house roots, while never once losing its authentic Disney appeal.

The Haunted Mansion (or its Mystic successors) has appeared in some form in every Disney property on the planet except Shanghai. It is generally acknowledged to be one of the all-time greatest Disney rides.

1. Pirates of the Caribbean
Disneyland Park, 1967

If there’s one ride that could battle the Haunted Mansion as the greatest Disney ride of all time, it’s the elaborate, immersive spectacle of Pirates of the Caribbean.

Building on the advances in Audio-Animatronics pioneered by the earlier rides on this list, Pirates of the Caribbean unleashed an all-out assault on the senses.

Sometimes by land. Often by water.

Guests had never seen anything like this breathtaking, ride-through movie-like adventure. Clocking in at a rapturous 15 minutes and featuring another of those timeless Disney theme songs, Pirates of the Caribbean has held the nation spellbound for half a century.

Like Haunted Mansion, it has spread to almost every other Disneyland clone on the planet. Even within the same park, the brand has annexed other attractions, such as Tom Sawyer’s Island at Disneyland or an entire land at Shanghai Disneyland.

It also spawned a series of blockbuster movies, which then recycled back into the ride, giving it new life for younger generations and infuriating several old farts.

In short, Pirates of the Caribbean is the undeniable achievement of the 1960s.

Something big is looming on the horizon. Something 43-square-miles big.

Our series continues tomorrow when we take a look at what the next decade will bring: Disney’s first attempt at duplicating the success of Disneyland.