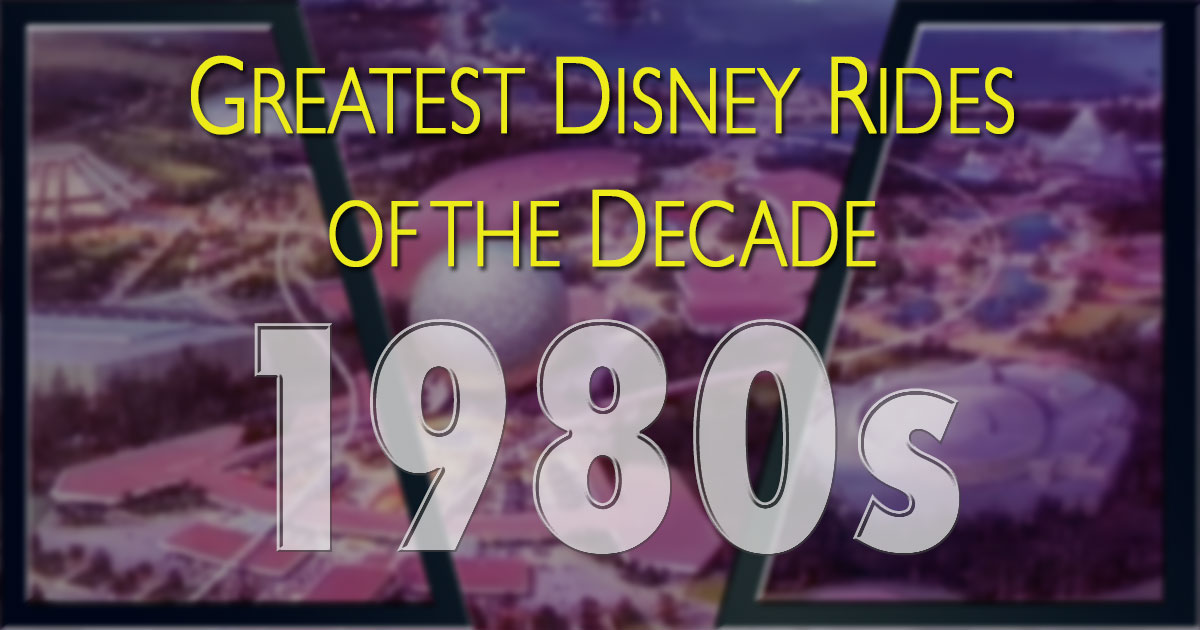 In a survey by top historians, the 1980s was named the world’s greatest decade of all time.

Everything from Saturday morning cartoon viewership to Ewok market penetration ran through the 1980s at an astounding speed.

But we’re here to talk about the 5 greatest Disney rides of the decade. And they are totally rad to the max.

Just catching up on our series? Click below to jump to the decade of your choice:

The 1980s marked a decade of leadership turmoil.

Michael Eisner replaced Walt’s son-in-law, Ron Miller, as the new CEO of the company. And Ronald Reagan replaced Walt himself as the most famous star of the Grand Opening of Disneyland TV show.

In 1983, Disney Parks went international with the opening of Tokyo Disneyland. It was an immediate smash hit. Tokyo Disneyland established itself forever more as a proving ground for what was possible when management actually, you know, spent money.

But the expansion of Walt Disney World proved even more significant in the 1980s.

EPCOT Center was a bold departure from the traditional Disneyland-style parks that had come before. EPCOT took a more intellectual approach through the magic of singing milk cartons and shiny rainbow mouse suits.

At the end of the decade, Walt Disney World expanded again, with the opening of the Disney MGM Studios. Not only had the number of Disney parks more than doubled in the 1980s, but so had the number of attractions starring Martin Short.

At the tail end of the 1980s, this massive animatronic adventure debuted at the fledgling Disney MGM Studios park.

Originally conceived as a movie pavilion for EPCOT, it might be said that the Great Movie Ride was so great, they built an entire theme park around it. This vast 20-minute excursion into the greatest movies of all time brought together every trick in the Imagineering arsenal — fluid and recognizable characters, high-capacity “traveling theater” cars, and the skillful use of mummy puns.

There was even a secret alternate path that branched your journey into either a cowboy shoot out or a gangster hijacking.

It’s hard to believe that only a few short years ago, it closed its doors forever. But since it hadn’t seen a new Great Movie since Raiders of the Lost Ark in 1981, maybe an update was finally needed.

Unwilling to risk several million dollars on rides based on Disney original films like Condorman, Michael Eisner went a different direction with IP in the theme parks.

Star Tours debuted first and Disneyland, but was quickly cloned to the Disney MGM Studios, where a giant AT-AT Walker could more easily spend all afternoon sneezing on guests.

By marrying cutting-edge simulator technology with questionable canonical storytelling, Star Tours transported guests inside a Star Wars movie. If you complain about the overuse of projection screens and simulators today, you have Star Tours to thank.

Star Tours also happened to be the first domino to fall in a plot to acquire Lucasfilm.

And that is how Disney obtained total ownership rights to the souls of all children of the 80s.

As a spiritual cousin to the Great Movie Ride, Horizons was a mission statement for its park.

As a natural sequel to the Carousel of Progress, it took a look at the next chapter in family life.

As a prepubescent boy’s romantic fantasy, it had redheads.

Unlike most of the Future World pavilions, Horizons did not focus on only one topic. Instead, it embodied them all. It gazed into the future of ecosystems like the Land. It pondered energy and communication. It gave us bold new visions of transportation. And it did all of this with an unsurpassed imagination.

Horizons was not the first to use themed scents within an attraction. But its orange grove is the most fondly remembered use of this effect.

And its revolutionary choose-your-own-ending interactive element foretold the future of theme parks years in advance.

Its traumatic destruction and subsequent replacement with Mission: Space left a gaping wound in the hearts of Disney fans everywhere.

Many of the Future World powerhouses have fallen over the years, unable to sustain audience interest. But Spaceship Earth remains — a steady, slow-moving journey through time (which some of us have taken a little too literally).

Its storytelling scope may be the most ambitious of any ride ever constructed: Nothing less than the entirety of recorded human history.

Working within the tight constraints of the geosphere, it packs detailed set pieces one on top of one another until you reach the literal and metaphorical pinnacle of your journey, until…

Behold! The stars and our planet therein.

And oh, that show building. The silver ball may be the most elegant, eye-catching structure ever to grace a Disney theme park.

At least when they aren’t tacking garbage onto it.

While EPCOT Center rose to prominence in the 1980s, it was Disneyland that reasserted itself as the greatest theme park on the planet.

Splash Mountain was the fourth peak in the Disney mountain range. It was conceived by Tony Baxter as a way to solve 5 problems in one fell swoop:

Splash Mountain upended all expectations of what an amusement park log flume ride could be. It sent passengers on a magical journey through the bayou, absorbed in song and spectacle, before hurling them down a 40 foot drop into a sunken briar patch.

It was immediately cloned in Florida and eventually Tokyo. It still reigns supreme as one of the top Disney thrill rides of all time.

The new millennium is fast approaching, but first we need to take a spin through Michael Eisner’s “Disney Decade.”

Check back tomorrow for the next 5 greatest rides of the decade.