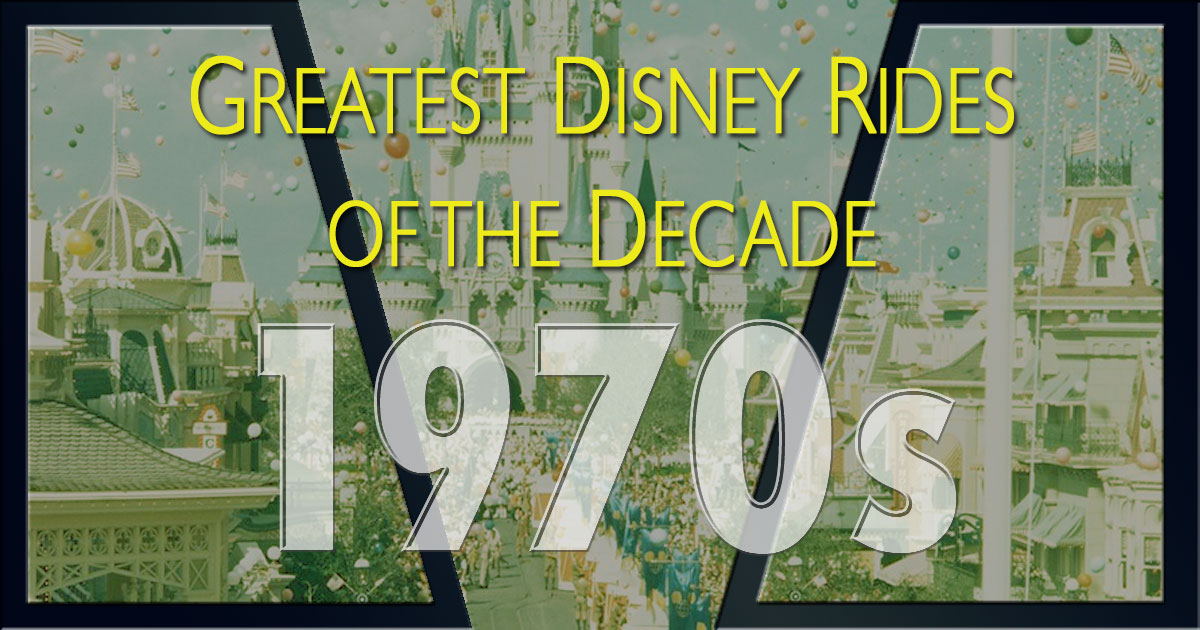 With the arrival of the 1970s, our voyage through the greatest Disney rides of the decade takes an unexpected turn. Into an alligator-infested swamp.

Click below to jump to the decade of your choice:

Up to this point, we only had Disneyland Park. But in 1971, a whole new Disney World opened up.

The animation department was crumbling under its own weight, trying to make something — anything — out of the unnerving voice of Eva Gabor.

But the arrival of Walt Disney World and its flagship theme park, the Magic Kingdom, brought theme parks to the forefront of the Disney empire.

Walt Disney World proved itself a vacation mecca the likes of which may never be seen again. At least in any city not named Dubai.

So much came with it — infrastructure, resort hotels, dining and shopping, golf courses, and its very own bacterial-infested water park — that the theme park became an unlikely backseat passenger. The Magic Kingdom was all too often a carbon copy of what came before.

When it comes to finding the 5 most important attractions of the 1970s, we have to dive deep.

Even with all the excitement of Walt Disney World, here we are still in Disneyland.

And talking about a parade for some reason.

Disney World’s Electrical Water Pageant is the true precursor to the Main Street Electrical Parade. But almost nobody cares about it.

It was only once floats started rolling down Main Street that the public lost its collective mind.

By joining thousands of sparkling lights with electrosynthemagnetic musical sound, the Main Street Electrical Parade captivated the attention of an entire generation. The parade proved so successful that both Magic Kingdom and Tokyo Disneyland got their own versions — or just flat out stole the parade from each other like a religious relic.

Most significantly, the Main Street Electrical Parade is ultimately responsible for the concept of the Disney nighttime spectacular. Without it, the whole glorious being that is Steve Davison does not exist.

The company has tried to phase it out for newer material several times. But like Dracula, it can’t be killed. Whenever they need an attendance bump, they trot the Main Street Electrical Parade back out of retirement.

You could argue that this ride is just a clone of Disneyland’s Submarine Voyage.

But those ride vehicles make all the difference.

20,000 Leagues Under the Sea is everything the original Submarine Voyage should have been. In fact, it’s hard to understand why they missed it the first time around.

It follows basically the same voyage, but layers on IP in true Disney fashion. The iconic Harper Goff submarines far outshine the original’s ominous military-gray boats. The ride pours on mystery and adventure everywhere you look, from Captain Nemo’s deep narrative and haunting organ music to the steampunk divers farming the ocean’s floor.

By the time your Nautilus gets entangled in the tentacles of a giant squid, the transformation is complete.

Sadly, the ride was closed due to maintenance reasons, handicap accessibility reasons, or giant world-engulfing sinkhole reasons — depending on which conspiracy story you believe.

All is not lost, however. The ride was resurrected in Tokyo DisneySea, which solved the maintenance problem with an ingenious twist. Too bad it couldn’t save those those beautiful Nautilus ride vehicles too.

It is in the twilight years of its popularity today, but it is impossible to overstate the impact of the Country Bears on the culture at large.

Magic Kingdom was packed to the gills with animatronic stage shows when it opened in 1971:

Originally designed for a ski resort at Mineral King by the legendary Marc Davis, the singing hillbilly bears were the breakout hit of the Magic Kingdom. They were immediately cloned at Disneyland — which doubled the theater capacity and built an entire land around it. The same happened at Tokyo Disneyland a few years later.

It seems so obvious now. Backwoods robotic animals performing on stage is a killer idea. But in the 1970s, it was so unique, it spawned an entire industry of copycats. The Country Bear Jamboree is direct progenitor of themed kids pizza restaurants like Showbiz Pizza and Chuck E. Cheese, which exploded onto the scene only a few years later.

The Country Bear Jamboree was also one of the first to change its show on a regular basis. A Vacation Hoedown version and a Christmas version of the show are still in rotation in Tokyo Disneyland.

Big Thunder Mountain hits most of the same story beats as its leisurely predecessor, Mine Train Through Nature’s Wonderland.

But it throws in a goat eating dynamite.

Big Thunder marked the first major project from the mind of Tony Baxter, who would go on to become the greatest Imagineer of his era. The art direction and rockwork of the mountain made the Matterhorn look like your sixth-grade science project.

It was a master class in tension — building dread with a slow climb through a bat cave, finishing with the whole mountain caving in around you.

Big Thunder Mountain Railroad debuted first at Disneyland, but would travel to the Magic Kingdom only a year later. Tokyo Disneyland soon followed with its own version.

By the time it hit Disneyland Paris, it had consumed all of what was traditionally Tom Sawyer Island.

Hong Kong Disneyland may have done the best of all. It combined Big Thunder with the Country Bears to give us Big Grizzly Mountain Runaway Mine Cars!

There are thrills in Space Mountain. But they are almost entirely psychological.

Though its top speed never reaches much more than 30mph, the idea of a rollercoaster in the pitch black of space has a way of captivating the mind.

Space Mountain is easily the most widely known thrill ride in the world. It appears in every Disneyland-style park except Shanghai Disneyland. If there were no such things as castles, the conical, spired show building designed by the legendary John Hench would be the most recognizable park icon ever.

The Space Mountains around the world inspire endless fan debates. Alpha side or Omega? Side-by-side seating or straddle-your-partner (who is hopefully not a single rider)? Onboard audio or silent? Ghost Galaxy or… Well, actually nobody prefers Ghost Galaxy.

Space Mountain is future cool. It is the ultimate minimalist antithesis to the highly layered details of Big Thunder (except when they clutter it up).

The number of Disney theme parks is about to double again.

If the 1970s were stretched thin by the overwhelming behemoth of Walt Disney World, the next ten years would yield some of the greatest rides in Disney history.

Come back tomorrow for the next decade in our journey.