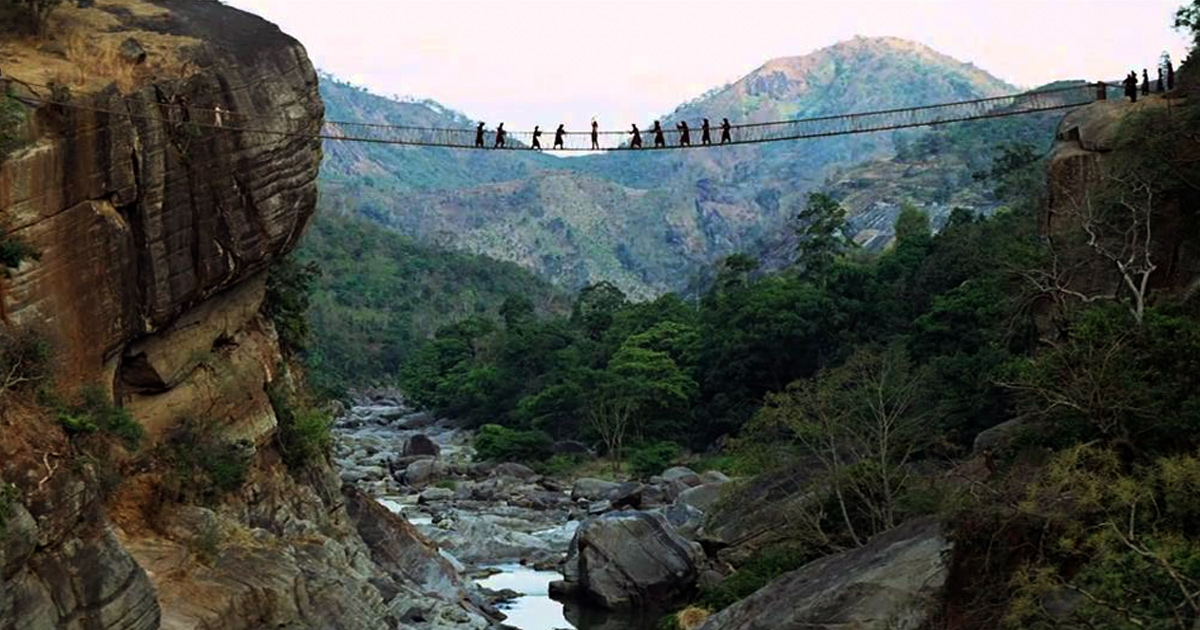 Last week I had some time to sit down with Robert Watts and listen to him tell stories about being back in Orlando for the first time since Indiana Jones and the Temple of Doom.

Robert and I had a grand time reminiscing about the good old days, in spite of the fact that he was on a stage and I was about 30 feet away in the dark.  He had traveled here as part of Star Wars Celebration V, which is a low-key gathering of about 30,000 casual fans, none of whom dress up in costumes. 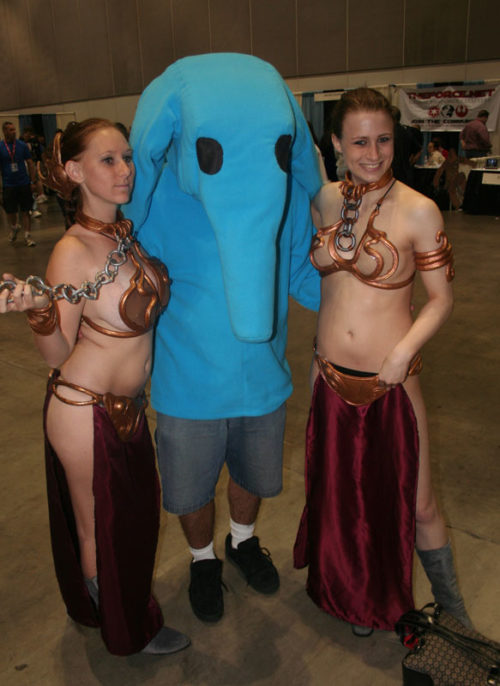 I won’t bore you with all the movie-related stuff that he said. I am quite certain that there is no market out there for behind-the-scenes Star Wars stories, and even if there were, this is a park blog. There is a slightly larger market for Twilight stories, and Robert Watts did mention that he had sold his house to a lovely couple named Mr. and Mrs. Pattinson, who later went on to literally create Team Edward.  But that is neither here nor there. 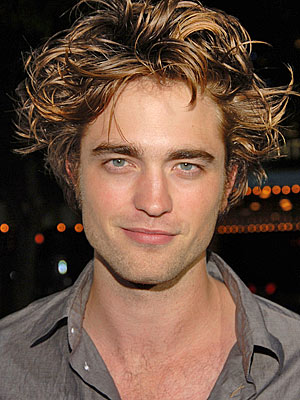 What I found most intriguing was a throwaway line from Mr. Watts about being back in Orlando for the first time since shooting Indiana Jones and the Temple of Doom in the 1980s.

This movie catches a lot of flak in the fan community, mainly because it is not Raiders of the Lost Ark.  But Indiana Jones and the Temple of Doom is still in my opinion, one of the greatest adventure films of all time — in spite of Kate Capshaw, not because of her. 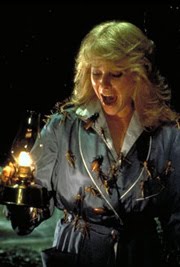 My mind was busy crunching the numbers. Indiana Jones and the Temple of Doom came out in the summer of 1984.  This was 5 years before the opening of the Disney MGM Studios and 6 years before Universal, so no soundstage or location filming there.  In fact, that’s even before Michael Eisner took over Disney.  It predates Star Tours and Captain EO, so a Lucasfilm connection didn’t even exist at that point.

What could they possibly have shot at Orlando?  Did Big Thunder Mountain stand in for the film’s climactic mine car chase?  Did Indy swipe those glowing Sankara Stones from the caverns in Pirates of the Caribbean?  Did Spielberg get the idea for the disgusting dinner scene while eating Magic Kingdom fast food?

The ill-fated precursor to the Handwich

Nope.  It wasn’t filmed at Disney at all, but at another local theme park. Gatorland. This was pure third unit stuff, insert shots of the crocodiles at the bottom of the rope suspension bridge.  They have maybe 30 seconds of screen time in total. 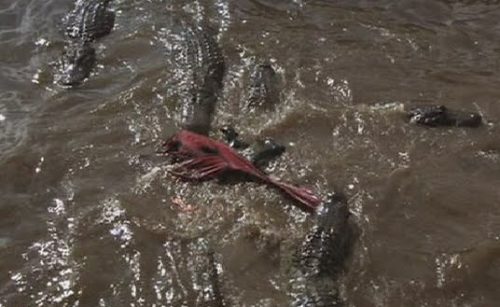 Now, every 4-year-old riding the Kilimanjaro Safari gets a lecture about how crocodiles are different from alligators, but back then, we couldn’t tell the difference.  Those same reptilian beasts that devour Mola Ram are home-grown corn-fed American citizens, who are trained to perform in a high-class show known as the Gator Jumparoo. 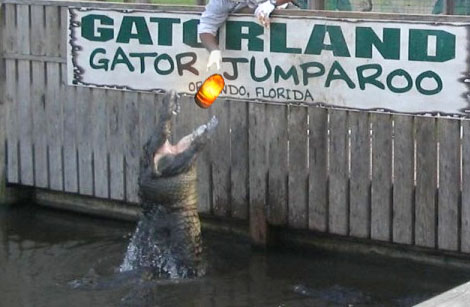 Sankara Stones are their favorite

That’s all well and good, but why should Gatorland be the only park with an Indiana Jones and the Temple of Doom connection?  Disney fans are in luck, but unfortunately, it’s nowhere near as cool as Gatorland’s link.

Just like Indiana Jones and the Temple of Doom, Gatorland will rip your heart out.

It’s basically just an interesting factoid, which Disney Imagineer Jason Surrell let slip at his panel during Star Wars Celebration V.  Sure, most people were focused on the new Star Tours promo video, but here at parkeology.com, we bring the fans what they really want:  Trivia about a 20-year-old stunt show.

The Indiana Jones Epic Stunt Spectacular is based around Raiders of the Lost Ark, all the way.  Every piece of the show is lifted from the original movie, whether it’s the rolling boulder, the Cairo street fight, or the plane explosion.  Even the music is straight out of Raiders.  But one thing was lifted from Indiana Jones and the Temple of Doom:  The screenwriters.

A married couple named Gloria Katz and Willard Huyck were credited with the movie’s screenplay (some guy named George Lucas got a Story credit).  According to Jason Surrell, when Disney set out to make a stunt show based on the franchise, Willard and Gloria were called in to write the script.  Maybe Imagineering wrote the first draft and Gloria and Willard were brought in to punch it up.  Or, given the fact that Gloria and Willard are the screenwriters responsible for Howard the Duck, maybe it was the other way around. 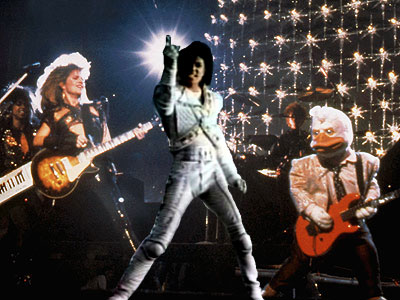 Surprisingly not that different from the Captain EO finale

How hard could it be to basically write a synopsis of Raiders of the Lost Ark?  Maybe not that hard.  But remember, somebody still has to think up all the gags, like the audience plant in the Hawaiian shirt, or the We’re-Making-A-Real-Movie stuff that allows the Cast Members to ride around on camera cranes and dolly trucks while the stunt performers do their thing.  You need real Hollywood screenwriters to pull off that kind of magic.

Incidentally, over at Animal Kingdom, they have released more details about the Adventure Tour that will soon be running in Harambe.  As part of the hard-ticket tour, you will actually get to walk out over the Nile crocodiles on a narrow suspension bridge.  Let’s just hope they don’t bring Gloria and Willard in for a polish on that one. 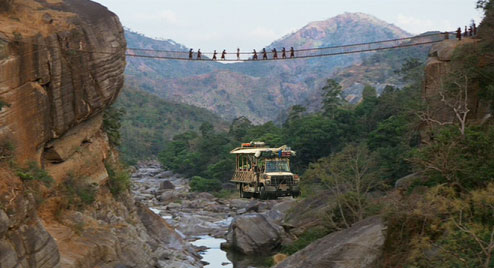