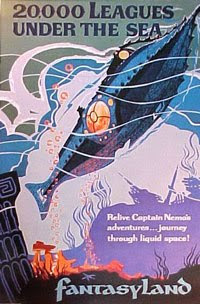 Even casual Disney fans know about the 20,000 Leagues Under the Sea Submarine Voyage that used to exist in Fantasyland’s north corner.  And if you don’t, you should think twice before roaming around that Pooh Playground.  It’s holy ground.

The subs were a great example of the type of incredible, fantastic adventure that Disney was famous for in its golden age.  No other theme park in the world would have attempted such an attraction.  But for whatever reason (maintenance, handicap accessibility, leaks, waning popularity), Disney decided to shut it down, erecting the most boring of McDonald’s Playlands in its place.

The props were sold off on ebay (or destroyed).  The coral reefs and show buildings bulldozed.  The entire lagoon filled in.  And the ride vehicles themselves — masterpieces of design — were scavenged, scrapped, and eventually ground into a landfill.

Except a few that escaped.

At least one was salvaged for use as a backdrop in various event functions.  People occasionally catch sight of it parked in some backstage area (usually at Epcot).  Two more were shipped off to Disney’s Castaway Cay, the private island for Disney Cruise Lines, where they were planted in the snorkeling area.  Hurricanes destroyed one, but last I heard the other is still there, and you can swim all around it, inspecting a piece of Walt Disney World history.  Too bad you have to travel into the Caribbean to do it. 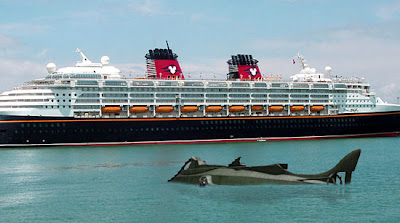 As a side note, when trying to find a good picture of this sub, I came across a truly awesome site that chronicles the 20K ride, as well as its destruction.  The site is just packed with awesome pictures and material, is extremely well-researched and I highly recommend it:  http://www.20kride.com