Walt Disney World seems to have a great fondness for sea serpents.  There are several that have appeared in various locations throughout the property.

The most fanciful serpent prowls the waters of the castle moat in Magic Kingdom.  At one time, he had a great fondness for Swan Boats, but now he just suns himself on the banks and waits for someone to notice him.

A Sea Serpent pops up during the Pirates of the Caribbean attraction in DisneyQuest.  Unfortunately, this guy is as elusive as Nessie, since I don’t have a picture of him.

A sea serpent built entirely of Legos is probably the most visible of the current sea serpents.  He has no problem posing for pictures out at Downtown Disney.

Alas, the two animatronic sea serpents are no longer with us.

This goofy looking guy oggled the passengers of the Nautilus at 20,000 Leagues Under the Sea, before Disney bulldozed his home to make way for a Pooh plaground.  Actually there were twin serpents, since each side of the sub got its own view. 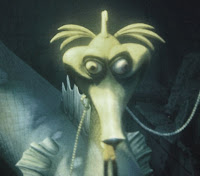 This handsome fellow was probably the most detailed.  He hunted the sailors who set out to broaden our World of Motion over at Epcot Center.  He was removed to make way for crash test dummies. 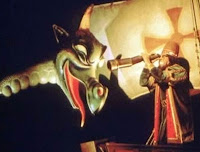