The Parkeology Challenge is the original and toughest Disney ride challenge. It was formerly known as WDW49, WDW47, and WDW46.

How did the Parkeology Challenge start?

Parkeology first conceived of this challenge in the spring of 2013. It was born out of a childhood obsession about riding all Disney World rides in one day. You can read all about it here.

Parkeology made the first official attempt at the Parkeology Challenge (then called WDW47) on June 16, 2013 — in the height of summer crowds. We completed 45 unique rides and 3 duplicates, but the challenge was not fully completed because 2 rides unexpectedly closed due to weather.

On November 8, 2014, we successfully completed this brutal Disney challenge, becoming the first people in history to ride every ride at Walt Disney World in a single day.

The Parkeology Challenge received international media coverage from various news and travel organizations, including the front page of the Wall Street Journal!

The Parkeology WDW46 Challenge was the original name of the challenge; the goal was still to ride every ride at Walt Disney World in a single day. Parkeology invited others to attempt the official challenge after we completed the challenge on November 8, 2014. 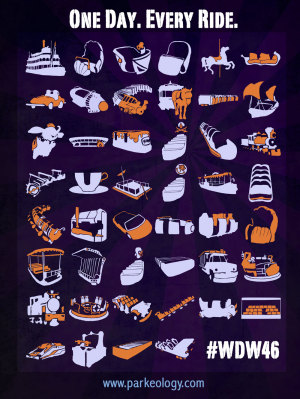 In June 2016 Frozen Ever After opened at Epcot, increasing the number of rides to 47 and prompting us to rename the challenge.

In fact, WDW47 was the original name of the challenge before there even was such a thing as an official challenge. Parkeology created WDW47 in 2013 as a personal quest and proved that the challenge could be accomplished.

During the summer of 2017, the opening of Pandora briefly raised the ride count to 49, but it returned to WDW47 again in August of 2017, when Ellen’s Energy Adventure and The Great Movie Ride both closed permanently to make room for new attractions. 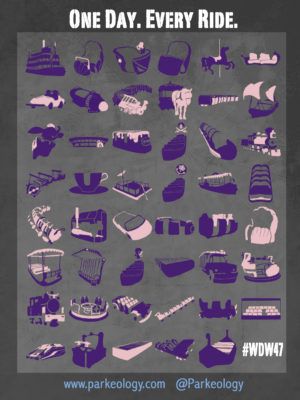 When Pandora: The World of Avatar opened at Disney’s Animal Kingdom in May 2017, the addition of Na’vi River Journey and Avatar: Flight of Passage increased the ride count to 49, prompting us to rename the challenge to the WDW49 Challenge.

Though the total ride count has changed over the years, there are many other variables which affect the difficulty. Parkeology firmly believes that all versions of the challenge are equally difficult, regardless of ride count. We do not believe in competition among the challengers. Only competition against the challenge.

In August of 2017, Ellen’s Energy Adventure and The Great Movie Ride both closed to make room for future attractions. This brought the ride count back to 47 for a few months.

However, the opening of Toy Story Land at Disney’s Hollywood Studios brought 2 more rides into the fold — Slinky Dog Dash and Alien Swirling Saucers. The ride count returned to 49 in June 2018 and the challenge was renamed to simply The Parkeology Challenge a month later. 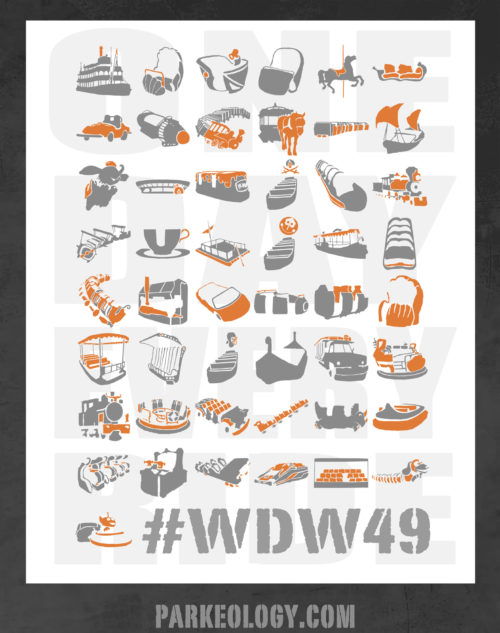 This is the original Disneyland version of the Parkeology Challenge. It was introduced in December of 2017 and follows the same structure as the Walt Disney World version. Every ride at both Disneyland and Disney California Adventure in one day.

When King Triton’s Carousel of the Seas permanently closed, the ride count at Disneyland Resort dropped to 54. This version of the Disneyland challenge lasted only a couple months before being included as part of the Parkeology Challenge.