We interrupt our normal postings to deal with an ongoing issue here at the Parkeology offices.  We have already apologized profusely, but it seems there is just no pleasing some groups.

Some of our newer readers may not be familiar with this feud, so first a bit of history.  Back in January, we endeavored to pay homage to our mythological brothers from under the oceans, a type of animal known as the aquaticus serpentinus.  We thought it might be fun to chronicle the various occasions of these creatures appearing on Disney property, and did so in a post appearing here. At that time, we were still using the polite term Sea Serpent, but after the headaches and anxiety brought upon us by these mythic beasts, we are sorely tempted to refer to them by what must surely be their true nature: the Sea Monster. 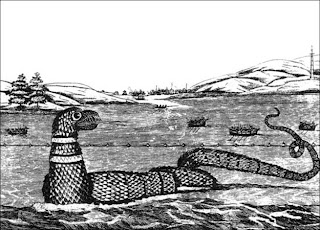 Noble. Honorable. Charitable.  Yeah, I’m talking about the guys in the boats.

It was never our intention to insult this species, but we inadvertently did so by omission, prompting a series of angry letters, first from Scales, the serpent residing at Port Orleans, then from the Electrical Water Pageant serpent.

As several months have passed since our last exchange, we thought that we had put this issue behind us.  But following last week’s post regarding Animal Kingdom’s lost water temple, another serpent has appeared from the woodwork to take umbrage at our omission — even though we clearly stated that more posts would be forthcoming about the secret map Teevtee and I discovered.

Here is the latest in a long line of insulting, insinuating, and frankly childish letters from a member of a once proud race.  It is printed here in its entirety — with no editing — so you, the reader, can understand our challenges in dealing with these creatures.  We have also reposted the relevant portion of the secret map, to provide a point a reference. 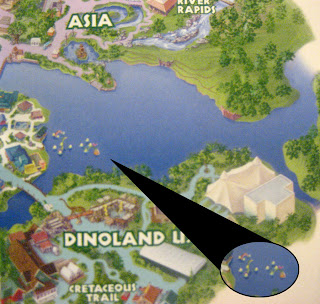 
Is you guys brain dead?  After you hurt my cousins publicly, you forget me.  I am right there on that map you ppl posted.  Yet you choose to look at silly temple.  I looked at silly temple for days.  I was only serpent in whole Animal Kingdom.  Yet you forget me.  I have half a mind 2 eat you as my supper. But I no has fork.  And no hands either, so only teeth.  It is hard work being a sea serpent to have yourself neglected by moron blog ppl.  Now I am major rock star you still blog don’t worry about me, I can have any blogger for supper I want.


Ha ha hope you guys feel bad you should.

Yes, obviously we editors are the stupid ones for neglecting to mention Flametree.  We humbly accept our rebuke and do not intend to stoop to Flametree’s level by pointing out that he no longer exists in Animal Kingdom.  Nor will we point out that he talks like an LOLCat.

Flametree barely qualified as a sea serpent in the first place.  He was mainly a water feature, for crying out loud.  You could see him from the patio seating area of the restaurant for which he was named, as well as from the Discovery River Boats.  Not many pictures exist of him, because frankly, who would want one?

If you’re desperate for a real picture, then go to somebody else’s site.  Check out allears.net for a small pic of him (more notable for the Asia construction in the background).

Youtube also has a video of him here.  He shows up around the 5:50 mark.  But seriously, this video is much more interesting because of its close-up zoom of the secret water temple, occurring at the 3:25 mark.

Hopefully Flametree is now appeased and can go back to being a “major rock star” (whatever).