When it comes to mythical beasts, dragons are royalty.  Unicorns are upper class, a little bit snooty, sort of pampered.  Griffins are middle class, your sort of everyday run-of-the-mill hybrid creatures, and jackalopes are like the serfs tending to the fields and making jokes about the unicorns behind their backs.  The other mythical beasts fall somewhere in the middle (except sea serpents, who are a bunch of pathetic losers).

Dragons are the ones that everybody loves.  They fly, they breathe fire, they horde gold.  They’re just like capitalists, if capitalists could fly and breathe fire. 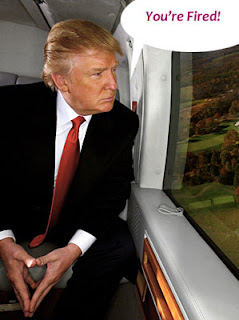 When it comes to fantasy stories, dragons always make an appearance.  Want to frighten a small village?  Call in a dragon.  Need to trap a princess in a tower?  Give her to a dragon.  Want a knight to prove his worth?  Ask him to alphabetize the periodic table … while playing chess with a dragon.  And since Disney and Fantasy often go hand in hand, it may surprise you to learn that in all of Walt Disney World’s magical theme parks, there are only four dragons.

Apparently dragons are territorial.  This may come as a shock to anyone who has not felt the crunch of his predecessors’ bones beneath his boots on his way to a dragon’s cave, but it’s true.  When Disney World came along, the Dragon Congress got together and decided how they were going to divvy up the parks.  According to old dragon bylaws, each park can contain only one dragon king.  All other dragons were strictly verboten (a dragonish term meaning “tonsils” — dragons are not very good at vocabulary, but sometimes luck into phrases that actually make sense).

Long time Disney fans know that Animal Kingdom included a dragon from the very beginning.  A dragon still appears as part of the logo and a dragon head can be found above one of the ticket booths at the entrance to the park.

There was in fact to be a whole land known as Beastly Kingdomme, a realm of mythical creatures which featured a major thrill ride known as Dragon Tower.  Animal Kingdom was like a junkie in need of a capacity fix, but when the economy tanked shortly after Animal Kingdom opened, the expensive new land was axed in favor of a spinning coaster, a Dumbo clone, and the largest orange dinosaur money can buy.

Beastly Kingdomme rumors still pop up from time to time, but the Dragon Tower coaster is probably off the drawing boards, since another local theme park already has a similar ride, called Dragon Gravel Parking Lot. 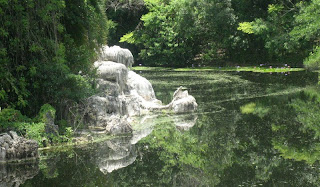 Dragon cave, from the Harambe side.

But while the Tower never did emerge, a Dragon King nonetheless rules the Animal Kingdom.  His lair is hidden now, around a secret bend of the river that was once plied by the Discovery River Boats.  As the boats traversed the waterway past Camp Minnie-Mickey, they would encounter the Dragon King himself, apparently in a bit of discomfort after consuming a meal of Mexicans Mexican food the night before.  Large blasts of flame would spurt from his cave as the boat passed, and you could hear his ferocious growls.  Now that the River Boats are long gone, the only evidence of him is in a rock sculpture on the banks of the river, visible only from the Camp Minnie Mickey bridge. 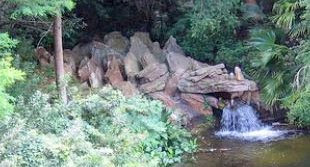 Epcot also had a dragon from day one.  He was a friendly little feller, with two tiny wings, horns of a steer, and royal purple pigment.  That’s right, it’s famed naturalist John Muir. 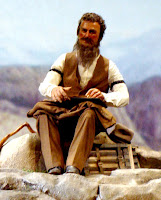 No, no, of course it was Figment, the star of the Imagination pavilion.  Unlike his brother over at Animal Kingdom, Figment is a happy dragon, and a rather inquisitive one at that.  He has become one of the most beloved of all park characters, and even possessed a bit of political savvy, staging a comeback after he had been deposed for a few years following a disastrous rehab of Journey Into Imagination

Figment still delights guests to this day, with such magical experiences as blaring train horns and skunk smells.  Hey, blame the writers; it’s not his fault.  He also leads the way in Epcot merchandising, with his own keychains, plush dolls, figurines, t-shirts, and nose hair clippers.

At first, it’s hard to remember where the Dragon King of the Studios lives.  But he’s not really hidden at all.  He’s out in the open, playing host to one of the park’s core attractions.  But his presence is strictly a two-dimensional one.  He’s also one of two dragons on this list to star in his own motion picture. 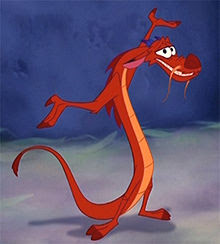 Mushu the Dragon was Mulan’s funny, tiny sidekick, a dragon with a heart of gold.  As he explains in the Magic of Disney Animation, he was originally supposed to be a two-headed dragon, but animators killed the idea when they realized that having two Eddie Murphy talking heads in the same movie might be like watching Norbit and Pluto Nash simultaneously.  For this, they were nominated for a Nobel Peace Prize.

To be fair, Mushu’s show is funny enough and informative, without going on too long.  Its major downside is that it can’t live up to the original Back to Neverland, which featured an animated Robin Williams.  It does beg the question of what else might be different if Eddie Murphy replaced Robin Williams. 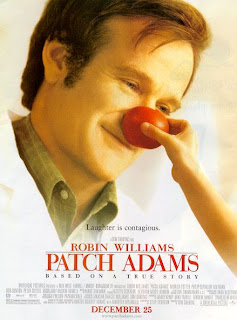 If you thought it was unwatchable before…

By now you’re probably wondering why Mushu is the king, and not Maleficent, who reigns over Fantasmic.  The answer is simple:  I forgot about her until after this article was mostly written.  But also, she appears only on select nights.  Plus, she’s really a fairy who happens to take dragon form.  Plus, she’s female, so she can’t be a king.  Please circle whichever excuse works best.

Of all the Disney parks, one might expect the Magic Kingdom to have the strongest dragon presence.  It is after all the land of fairy tales and make-believe.  If this were Paris, we’d have no trouble finding the dragon, since he lives in the basement of Sleeping Beauty castle, and is probably the best animatronic dragon ever created.

But believe it or not, the Magic Kingdom had been without a dragon king for some time now, and only recently did he regain the crown.  With the return of the Main Street Electrical Parade, Elliot the Dragon now blows smoke and disappears for crowds every night, like the mob snitch that he is. 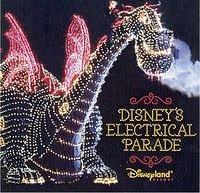 I have a great fondness for Elliot, mainly because of the disappearing gimmick, and the fact that his movie has faded into obscurity.  At the time when the Electrical Parade was being created, Elliot would have been a major new Disney star, that last gasp of 70s animation before the 80s came along and nearly destroyed everything.

Do kids today even know who Elliot is?  I doubt it.  But he’s still the highlight of the parade, and a wicked cool sight to see coming down the darkened Main Street, smoke pouring from his nostrils.  It’s pure Disney magic.

If only I could remember the name of the boy who owns him.