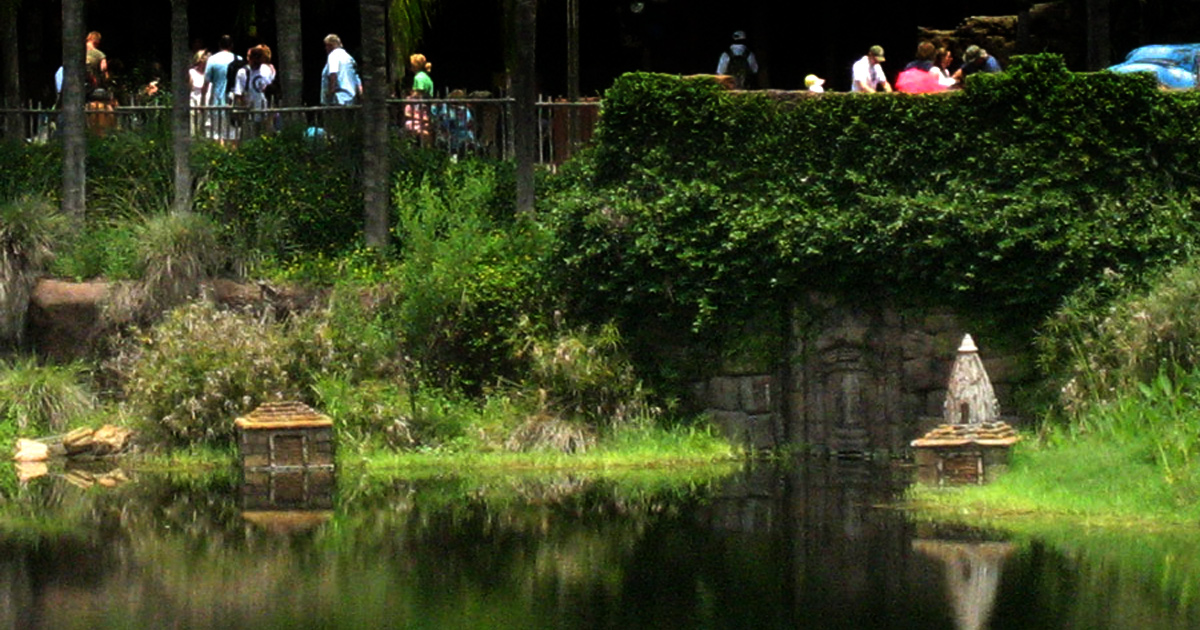 For some time now, daring Parkeologists have been hard at work tracking down a fabled treasure — the Lost Water Temple of Animal Kingdom.

One periodically heard rumors of it. Obscure references turned up in ancient Incan tablets, or in a manuscript fragment discovered in some European abbey, or in one of those original stapled guide maps from EPCOT.

But in the Parkeology community, the treasure was thought to be a myth. Fool’s gold. The ramblings of a crazy person.

Animal Kingdom was always intended to a be a mysterious place. When it first opened in 1998, directional signs were scarcer than a Survivor contestant on Tax Day.

The designers felt that the park should be someplace to explore, with surprises around every corner.  Turned out, people couldn’t find the animals, the rides, or the exit. And they made sure to give voice to this problem (in a bit of irony, they had no problem locating Guest Relations).

Signs eventually popped up telling you THIS WAY TO DINOLAND and THAT WAY TO LION KING and DON’T BOTHER WITH DINORAMA.  Everyone soon settled down and had themselves a grand time.

But some things remained lost.

Late one night, Teevtee and I were cataloging some of the artifacts in the west wing of Parkeology headquarters, when we stumbled across a cardboard box containing some ancient Disney promotional materials.  Casually flipping through them, we discovered a fragment of a map from Animal Kingdom’s early years.  It was embedded in the middle of the Animal Kingdom Field Guide, an unassuming little compendium of animal species and various plants (so obscure that Amazon doesn’t even have an image available).  When we examined the map more closely, we couldn’t believe our eyes.

The hidden entrance of Animal Kingdom’s lost water temple stared back at us from the page.

Above is the fragment of the map, with an inset showing the lost water temple entrance.  Now there are about 3 or 4 other things on that map of interest to Parkeologists, and we’ll cover them in future posts.  But the temple is the most eye-catching, particularly because it is shown to exist in a non-accessible area.

At the time of this map, Asia had opened, but Expedition Everest was still many years into the future –not even on the drawing boards yet.  All land to the east of the gibbons exhibit was strictly off limits.  There was no pathway looping around the lagoon, no bridge connecting Asia to Dinoland.  It was all Animal Kingdom wilderness.  And in the middle of this jungle, perched on the water’s edge, someone had marked the location of the hidden water temple.

With the location in hand, I visited Animal Kingdom several days ago, in an attempt to track down the entrance.  That entire area on the map is now filled with throngs of tourists, working their way to the main E-Ticket attraction of Expedition Everest. The barren green steppes and ridges that appear on the map have given way to thick vegetation, masking the stair-step nature of the land.  There are no Discovery River Boats to ply the lagoon. The plants on the Dinoland side have grown in as well, making a view of the Asia coastline difficult at best.

But the lost water temple is still there, hidden behind a canopy of moss, guarded by two crumbling columns in the water.  Is the fabled treasure inside?  There’s only one way to find out.  Even now, we are planning an expedition into this sacred edifice.  The way is fraught with danger, and of our success, who can be certain?

But we are going in there, and we intend to come out with all the secrets of the Kingdom.  So stay tuned.  Our tale will continue…