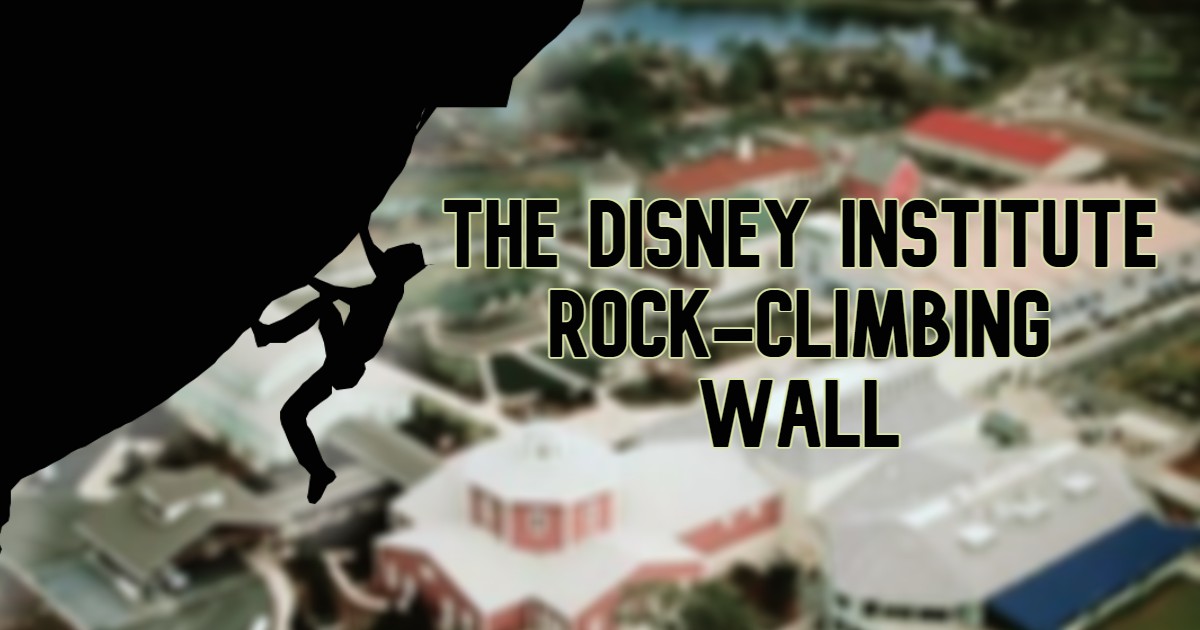 In 1996, Disney CEO Michael Eisner conceived of a new type of vacation. They called it the Disney Institute.

It was based on his own childhood memories of Camp Keewaydin, his wife’s love for the creepy hamlet of Chappauqua, NY, and other playgrounds of the rich and famous. And so a corner of Walt Disney World was set aside for this new enrichment program.

Situated on 40 acres of prime resort territory, the Disney Institute consisted of a series of bungalows along a picturesque lagoon.

Nestled among the lush green “thinking gardens” and serene gazebos were facilities of every kind. Kitchen classrooms, Performance theaters, Art studios, and…

Of all the disparate elements in this one-of-a-kind vacation destination, the Disney Institute rock climbing wall was the pinnacle of the Institute experience. Forget mom’s all-day wine class/drinking excuse, and dad’s overwrought attempt to bring Streetcar to life on the stage. Here was the one offering that seemed to jibe with Disney’s adventurous outlook on life.

A brief perusal of the marketing materials of the time reveals nary a one that does not feature some stock photo of this towering slab of unscalable rock. The Disney Institute climbing wall was rumored to be a cliff out of its element. A monolith to human brilliance.

This rock wall was so incredible, Disney took the time to carve out a literal segment of a California mountain, just so they could mold the perfect rock-scaling experience. Or at least someone in Imagineering told Michael Eisner that’s what they did.

Then the state-of-the-art sands of time erased it from existence.

The Hunt for the Disney Institute Climbing Wall

In 2015, Parkeology in conjunction with the Society of Budget Sherpas mounted an expedition into the wilderness of Lake Buena Vista in an effort to discover the remains of this hallowed rock-climbing tower.

It’s exact location is unknown. Ancient maps of the Disney Institute place it on the Northeast corner of Willow Lake, in a plot of open wilderness between the resort and Lake Buena Vista Drive.

Today, this land houses the Carousel complex, a series of hotel rooms and amenities. And an additional man-made lake, not shown on the map above.

The open wilderness from the days of the Institute has vanished, and with it the Lost Cliffs of California. There is no sign either of the amphitheater that used to stand in this spot. All we have is an odd, flat berm that blocks the view of the road from the hotel.

Thinking that the berm might hold the ruined bleachers of the amphitheater, like an old Roman Coliseum, Parkeology summited the hill. What we found on the other side will shock you.

A few candidates stand out as potential sources of the lost climbing wall’s location. This “Thinking Garden” is unusually square, dotted with angelic statues, reminiscent of an ancient cemetery.

Stranger still is this Carousel gazebo. The map lists it as a barbecue area, in spite of only a single pathetic, rusted grill apparatus. The two-dimensional cut-out horses circling the gazebo outnumber the barbecuing tools 4 to 1. Parkeology attempted to mount these horses to see if they would lead us to the secret Disney Institute rock climbing wall, but the horses are unfortunately stationary. And we found the two-dimensional saddles to be extremely uncomfortable.

Nearby is a quiet fountain, whispering like the ghosts of the past.

It seems that the lost cliffs of California have vanished, crumbled into dust like the mudslides of their homeland.

Or more likely, the structure sank into that retention pond like the lost city of Atlantis.

As Parkeology made its way around the Carousel area, we could not help but notice the strange chunks of rocks that dotted every cluster of shrubs and marked every twist and turn of the sidewalk.

These rocks are oddly flat on many sides, with notches resembling intentional hand holds. Presumably they are decorative, excavated from the site of the hotel. Yet they are very different from the fossilized corral often turned up in the Florida beds.

Do these fragments of hand-cut rock represent the last remaining pieces of the lost cliffs of California? Or is it merely coincidence? You be the judge.

It is strange that the highest concentration of these flattering slabs exists mainly in the area around the Carousel buildings. As one moves deeper into the resort, into the more historical district, the granite slabs begin to disappear.

Perhaps underneath one of these solemn chunks of hardened matter, a belay line is still anchored to the core. Or a plastic foothold is still chiseled into the side, waiting for the day when the rock will turn over and all will be made known.

Until then, we have only our memories of a bygone era. A time when man could dream of a vacation to touch the sky… and scale the Cliffs of California to make it happen.