Another great write-up from Teevtee today, with one of the truly hidden spots in Animal Kingdom.  I remember we both found this area within a couple months of each other, and couldn’t believe it actually existed in a Disney park. Enjoy!
———————————-
For many fans the idea of being in a Disney park and yet somehow isolated holds a strange appeal.
Sure, any old tourist can go tramping down Main Street, Some may venture out to Tom Sawyer Island for relative seclusion and a few may even sneak back to the butterfly hatchery in Epcot’s United Kingdom pavilion to feel really isolated.  But how about being smack in the middle of one of the Major Disney parks and yet still being TOTALLY alone.  I mean middle of nowhere alone.  I mean you might as well be 1,000 miles away alone… and yet this is totally part of the designed Animal Kingdom experience, or at least it once was. 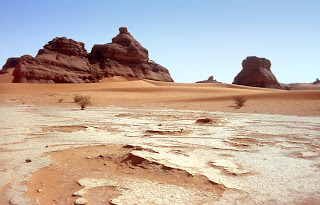 “Where the heck is Pizzafari?!”
Sound interesting?  You won’t find this on any map and over the nearly dozen years that Animal Kingdom has been open it seems to have been all but forgotten, but there is in fact an isolated secret area at Animal Kingdom that is still there and ready to be explored by the very few who seek it out.
Situated between the Africa and Asia sections of the park is a major artery for pedestrians to traverse between these two lands.  For many years even this huge walkway felt somewhat hidden. Before Asia was anything more than a small bird show and an exceptionally well themed (and seldom opened) Coke refreshment stand there was little reason for most folks to pass between these two areas of the park.  In what turned out to be a real shame most visitors rushed through Animal Kingdom in a few hours when the park was new (or even now for that matter).  They scurried from the Safari to the Lion King Show and never bothered to explore the incredible details that Animal Kingdom offers.  They had little time to be bothered to walk from Africa to Asia if there was no major ride over that way (now of course there are several). For years this path was a pleasant and quiet affair. 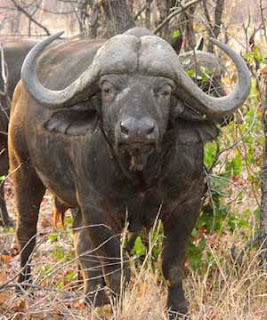 What most did not realize is that branching off of this thoroughfare was a much smaller, hidden path.  The path was paved but much narrower, somewhat overgrown with bamboo and really felt quite isolated. This hidden path was often considered a bit of a mystery… sure, it was sometimes marked on the official maps and other times not but finding it always felt as though you stumbled upon a little secret… one of those magical places at Disney where you could be all alone while surrounded by tens of thousands of people… eerie almost.

Then at some point 6 or 7 years ago Disney decided to take this hidden gem and throw some benches on it, trim back the foliage and call it a designated smoking area.  Coupled with the now greatly expanded Asian section this once private sanctuary became a smoky, crowded, marked and very unhidden stopover for masses of folks needing a butt on the way too or from Africa and Asia.  The secret hidden path of lore was lost forever….
Or was it?
You see… THAT was never the hidden path.  No, there was and still is a truly hidden path, a path off of THAT path… a path that today hardly can even be called a “path” as it is really an unpaved, unmarked trek through the back woods of Animal Kingdom and it is awesome.
At one point in time Disney wanted you to find this path off of a path off of a path.  The little trail had a small sign marked something like “Buffalo Trail” at its entrance.  While I never saw this sign personally I am told that it was only there for a short period of time (and it makes little sense as the path is so small, unpaved and out of the way that a buffalo would never fit anyway).  For most of its existence it has been totally unmarked, unacknowledged by Disney, unseen in any guidebook and a true secret of the park. 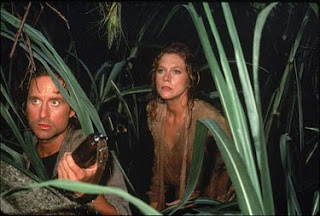 “It’s okay, it’s a designated Smoking Area.”
Over the years as Disney has relocated the smoking area, the foliage covering the “Buffalo Trail” has grown thick and Disney has made no efforts whatsoever to groom it back.  I wonder if the current management is even aware of it… but if you walk along the former smoking path and look closely you should be able to find a point when the shrubs seem to allow one to pass through.  It will feel as though you are going someplace off limits, totally backstage, and yet you are not.  Once you hop over the bushes you will be surrounded by nature (or a carefully planted version of it) and FAR from the hustle and bustle of the rest of the park.  As you follow the “path” you will come across a stream… and this is important… in that stream Disney has been so kind as to place artificial rocks which create stepping stones for you to traverse the waters on.  This is the one sign, the one acknowledgment that this is an intentional, man made path, a place where you are allowed to be and yet where virtually no one has ever gone.  This actually takes a little bit of nerve to access, at this point it is so overgrown that you may feel a little odd pushing through shrubbery to access the leaf strewn dirt clearing that lays beyond but that just makes it all the more fun.  This is one part of the park that truly meets the original designers goal of creating a sense of exploration and adventure and rewarding those few who take the time to find the magic in this incredible park.
I have no doubts that someday some idiot will do something back there that will cause Disney to fence it off for good.  I am almost hesitant to even write about it because I don’t want that day to come… so the next time you are in Animal Kingdom see if you can hunt down the path… then be respectful, don’t tell anyone about it and lose yourself in the most hidden of hidden areas at Disney. 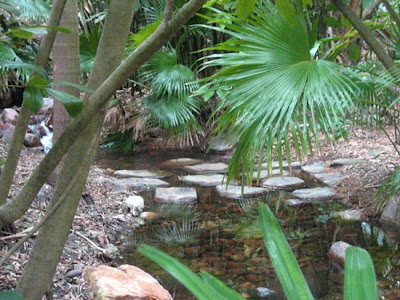 An actual picture of the super secret Buffalo Path, snapped from the bridge of the sort-of secret Smoking Area path.