There are several visual gags right at the exit dock of the Jungle Cruise.  Those wonderful Disney name puns show up on a chalkboard, and there’s that cage with the bent bars, obviously for holding gorillas (or small children).  But my favorite detail doesn’t look like a joke at all, and unless you are intimately familiar with the Disney movie canon of the 60s, you won’t notice anything special.

Piled up on the dock are several crates, labeled with various shipping destinations.  Here’s one: 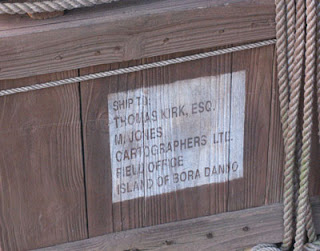 This crate is an homage to a Disney Legend.  Thomas Kirk, better known as Tommy Kirk, appeared in classic Disney films like The Shaggy Dog, Swiss Family Robinson, Babes In Toyland, and Old Yeller.  And what makes this crate even more amusing is that this crate doesn’t reference any of Tommy’s classic films at all.  Instead, it highlights the boy-genius character of Merlin Jones, from the not-so-classic 1964 film The Misadventures of Merlin Jones, and its not-so-classic sequel, The Monkey’s Uncle.

Neither of these movies have anything to do with Cartography, Jungles, Cruises, or an Island of Bora Danno, but them’s the breaks.  The only link is perhaps the fact that this is Adventureland, and Merlin Jones had himself some Misadventures.  That and the fact that Tommy Kirk had a major role in one of the greatest adventure films of all time, Swiss Family Robinson.

There is a theory out there that the Island of Bora Danno is actually a reference to Tommy’s movie brother in Swiss Family Robinson.  James MacArthur later gained fame on Hawaii Five-O as detective Dan Williams, leading to the oft-repeated phrase “Book ’em, Danno.”  This is as good a theory as any, as I can find no reference to an Island of Bora Danno anywhere in the known universe.  But it seems like a real stretch to me.