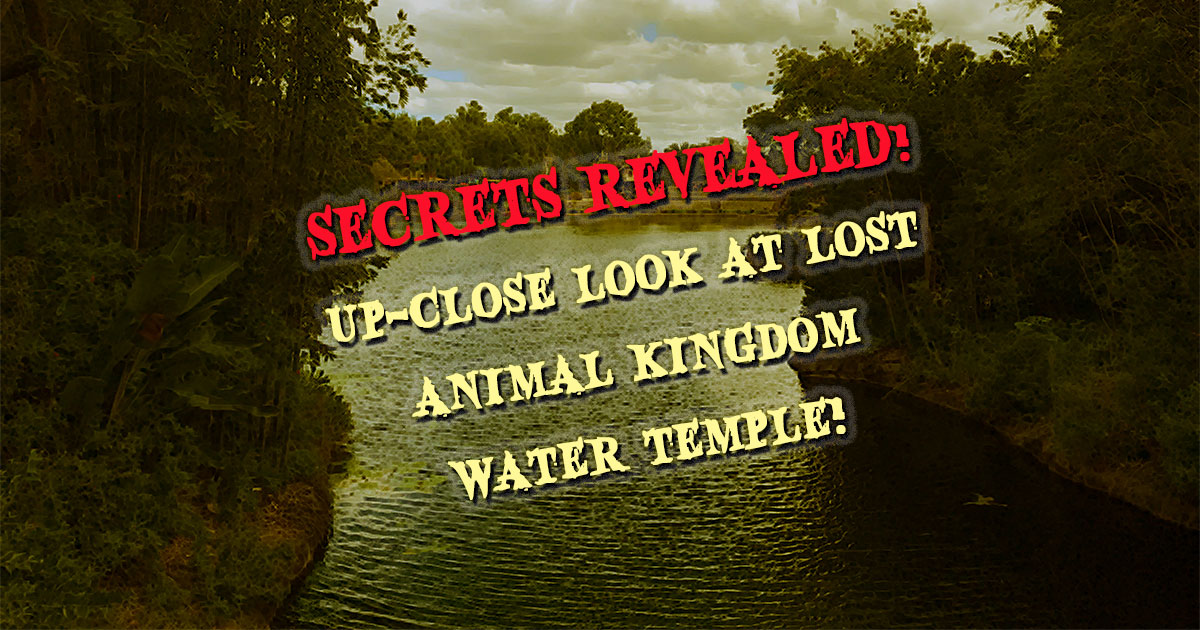 In what is sure to redraw the battle lines between history and myth, a recent expedition to the remote Rivers of Light viewing area has delivered an unprecedented glimpse of the Animal Kingdom Water Temple.

What they found sent shock waves through the industry.

Once thought to be a legend in the vein of El Dorado, the Lost City of Atlantis, or the Fabled Sunken Island of Disney Springs, the Animal Kingdom Water Temple has long captured the fancy of Parkeologists around the globe.

For more than a decade, many have considered the water temple a fool’s quest, like the Loch Ness Monster or the Sea Serpent who once shared the temple’s lagoon.

According to Dr. Harold Farthing, Parkeologist Emeritus (2012), any attempt to explore it was “a folly to rival the great Disney Institute climbing wall as the most ridiculous pursuit in our brotherhood.”

Heretofore, searchers have experienced only fleeting glimpses across a great watery expanse. But the Rivers of Light viewing team discovered a new path that put guests almost on the temple’s very doorstep.

This offers the most conclusive and up-close look at the hidden shrine since boats once plied the water’s edge many decades ago.

According to the Rivers of Light viewing team, the northern-most point of the seating area abuts the corner of the Animal Kingdom water temple.

Rivers of Light is a nighttime spectacular and often packed with people. One might expect low visibility to this area. And in dark conditions, no less.

But fortunately, the entire Rivers of Light viewing area is available during the heat of the day. Animal Kingdom travelers often enjoy a light rest on the bleachers.

Using this free availability, the Rivers of Light viewing team was able to get closer to the water temple than was ever previously imagined. Their photos reveal stunning, never-before-seen detail on the temple facade.

The boat in the foreground is used during Rivers of Light. It is accessible from a dock very near the water temple. You can also see a Cast-Members-Only path with lighting.

Pedestrians continue to use the sidewalk above the water temple. There’s actually a souvenir shop perched directly above it, selling Yeti Kitties and the like.

But of even greater interest is the temple facade itself.

The water temple is clearly a shrine to Lord Ganesha, the famous Hindu deity with the head of an elephant. This is a typical pose, showing him seated with one of his arms raised.

Though it is difficult to confirm, this appears to be a four-armed version of Ganesha. His appearance — which predates even the existence of Asia — foreshadows the strong Indian subcontinent influences in this area of the park.

Even after Asia opened, the water temple area remained unapproachable until Expedition Everest debuted nearly a decade later in 2006.

The Purpose Behind (Or Inside) the Animal Kingdom Water Temple

Many Parkeologists have longed to know what lies behind the doorway shown above. Is the inner sanctum of the temple accessible?

Early photographs of Animal Kingdom under construction show the existence of the water temple. But they reveal little about its purpose or function.

This article by the Disney Parks Blog offers the best view yet — though at pitiful resolution. It shows Asia under construction, with the water temple facade glimpsed in the distance.

Note the pair of decorative columns in the lagoon (now gone), as well as the barren hills would one day become the Rivers of Light seating area. But the walls of the temple itself are just a shell, designed as a retaining wall. There is no evidence here to suggest an interior structure.

In the early years of the park, this section was only visible to guests from the now-defunct Discovery River Boats or as a vista across the lagoon from the Theater in the Wild.

It all begs the question: Why is the water temple here in the first place?

One prevailing theory involves a nearby ride.

See that dark brown bend in the ground directly behind the water temple? That is the climactic drop on Kali River Rapids.

As your raft exits the scene with the logging truck, it plunges down a 30-foot drop and splashes down near a series of geysers. It then makes a hard right turn and parallels the lagoon before eventually winding back to the Asia loading dock.

Perhaps the runoff cascading down the Kali flume requires some sort of disguised emergency drainage that filters out to the lagoon via duct work disguised by the water temple.

The presence of a prominent circular grate directly behind the elevated souvenir stand adds credence to this idea. Where is this draining, if not out to the lagoon?

Or maybe it’s all coincidence. There certainly isn’t any outflow in the close-up picture of Ganesha. One just never knows. Perhaps it only activates when the Kali drop malfunctions. With Kali River Rapids currently under refurbishment, it’s impossible to monitor.

But plumbing or no, one thing is certain. There is no interior room hidden behind the facade of the water temple. Just back-filled earth with a souvenir stand on top for good measure.

The door, as it turns out, is not a secret door at all.

Take one more look at that first picture of the water temple as glimpsed from the Rivers of Light viewing area. Ignore the Ganesha sculpture for a moment and look at that Cast Member path.

Do you see it? All the way to the right of the picture is a nondescript wooden door, set into the temple wall. Maybe this is the secret entrance we’ve been searching for all along. A portal to treasures untold, or perhaps the Tri-force of Wisdom.

As it turns out, the answer is a little more pedestrian. This door is relatively new.

It did not exist in the earliest pictures of the Water Temple. It was added during construction of the Rivers of Light seating area. So what is it for?

Return once again to the aerial photo above. You can see a square set of walls bridging the water temple and the Rivers of Light viewing area. You can even see that the top of this structure is hollow, with some mysterious orbs inside.

This structure actually houses one of the lighting towers for Rivers of Light. They raise during the show and retract back down into the water temple when not in use. The hidden door is for servicing this particular tower.

So now we close the book on the long saga of the Animal Kingdom water temple. It was surely one of mankind’s most enduring mysteries and we will always remember it fondly.