Usually we tend to be a little smarmy around here at the Parkeology offices.  We lace our posts with humor, sarcasm and even (though often unintentionally) some wit.  You know, we’re cool like that.
On occasion we might become obsessed with something as we recently saw with Franco-American week  month (stay tune for Shane’s upcoming report on Didi Conn). When that happens we like to take a deeper look into things, revisit them and explore them more than ever. 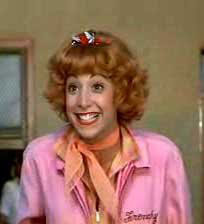 Coming soon to Parkeology.com
Such is the case with our previous post about being lost in Animal Kingdom.  The overwhelming response to that post brought our servers to their knees, crushed by the traffic flow (of course we are cranking this baby out on a Commodore Vic-20, but still). 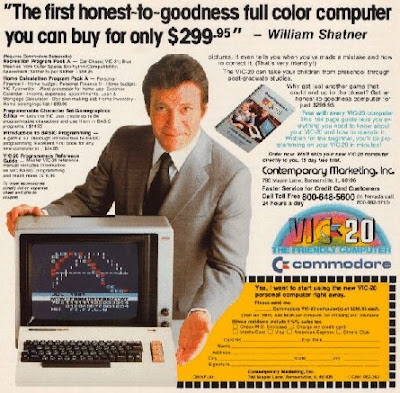 Not to be outdone, I can post random Star Trek references as well.
We decided to take a recent field trip back to the far depths of Animal Kingdom in order to update the post with a few photos and what we found was shocking!  Not as shocking as this but still pretty sad.
It looks like the party may be over as Disney has recently planted foliage blocking both sides of the path.  Additionally they have thinned out some of the plants and foliage from the path making it much less hidden in parts than it once was.  It looks like Disney is trying to eliminate the carefully designed secret hideaway.  First they added character greetings along the path off the main path, now they are covering the hidden path altogether.  Judging from the relative small size of most of the new plantings these were recently made changes.  I wonder if our previous report may have urged them along? 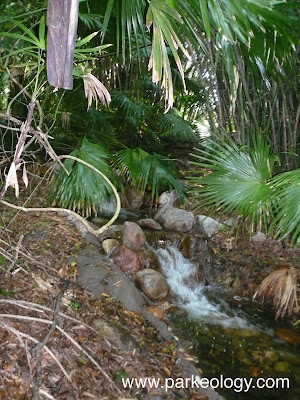 The falls up close and personal, a view Disney does NOT want you to see.
Seeing a piece of the park slip away is never fun but we caught this one just in the nick of time allowing us to venture back with camera in hand to document the most secret public part of a Disney park ever created before it is lost for good.
Put on your Parkeology pith helmet and lets take a little adventure.  We are starting off in Africa and headed over to Asia, as we start down the main thoroughfare we notice a path branching off to the left.  This once was a seldom used secondary route, then became a horrid smoking area and is currently a character greeting zone. 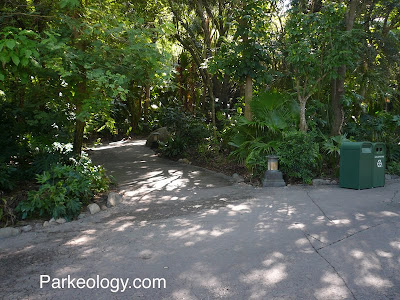 It’s OK to come here, but only if you like foam heads, nicotine or adventure!
It’s no longer “secret” and in fact is in constant use by costumed characters being led around by polo and khaki clad handlers but some people are still too lazy to check it out.  Start heading down this path though and you will come to the real secret.  We have outlined the secret trail in red because we are just that thoughtful.  By the way, these shots were just taken a couple days ago (mid June 2010), it will be interesting to watch how it changes. 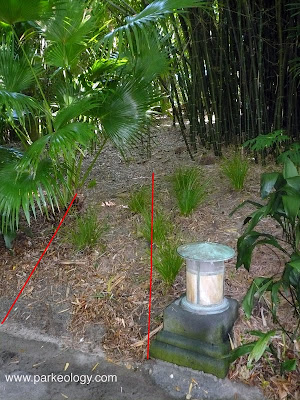 It looks pretty obvious in these photos but the entrance
to the path is hard to see and now obscured by new plants which soon
will cover it completely.
Hang a right once you get to this light and you can barely see a clearing.  It feels as if you are doing something wrong and frankly you may be at this point… but it was once intended to be open to all AK guests. 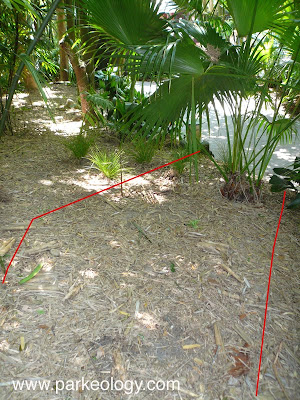 Looking back we can see not only the smaller grass like
plantings but also a large palm blocking the way.
Don’t give up now… keep pressing forward.  The ground is now dirt and some mulch, the path is overgrown and yet some of the plants to the side the shield you from the paved pathway have been cut back leaving you vulnerable feeling at times. 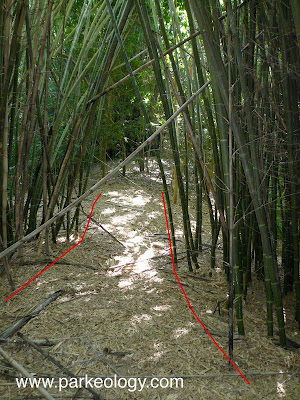 The REAL Adventureland!
This looks nothing like a Six Flags park, the Magic Kingdom or even the rest of Animal Kingdom.  It actually looks and feels quite a bit like a jungle. 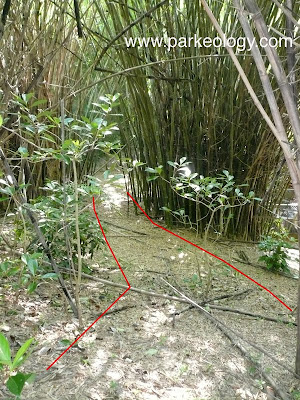 The path continues along veering close to some back stage
areas, though a berm and fence keep you from getting too
far a field.
It is right about now that you start to question if this was REALLY meant to be open to the public at all.  I mean there is no pavement, no railings, no signs of any type and not another soul around. 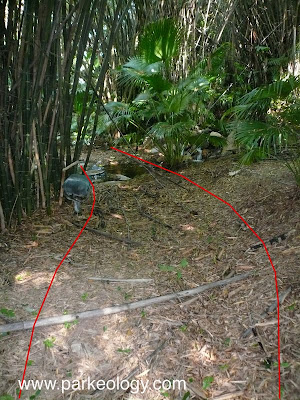 Full stream ahead! (get it… it’s a pun. I told you that the wit was unintentional)
Then you finally get that confirmation that this is in fact a designed guest zone… the “stones” crossing the streams are there for you to use. But we are also VERY close to that character greeting zone now and those walkie talkie wielding character wrangling supervisors probably don’t know that Joe Rohde says it’s OK for you to be back here. 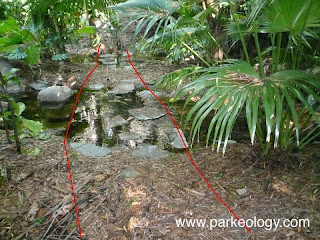 Go for it.
On the other hand if the idea was to make you feel as though you were exploring for real then these guys succeeded in spectacular fashion… you will feel a certain rush of Indy like excitement as you try to be as quiet as possible, crunching twigs and leaves underfoot, and avoiding detection. 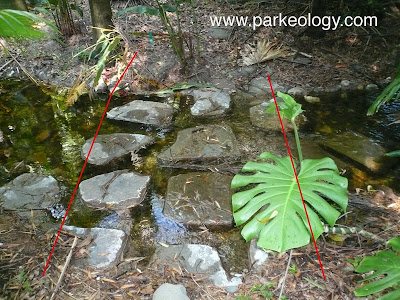 No doubt that those were made for walking on.
We are getting near the end, though you could run around even off the path… maybe pitch a tent?  Your playing by your own rules now big guy! 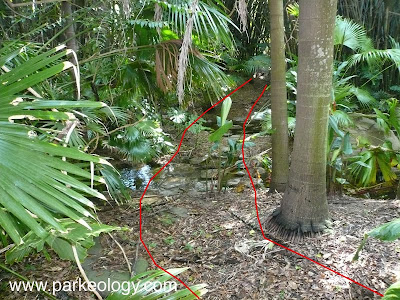 Looking back we leave the stream behind.
Now you have to make your exit… do it quickly, stumbling out of the woods and tripping over a stroller just is not that cool looking. 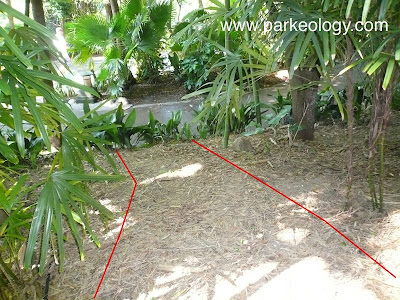 More new plants up ahead… I should of brought some weed killer
to off set these new developments.
Again, Disney has blocked our path… newly installed plants try to hide what is one of the true secrets of the resort. 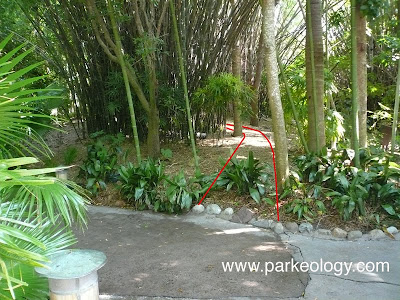 You think a stinking plant’s going to stop us?
And we are back out in the sun and on our way to Asia.  Think of this as the all time most inconvenient yet wonderful way to by-pass having to run into some characters (does anyone REALLY like those guys anyway?  come on.)
As the years pass those new plants will grow in, soon the path will be lost to time and people will doubt it ever was really there… but parkeologists around the world will continue to seek out hidden gems like this and keep them alive.  Speaking of hidden gems… this would be a PERFECT spot for this.