A cryptic world hidden right before your eyes.
A hint to a clandestine mystery right under foot.
A sprawling network of clues cloaked from many, indiscernible to most, shrouded to all but the most inquisitive and yet visible to all in plain sight.
But first, it’s time for the Family Feud! 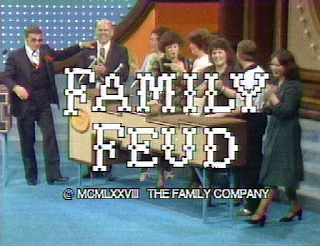 Nice shades
That’s right, the classic game show where members of opposing families go head to head trying to match the answers on surveys of the general population. 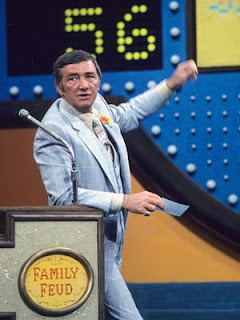 Nice suit
Richard Dawson, the original and still the best host of the show would take a break from kissing the more attractive female members of any given family to ask questions such as:
“Name something you would find in a baby’s diaper bag.”
SURVEY SAYS!
My guess would be diapers…
Or:
“Name the worst Disney structure of all time.”
SURVEY SAYS!
I’m going with giant ass hat at Disney Hollywood studios.
Or maybe:
“Name a secret world of treasure hunting going on all over Disney properties across the globe that you likely know nothing about. This hunt takes place in plain view and you are blissfully ignorant of it.”
SURVEY SAYS!
Wait, what?  Secret treasure hunt… hidden in plain site… spanning the globe?  Is this the next sequel in the National Treasure franchise? Maybe it is some expanded version of the surprisingly not sucky Kimpossible World Showcase Adventure at Epcot? 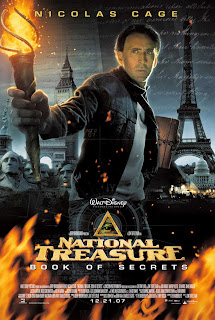 Sort of sucky
No and No. What it is is part of a very popular and yet still not that well-known (Sounds like Dane Cook or Tyler Perry) global game called geocaching.  Imagine combining a scavenger hunt, adventure travel and hidden treasure into one high tech package.  Participants arm themselves with portable GPS units, download coordinates of clues or of secret hidden treasure chests from various web sites and then set out to track down the mystery items.  Stashed at the end of the hunt could be anything from a box filled with trinkets to a written story or simply an interesting artifact of sorts to behold. 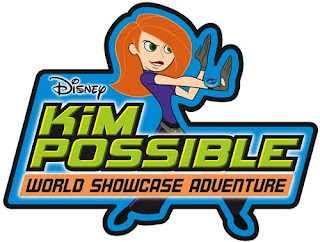 SHOCK!  Not sucky at all.
Geocachers follow a set of rules that include always replacing an item you discover with another one.  They also relish in making the hidden booty hard to locate.  In some cases the GPS coordinates may lead adventurers to the middle of a lake where they must dive down to find the cache or perhaps high on a cliff side that must be traversed to be reached. 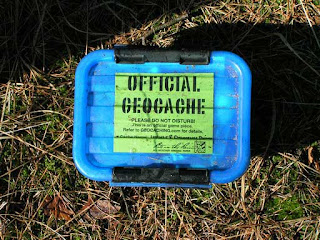 They are out there waiting for you.
The Disney properties are rife with such places to hide these geocaches.  Adventureland alone has endless possibilities and there are in fact geocaches constantly being left around Disney resorts.  Tucked into the gardens surrounding the Tree of Life, perched in a cave on Tom Sawyer’s Island or resting in a Moroccan bazaar in Epcot the possibilities are endless. Treasure seekers find some while others are whisked away by maintenance crews but they are out there… waiting to be discovered. 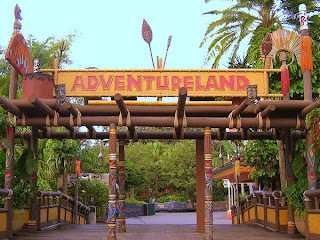 So many possibilities
Geotracking is in essence an elaborate and large game of hide and go seek.  Individuals leave clues for each other to find the geocaches they hid away.  But there is another parallel phenomenon, something that Disney themselves is involved with and something that you have likely walked right over and did not even notice it. 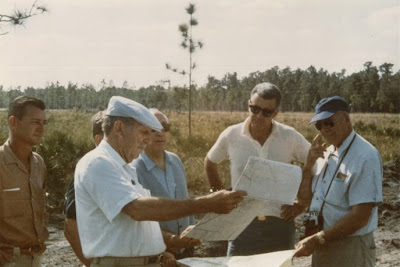 Surveyor Bill Hart, Walt, Roy, future CEO Card Walker and master planner Joe Fowler
(plus construction supervisor Joe Potter blocked by Walt) survey the situation at WDW.
Parkeologists need to keep their eyes peeled at all times, always on the lookout for secrets that may slip by the average park guest and the hidden survey markers (known as benchmarks or more scientifically as geodetic control points) strewn throughout the Disney parks and resorts are a perfect example of this. 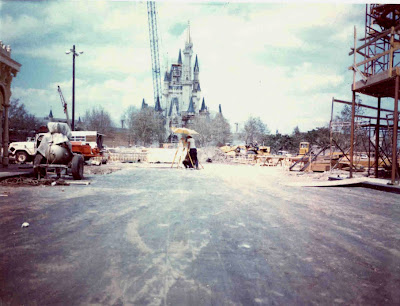 Surveyor Matt Sheridan at work circa early 1971.
Disney like any landowner uses surveys to designate the boundaries of their property and other geological statistics. These “control points” allow Disney to understand their land and plan for its development. At key points benchmarks are embedded into the ground as a permanent marker of a specific location.  The markers themselves have become the treasures for many geocachers to discover and report the location of.  For the average person they are small (several inches across), unnoticed discs in the pavement, for a geocacher an undiscovered benchmark is pure gold.  Once a survey disc is found it is photographed, the coordinates are noted and the info is uploaded to various online registries; the goal is to document every marker there is, but no one really knows how many there are hidden amongst us. Between the two U.S. Disney resorts nearly 100 permanent markers have been discovered and documented to date. 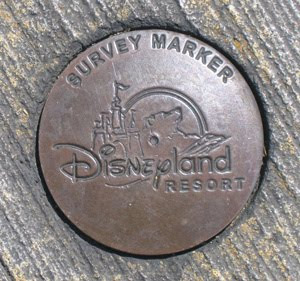 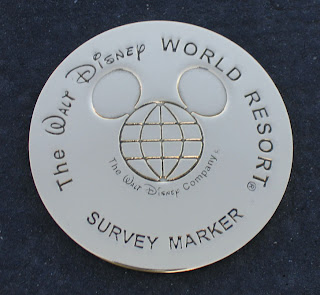 Modern Disneyland and WDW benchmarks.
The locations run the gamut from smack in front of the castle to the farthest corner of a parking lot.  Many markers get lost in time, paved over, ripped out or removed as new developments come and go.  These markers (and the many thousands of other unmarked but noted and surveyed locations) are critical for Disney to do anything from mapping underwater ferryboat landings, to determining the trajectory of lasers used in an outdoor light show to designing the route of Kilimanjaro Safaris.  In short if Disney is going to build something they need to survey the land first and the most critical of these points are marked with benchmarks. 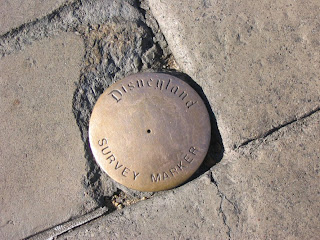 An older Disneyland style marker by Pirates.
The most amazing part of the benchmarks is how seldom people notice them.  If you have been to a Disney park then you have walked by, stepped on or at least been within view of a benchmark, have you ever noticed them?
Like the Matrix it is time to open your eyes and see the real world no longer obscured from site but now fully visible to you and available for your own treasure seeking adventures.  It is Kimpossible made real.
If a picture is worth a thousand words let me save you from reading a dozen pages more. These photos represent but a smattering of the myriad of markers out there waiting for you to discover them.  Have fun and say high to Nicholas Cage for me. 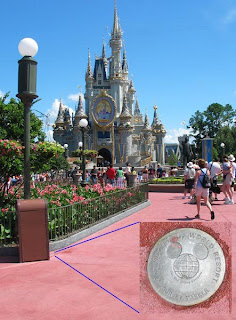 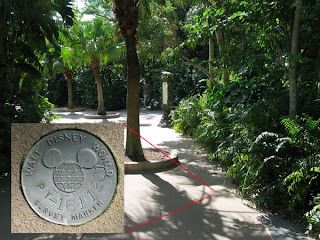 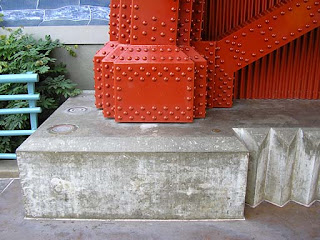 Soon to be no more at DCA 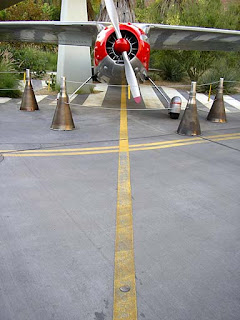 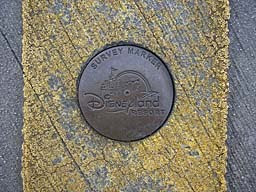 This one is cool 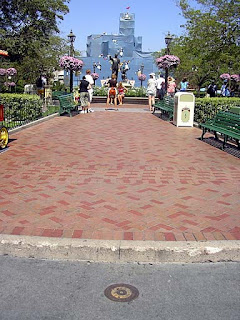 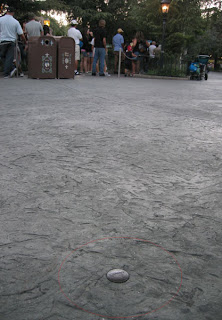 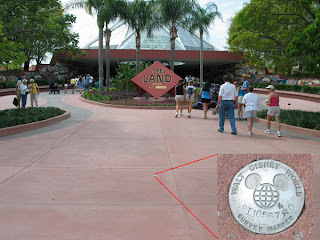 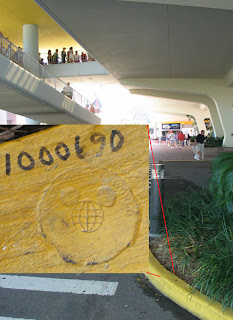 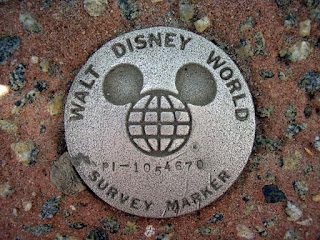 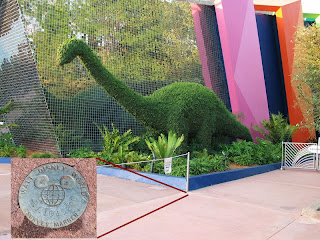 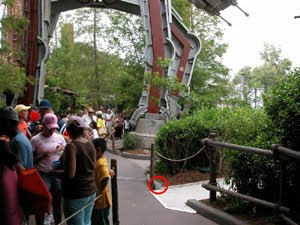 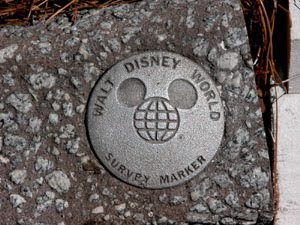 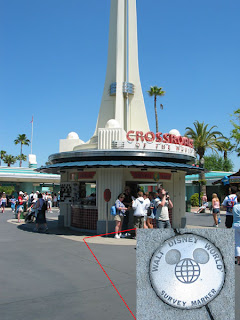 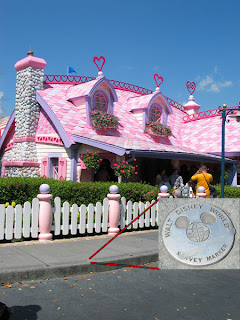 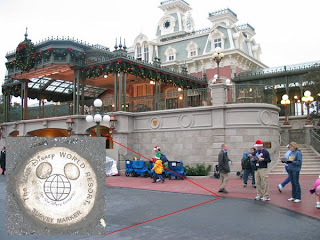 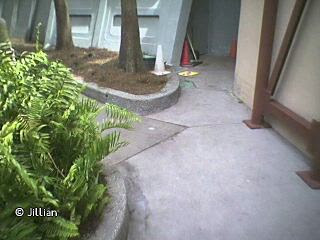 Any guesses where this one is? 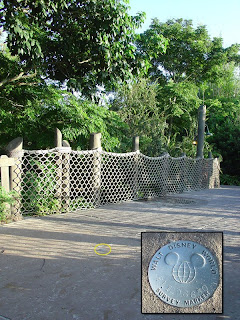 Even Typhoon Lagoon gets in on the action.