…or maybe good at it, depending on how you look at it.  Yes, we’re back in France.  Again.  At this point, it’s almost like a game, seeing how many consecutive posts about Epcot’s France Pavilion I can string together.  Don’t worry, I’m running out.

In 2009, Jim Rome did 20 consecutive shows featuring “Guys Named Rex.”  Had he visited Hollywood Studios, he could have had 21.

Speaking of Rome, how about Italy, huh?  As you may remember from high school, it’s right next to France in World Geography.  But when Imagineers assembled everyone for the World Showcase team photo, Italy and France got into an altercation, France burst into tears and nearly quit, and Morocco, Japan, and America had to step in to separate them.  To be fair, it wasn’t all France’s fault.  Italy was being a bit of a jerk.

Anyway, every year Walt Disney World issues these wonderful little pictorial souvenir books, with elaborate spreads of glitzy marketing material printed out on high-gloss paper. While flipping through the 1998 edition, I came across the entry for Illuminations: 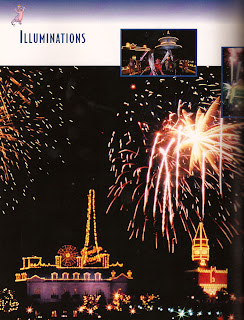 Great photo, right?  Perfectly captures the essence of Illuminations.  This is the older Illuminations, as evidenced by the Moulin Rouge sign and windmill on the France pavilion.  The artist is very skilled to have properly captured the fireworks, the twinkling street signs, and a juxtaposition of countries that has never appeared in the history of World Showcase.

Okay, so they photoshopped France in next to Italy.  What’s the big deal?  Well first off, how do you feel if you’re Germany, and suddenly France is taking up your space?  Actually, maybe that’s just giving Germany a taste of its own medicine.

And this wouldn’t be the first time some Disney marketing genius decided to go around altering reality for the sake of a good layout.  In fact, our very first parkeology post caught them in the act of rearranging Future World.  Really, these books are first and foremost marketing materials, so we can forgive a little tweaking.

But imagine my amazement when I turned back the clock to 1996.  That was the year of Disney World’s 25th anniversary, and they released a great little book called Since the World Began.  It purports to be of more substance than the souvenir books, but on page 117, they show the exact same photo from the 1998 book — but worse! 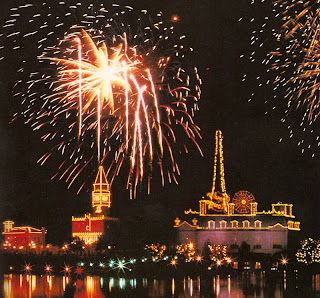 The picture above shows only 1 page of a 2 page spread.  This picture actually continues on to show America and Japan to the left of Italy.  What?!  That’s completely reversed!  Not only did they photoshop France into the wrong spot, but they flipped the picture to boot!  Even that would be almost forgivable, but unfortunately France has that Moulin Rouge sign proudly on display.  Now it’s spelled backwards.  Happy 25th birthday, Disney World!

It’s always fun to catch Disney in the act of messing with their audience, assuming that no one will notice.  Here’s a fun recent example, the new ads for Disney World’s Summer Nightastic promotion.  It starts this weekend, and looks like a ton of fun — except that pretty much every clip shown here is of Disneyland.  There’s a brief shot of Cinderella Castle, and maybe a couple others, but otherwise it’s all California.  Thanks to the great forum members at wdwmagic.com for tracking down the video.