We love our Huey Lewis references around the Parkeology offices. Anything that would confuse someone under 30 years old is cool by us.

Shane was freaking out today. First Blogger went down for an extended period of time, then James our (former) map concierge decided it was time to move on and peruse some of his other interests, something about the Royal family, fine china and philately… I don’t know. How caring for our extensive map and guidebook collection was not fulfilling enough for him is beyond me.
Anyway, back to Shane freaking out… he was right in the middle of putting together a multi-media presentation for some big wigs and he was depending on James to scour the archives and pull the appropriate guides. Now James is gone, the map room is in disarray and Shane is totally bugging out on me. This morning I found him running around the campus dressed as some sort of bizarre combination of Captain Eo, Figment and Mr. Dairy Good clamoring on about how he needs the square EPCOT map or he will never get the presentation done and the creepy mannequin will get him. When he gets this way it is best to lock off the costuming department and just let him ride it out.
But you know, I’m his friend and colleague, I guess when one parkeologist goes down another must rise to take his place and so for Shane I present you the famed square EPCOT guidebook.
This clearly is the most interesting EPCOT guide map ever and is in fact unique among all Disney guide maps. Rather than unfolding or even being a saddle stitched book this baby did so many tricks it was like the David Copperfield of the map world… shoot, there I go confusing the twenty somethings again, it was like the Criss Angel of the map world.
This was the original guide map from Epcot; available in 1982 and 1983 it was quickly replaced by a more traditional (though still lavish by today’s standards) booklet. It measured 6 inches by 6 inches and was made of stiff card stock. It unfolded vertically to reveal a map of the property on the top flap and some general info on the lower panel (more on that later).
The top map portion then flipped up again giving detailed information, descriptions and photos of each of the Future World pavilions. One more flip revealed similar information about each of the World Showcase pavilions. A final flip showed a pulled back map of WDW and had info on practical matters such as first aid and baby stations.
All very interesting and fun but it was that lower flap that really put this guy over the top. Rather than just being a flat printed piece of card stock it was a pocket that held an information wheel. You would turn the wheel on the right hand side to reveal a picture of each pavilion one by one through a bottom window. A short description of each pavilion then popped up in a separate window to the left. 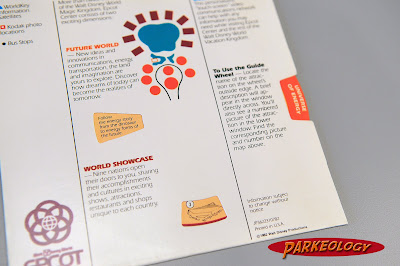 On the reverse side Kodak (the fine sponsor who paid for these elaborate creations) gave us tips on how to use the then state of the art Disc camera they were pushing hard around this time. Once again the info wheel was used but now to hard sell us on the latest and greatest Kodak gear. It is not a coincidence that Disc film (film?  More stuff to confuse the younger set) was a round disc just like the guide maps wheel. Clever marketing.
In 1982 this baby was the map of the future, here today at EPCOT Center. I can’t explain just how exciting it was to zip in and out of each pavilion through cool automatic sliding glass doors (so much more impressive than stepping on a matt and having a rickety old door swing open ala a grocery store) this was futuristic and sleek and used some sort of infra red or radar or thermo image sensing or whatever…. to a kid in the 80’s is was pure magic. The map was different, the park was different, the music was different it was all so exciting, so optimistic, so purple and so much fun!
EPCOT CENTER lost its way a bit… became simply Epcot or Epcot! Or Epcot 95 or whatever… but the core is still there and one read of this map will take you right back… it’s AWESOME.
A year or so later, and very briefly both EPCOT and the Magic Kingdom played around with simple squarish maps. Clearly the free Kodak ride was up but Disney was still smitten with the boxy style. They were more like a normal park map simply folded in half to make it squatter and more square like. They did not last long; I think parts of 1983 and 1984 (without James to verify I am ball parking… why James, why did you leave us!?!).
Those maps were simple even as compared to today’s and were downright barbaric as compared to the mystical EPCOT wheel guide maps… since then Disney has stuck to the tall slender maps that we are all very used to, albeit with far fewer pages then they once had.
If anyone has exceptional map reading, archiving and paper conservation skills and a mastery of the dewy decimal system let us know… you must also be comfortable wearing a vintage 1920’s butler uniform, monocle and pith helmet. If this is you a Parkeolgy future may be yours.
Now Shane… just calm down, only a few more days and Star Tours 2 opens and we need you in your Star Wars underoos for that… so give me the tiny dragon wings and rainbow shirt…