Disney parks are mostly full of pleasant images.  Cotton candy, singing bears, that hot belly dancer in Morocco.  But every now and then, they sneak in something unsettling.  Today, I’d like to introduce you to a creature that haunts my nightmares.

You might wonder where you can find such a beast.  Is it the Haunted Mansion?  Please.  I’ve seen scarier ghosts on Scooby Doo.  What about Tower of Terror, or the horror room in Great Movie Ride?  Spooky, but as harmless as Heffalumps.  How about the infamous Alien Encounter, so terrifying it splattered people with blood, breathed on the backs of their necks, and induced widespread panic in the Great Tomorrowland Mob of ’97?  Come on, more people were scared by Snow White’s Witch.
This creature is not something you will find in any guidebook.  It’s not based on any movie character, though you will find it at Disney’s Hollywood Studios.  I am being dead serious when I say this thing gives me the creeps.
It can be found in a window display on the Streets of America, very near to the Writer’s Stop (the shop connected to Sci-Fi Dine-in Theater, which has nothing nearly this frightening in it).  It’s a mannequin.  They’ve got it positioned with its face away from the window, so it looks sort of natural when just passing by.  To see the true horror of the thing, you have to be right next to the window, looking at it from an angle–something almost no one will do, since it gives off such an evil vibe.
Okay, you asked for it. 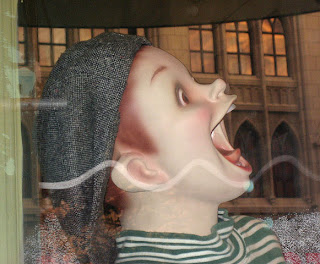 I cannot even begin to speculate why such a demonic spawn is allowed in a family park.  As I photographed this thing, I swear it blinked at me.  I think I have also seen saliva dripping from the tongue.  All I know is that I don’t ever want to come across it in the middle of the night.
Can you imagine an entire Haunted Mansion of these things?  Well, I have imagined it, and trust me when I tell you, nothing good will come of it.