I do not often expect to be confronted with the truly weird when visiting Walt Disney World. Maybe if it was the actual Museum of the Weird. But when I’m just perusing Main Street or the Art of Disney, my guard is not up. I’m still traumatized by the Kid with the Unhinged Jaw on New York Street. 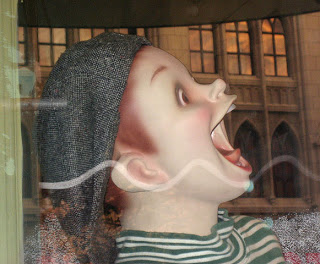 It makes no sound, but I can’t stop hearing it. Please make it stop!

Yesterday I stumbled onto another mannequin at Art of Disney, which is fast becoming an object for which a phobia needs to be invented. This one was just a torso, bedecked with a hundred decals. Instead of a head, it wore an emblem of the Walt Disney World Railroad. Instead of legs, it was mounted like some poor deformed creature onto a toy railway car. Instead of a beating heart, there was only the slow, throbbing drumbeat of the bongos of hell.

This thing looks like something out of Sid’s room. I stare at it for hours, trying to understand its haphazard pattern of railway logos. As I study it, the more logic seems to warp around me until I can no longer make sense of the world. It’s a Walt Disney World Railroad fan, by its head and railcar, but the Disneyland Railroad and Carolwood Pacific appears on its body. And the car seems to be riding half in, half out of another dimension. Why are some of its benches backwards? What mysterious tracks does it travel? What does it all mean??

I wonder if it might not be possible to bring together all these terrifying body parts to create a Frankenstein’s Monster of Mannequin horror. Screaming kid’s head. Railroad Boy’s Torso. We’d need something for the legs. Something festive, in the spirit of the Christmas season. I may have some ideas about this. 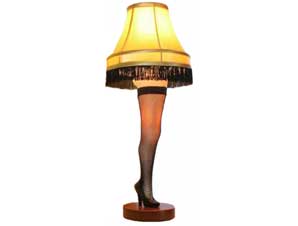