So earlier this week, my brother pointed me in the direction of a rather cool little quiz, which has nothing to do with parks and everything to do with Disney. It lists out every Disney movie every made (presumably under the Walt Disney label) and asks you how many you’ve seen.

I started strong, trailed off around the time Walt died, picked up slightly in the mid-Eisner years, and dropped off the map during the never-ending barrage of Disney Channel movies. In the words of my brother, the list can be summed up as follows:

“Wow, Disney has made a lot of good movies.”

“Wow, Disney has made a lot of bad movies.”

“Wow, Disney has made a lot of movies.”

There are over 400 in the list, and I am ashamed/proud that I have seen less than half. All those Air Bud spin-offs will kill you. It’s scientific fact. That said, my score is still better than Teevtee, who discovered the Mighty Ducks franchise early in life and refuses to watch anything else.

But when it comes to the animated movies–specifically the canonical features of Walt Disney Animation–I have seen all but one, and that one is Frozen, which opens today, so get off my back.

You know these movies, of course. Bambi and Dumbo and so forth. So many park attractions get their inspiration from these stories. Practically every single thing in Fantasyland is based off of one of these movies, including the restrooms. The lone non-branded holdout used to be the Skyway, but of course that’s gone now (replaced by said restrooms).

Recently, with the opening of the Fairytale Princess Hall of PhotoPass, much hullabaloo was made about how Disney Imagineers duplicated a set of bookends from Cinderella, which appeared on screen for about 2 seconds. This illuminates not only how richly detailed Disney’s environments can be, but also just how few marketing points there are for Fairytale Hall. Imagineers are always doing this kind of thing though. The animated features are great source material.

But it doesn’t often work in reverse. In spite of such park-inspired live action movies as Country Bears, Pirates of the Caribbean, and Eddie Murphy Must Die, the parks don’t often cross the other way into the animated movies. When it does happen, it’s usually very subtle (i.e. not starring Eddie Murphy or Johnny Depp). Here are five of my favorites. 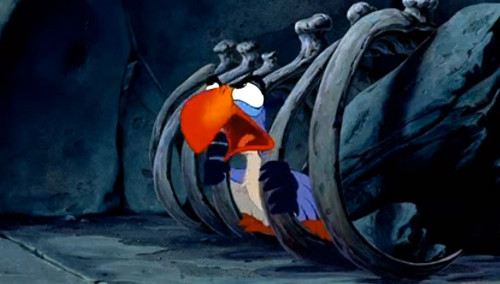 Wait a second. Isn’t the beak his largest body part? Just how effective is this cage?

Everyone remembers this joke. Scar has taken over the pride lands, Simba has been banished, and Zazu is being held captive in a ribcage cave, forced to sing for his king. He starts off with the somber “Nobody Knows the Trouble I’ve Seen.” Scar tells him to sing a different tune. Zazu manages to get the first line of the chorus to It’s a Small World before Scar bolts up in alarm and begs him for “anything but that.”

The joke works because everyone who has ever been to a Disney theme park knows just how repetitive the song can get. Scar’s line got a huge laugh in the theaters–giving everyone a chance to identify with the villain for a change. It’s a testament to Small World’s reputation that Scar can get such a big reaction for only six lines.

As Meg sings about how she won’t say she’s in love, she’s prancing about through a Greek courtyard filled with statues and fountains. The Muses are singing back up, and appear on these various structures throughout the song. During one particularly park-related moment, Meg skips past 5 busts on pedestals, one of which has broken and skewed off to the side. The Muses sing the song — just like the singing busts in the Haunted Mansion graveyard scene. 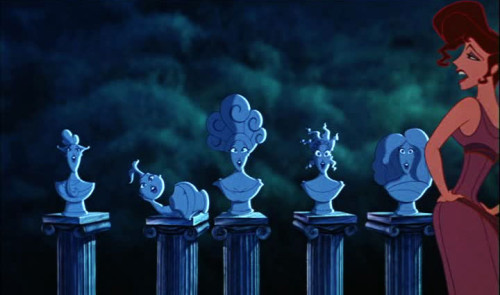 This is another fairly obvious reference that many Disney fans in the audience would have gotten immediately, but it’s just obscure enough to slip by the average theater-goer. The real selling point is the one broken bust, which nicely mimics the Haunted Mansion. Just like It’s a Small World showing up in Lion King caught people off guard, one really doesn’t expect a gothic haunted house reference in a lightweight Greek mythology story, so it gets a good laugh from those in the know.

The Gorilla and the Rifle in Tarzan

This one is so quick, if you blink you’ll miss it. After Tarzan leads Jane and Clayton to the gorillas’ sanctuary, Jane is immediately smitten with the whole lot of them. Clayton, on the other hand, is frustrated by the curious apes. While his back is turned, one of the gorillas swipes Clayton’s rife and examines it upside down and backwards. Which, if you’ve ever ridden the Jungle Cruise, is exactly what happens on that ride (the ape and the gun gag, not anything to do with Tarzan). 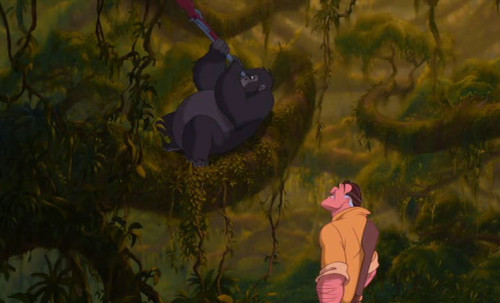 The scene where the gorillas got Clayton’s jeep to “turn over” was cut from the film.

I love this one precisely because of it’s obscurity. The singing busts of the Haunted Mansion are well recognized, and casual park fans might recollect the Jungle Cruise apes, but it’s nowhere near as iconic. The fact that the movie’s tribute is over in a second and a half makes this one really difficult to spot.

Todayland in Meet the Robinsons

When Lewis is whisked away to the future by the time machine, we’re treated to a soaring shot of the landscape, with a huge sign labeled “Todayland.” Prominent in the background are the circling Star Jets and the gleaming white spires of Space Mountain. 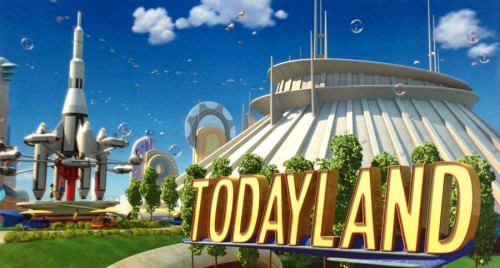 What, no Monsters Inc Laugh Floor?

This tribute is perhaps the most overtly “park-inspired” visual. Space Mountain is iconic and the focal point of the shot. But the real joke is in the use of Todayland. This gag is pulling double duty. For casual viewers, it works because this would normally be “Tomorrowland,” but since we’re in the future… well, you get the idea.

But it’s funny on another level, because to many park fans, Tomorrowland always seems to gather the reputation of being Todayland, in that they are constantly behind on updating it.

Even more interesting is the inclusion of the Star Jets. By the time Meet the Robinsons hit the theaters, the Star Jets had been long gone from the state-side parks, replaced by the Astro Orbitors, which have a similar mechanism but an entirely different design. So apparently, in the future, Tomorrowland will become Todayland, but will include rides from Yesterland. So there’s that.

As an Honorable Mention, There’s a Great Big Beautiful Tomorrow (theme song to the Carousel of Progress) also gets some airtime in this movie. With all the references to Tomorrowland in Meet the Robinsons, it makes you wonder just how Brad Bird’s upcoming Tomorrowland movie is going to top it.

At last we come to my favorite tribute. This one occurs in Aladdin, right at the end of the film, after Aladdin frees the genie (spoiler alert!) The genie morphs into some tourist garb, including sandals, a Hawaiian shirt, and a silly animal hat bearing more than a passing resemblance to a certain Disney dog. He then gathers the cast together for a group hug before dashing off to enjoy his freedom. 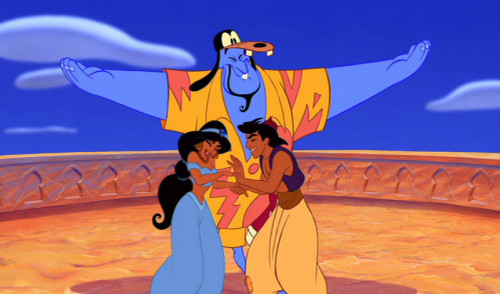 The genie is no stranger to theme park references. Earlier in the film, he had instructed Aladdin to keep his “hands and arms inside the carpet.” For the life of me, I don’t understand why this audio snippet doesn’t play during the Magic Carpets loading procedure in Adventureland.

And just before the big climax, while trying to cheer up Aladdin for successfully fooling Jasmine, the genie says “You’ve just won the heart of the princess. What are you going to do next?” The first few notes of When You Wish Upon a Star drift out from the soundtrack, making it a nice parody of the famous Disney World Super Bowl commercials.

And here he is at the end of the movie wearing one of those Goofy hats from the theme parks. It’s a small reference, right? A throwaway gag. The genie’s acting like a tourist, so it’s a funny part of the costume. At first glance, the other references are better.

But here’s why it’s awesome. 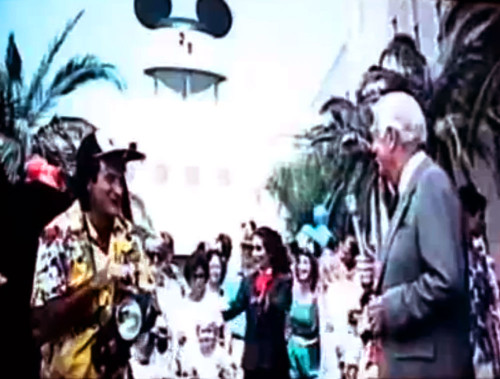 That poor frame grab is a picture of Robin Williams and Walter Cronkite. It’s from a show that used to play at the Magic of Disney Animation when the Disney MGM Studios first opened in 1989. It was called Back to Neverland, and the premise is that Walter Cronkite is out doing a man-on-the-street interview when he comes across an exuberant tourist (Robin Williams) in a Goofy hat and Hawaiian shirt. Walter offers to transform Robin into a cartoon character, to help show the process of Disney Animation, and thus was born one of the true delights of the Studio park’s early years. The Back to Neverland film is easily one of the best examples of that kind of film-based attraction.

Robin Williams, of course, is the voice of the genie in Aladdin, which was release 3 years after the Disney MGM Studios opened. And here he is riffing on the exact same costume and conceit: Himself as a cartoon character. This is made all the more obscure now for younger viewers, because Goofy hats are still around, but Back to Neverland has disappeared completely (except on youtube). And if you want your mind blown again, remember that in the theme park show, Robin was injected into the Peter Pan story (as a Lost Boy), which had nothing to do with Aladdin. A couple years later, Robin would star in Spielberg’s Hook — as Peter Pan. My, what a twisted web of intrigue.