Audio Animatronics have evolved a lot since their debut as multicultural stereotypes.  Jose, Michael, Pierre, and Fritz were pretty darn cool.  They could move.  They could talk.  They could do both at the same time (something Al Gore never learned).  But even Isaac Asimov couldn’t imagine what they’d do next.
We’re a highly scientific bunch here at parkeology, and I took a highly scientific poll involving myself, my cat, my framed autographed picture of Teevtee, and that Jehovah’s Witness that came to my door.  Here in no particular order are the 10 Coolest Things Audio Animatronics have done over the years.
1.  Climb Steps
Benjamin Franklin became the first Audio Animatronic to actually walk when he mounted the steps to Thomas Jefferson’s loft in the American Adventure, circa 1982.  Up to this point, animatronics were usually locked in place, or riding some kind of primitive conveyance mechanism.  Ben Franklin now joins Neil Armstrong as one of the few Americans who have taken iconic first steps.
2. Pick up something (and put it back)
I guess robots have picked up stuff before.  The Bird and the Robot show at the original Universe of Energy used to demonstrate an industrial robot picking up various props.  But Mr. Potato Head, in the queue for Toy Story Midway Mania, actually removes his own ear and puts it back, as easy as you please.  My uncle used to grab my nose when I was a kid, and it wasn’t nearly this believable.
3. Trick people into thinking they’re real
This honor goes to none other than Mr. Lincoln himself.  The tiki birds may have been the first AA figures, but Lincoln was a revelation.  Here was a machine that to 1960s audiences was indistinguishable from the real thing (or at least indistinguishable from Hal Holbrook).
Disney didn’t ask too much of Lincoln’s performance.  Stand up, lip synch, sit back down (predating Milli Vanilli by 20 years).  And much like Milli Vanilli, audiences swore he was a real, living human being.  Heck, Hall of Presidents still fools people today, even though most of us know deep down inside that there can’t really be two President Obamas.
4. Knock Your Head Off
Okay, so he’s been broken for a couple of years now, but when the Yeti first appeared, he was not only one of the biggest AA figures ever, he was also the fastest. Dangling over the Expedition Everest track, mouth open in a ferocious snarl, paw extended, he was perhaps the most frightening animatronic ever to come out of Imagineering (Susan B. Anthony excepted).
What made him so darn cool was how fast his arm moved.  He could probably pitch for the Rangers (certainly for the Diamondbacks).  He generated so much force, he actually cracked the foundation on which he’s mounted, leading to perpetual B-Mode and innumerable disco-oriented insults.  Rumors have cropped up recently that the Yeti is on his way to recovery.  We look forward to the day he’s back menacing Brazilian tour groups with his laser rocket arm.
5. Mimic human movement
We already mentioned Lincoln, so what gives?  Compliance technology, that’s what.  Lincoln, for all his many strong points, moved like an octogenarian on a skateboard.  He knew where he wanted to go, but he went very carefully and very precisely.  It took the Wicked Witch of the West to finally move like a real person, with our flexible joints and variable speeds.
The Witch was the first of the so-called A-100s, which made her the standout figure of the Disney MGM Studios.  It also virtually guarantees that there will be an A-1000, which is believed to be some sort of mimetic poly-alloy that will hunt your children to extinction.
6. Twirl a lariat
Yeah, American Adventure (AA) gets two Audio-Animatronics(AA) on the list!  The Will Rogers figure shows up only for a few minutes, but in that short time, he does something none of his brethren are able to do.  He twirls a lasso.
Okay, maybe it doesn’t seem like anything all that special.  But it’s still pretty cool that they got a robot to do this.  Especially when their previous attempt looks like this: 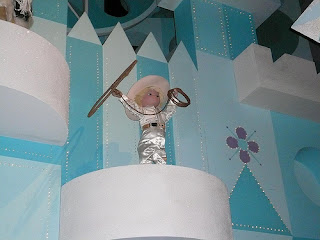 7. Walk around the park
I mean literally out in the park, on the streets, interacting with guests.  American audiences may have forgotten about Lucky the Dinosaur, but he’s still alive and well in Hong Kong Disneyland (after brief appearances at California Adventure and Animal Kingdom).
He walks on two legs pulling a cart, obeys commands from his master, and is intelligent enough to play a few basic games.  He was followed a couple years later by the Muppet Mobile Labs, which were just as fun (and just as quickly shipped overseas).  About the only thing Lucky doesn’t do is fart.  Universal’s Triceratops Encounter had already nabbed that honor (Lucky is lucky).
8.  Hop beside you
I don’t know what it is about the Brer Rabbit figure in Magic Kingdom’s Splash Mountain, but I am endlessly fascinated by his ability to hop alongside your log for a short distance.  The hidden support bar isn’t even that well hidden.  I guess I just like that the Imagineers even attempted this.
You can tell it’s complicated, because half the time the effect doesn’t even work.  You’ll just see some rabbit ears hiding behind the hedge.  But any time I can ride Splash with a working hopping bunny, it makes my day.
9. Fight each other
The Pirates of the Caribbean stateside are cool in and of themselves, but in Paris, they actually get to do a bit of stunt choreography.  During the big battle scene with the ships and the cannons and whatnot, we can catch a glimpse of two figures engaged in swordplay on the fortress wall.
The programming is such that the swords are not supposed to actually touch (though there have been stories of the AAs accidentally hacking each other to pieces).  I’ve never had the honor of seeing this fight in person, but it’s hard to imagine anything better than sword-fighting robotic pirates.
10.  Grow leg hair
This has literally nothing to do with the “animatronic” aspect of the figures, but I include it here because of the power of details.  This is truly where the magic happens, that transports people out of the everyday and convinces them that these “actors” are real.
Everybody notices it.  And for an instant, you accept it completely.  It seems like the most natural thing in the world.  If a pirate dangles his bare leg over a bridge above your boat, it’s gonna be hairy.  It’s one of the many details that makes Pirates of the Caribbean so awesome.  Now if we could just get the redhead to shave her pits…
Honorable Mention:
Mark Twain (smoking)
Stitch (spitting)
Hopper (68 Motion Functions)
Angler Fish (Kuka robo arm)
Ariel (animated hair – coming soon)
Photo Attribution:
Small World Cowboy (mrkathika)
Will Rogers (dawnzy58)