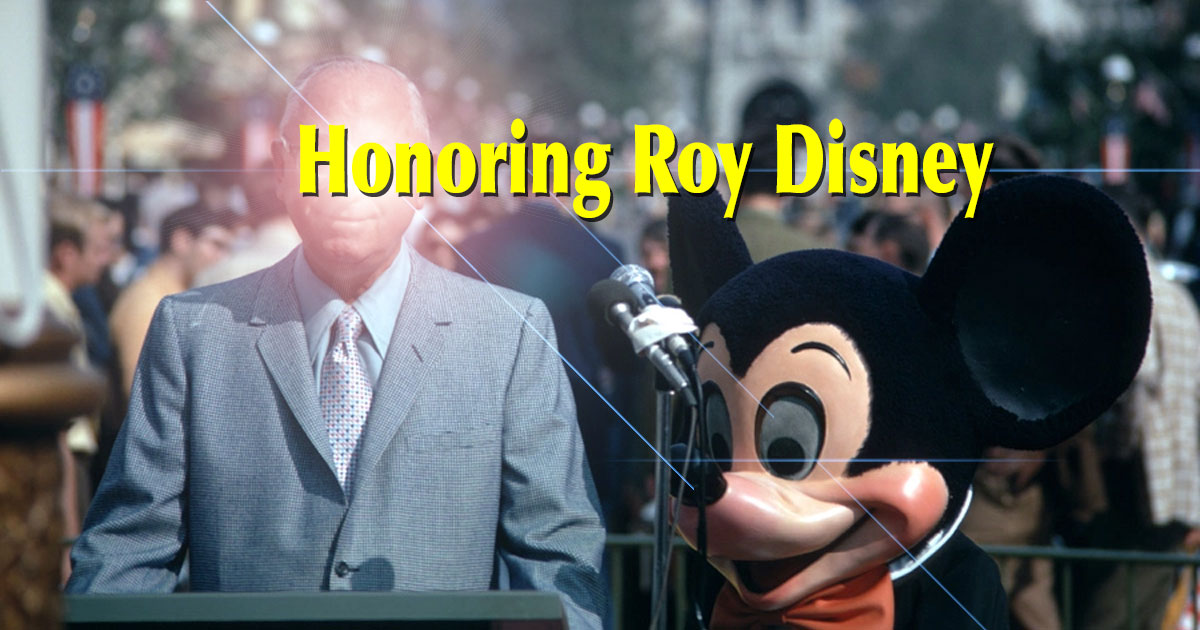 Roy Disney, co-founder of the Walt Disney Company with his brother, is set to receive his own “One Man’s Dream” tribute exhibit at Disney’s Hollywood Studios, according to a source.

Most visitors to Hollywood Studios are already familiar with the existing One Man’s Dream attraction, which draws on the vast treasures of the Disney archives to present a comprehensive overview of the life of Walt Disney, from his humble beginnings as a cartoonist to a titan of the entertainment industry and a visionary in the world of theme parks.

The new proposed attraction will highlight Roy Disney’s important contributions to the company, especially in the areas of finance and bookkeeping.

Tentatively titled “One Man’s Grounded Reality,” the new exhibit has once again delved deep into the Disney archives to deliver a never-before-seen glimpse into Roy Disney’s past.

Much like in One Man’s Dream, the first room of exhibits will focus on Roy Disney’s childhood. As the third of five Disney siblings, Roy was the very definition of a middle child. As such, he was often overlooked.

Finances were always tight for the Disney family and fresh fruit was scarce. But the scrappy Roy made a name for himself, always rising above his station to grab the coveted second banana.

Young Roy Disney was also a budding musician. He played Second Fiddle in the high school orchestra back in Kansas City.

On the brink of World War I, Roy Disney left home to join the Navy.

Naval aviation was still in its infancy, but recent documents unearthed by the Disney archives suggests that Roy may have had a hand in building it up. Navy buddies refer to him as the “ultimate wingman,” perhaps attesting to his skills as a pilot, though the exact origins of the phrase are unknown.

It was also during this time that Roy took a more active interest in religious studies. The new theme park exhibit will prominently display the family bible, opened to what is evidently Roy’s favorite passage, judging by the vigorous underlining of the text. It is the story of Jacob and Esau from Genesis 27, in which the younger brother steals the older brother’s birthright.

Birth of the Disney Studios

Roy Disney would later move to California, teaming up with his brother Walt to form the Disney Brothers Studios. The name was later shortened to the Disney Studios, or simply the Walt Disney Company.

Exhibits in this section of the attraction are more stark in nature, reflecting Roy’s budding enthusiasm for fiscal responsibility and his spendthrift business philosophy.

Just as in One Man’s Dream, Roy Disney’s executive office has been perfectly preserved and recreated for viewers exactly as it appeared in Roy’s day. Guests can imagine the young Roy working feverishly with his adding machines and ledger sheets.

As the company grew, Roy often shunned the public spotlight, preferring instead to focus on more solitary pursuits like his martial arts training. According to his sensei, Roy’s signature move was the “sidekick.”

He was also able to shed his “always a bridemaid” reputation when he wed Edna Francis in April 1925. Bucking tradition, Roy served as his own best man.

When his brother passed away, Roy Disney assumed full control of the entertainment empire. The company was then in the very early stages of the so-called “Disney World” project. Roy vowed to see it finished.

With single-minded purpose, Roy spearheaded the most massive construction project in the United States. He marshaled the creative forces of thousands of Imagineers, craftsmen, and artists. He built hotel businesses and transportation ecosystems from the ground up. A 43-square-mile resort mecca emerged from the swamp lands of Central Florida. It quickly became the largest employer in the entire state. True to Roy’s nature, the resort was built debt-free. For the first time in its nearly 50-year-history, the company was finally on unshakeable financial footing.

As a reward for this stunning achievement, the company renamed the property “Walt Disney World” and later built an attraction at Hollywood Studios honoring Walt’s contribution.

The Imagineering concept model for the One Man’s Dream attraction will be prominently displayed in the last room of the Roy Disney attraction.

Though not yet officially announced, Hollywood Studios is expected to roll out similar tribute exhibits in the coming years honoring all of the company’s past CEOs.

These include One Man’s Son-in-Law (Ron Miller), One Man’s Forehead (Michael Eisner), One Man’s Shopping Spree (Bob Iger), and One or Maybe Two Men We’re Not Really Sure and No One Remembers (Card Walker and Donn Tatum).