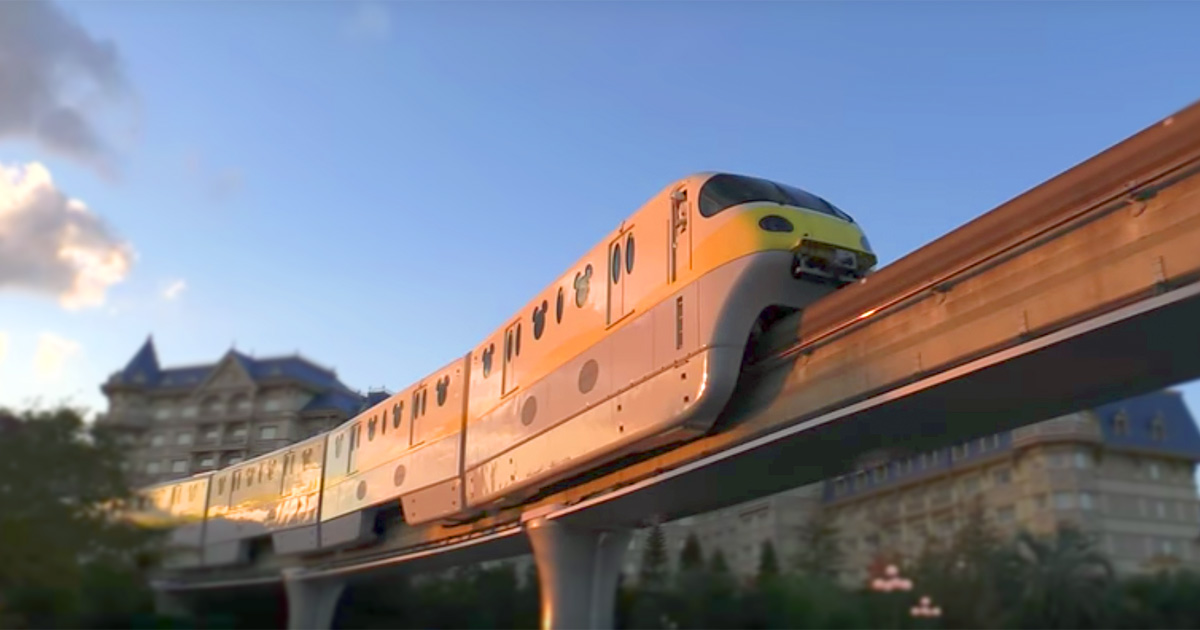 Walt Disney World has soured on the monorail. Futuristic sky trains are out. Glorified ski-lifts are in. Yet halfway around the world, a utopian future marches on, personified by the Tokyo Disney monorail.

We had the pleasure of riding the Tokyo Disney monorail several times during our stay at the resort last year. Yes, I said pleasure.

That’s because in the States, the monorail coolness score gets dinged by all sorts of aggravating and annoying features.

But in Tokyo, things just work.

1. Monorail vs. Ferryboat: The Transportation Version of Russian Roulette

The story goes that a donkey — near death from equal parts thirst and hunger — finds itself at a crossroads. To the right lies a pile of freshly cut hay. To the left, a cool trough of water. Unfortunately, the donkey is exactly equidistant between the two. Unable to determine its greater need, it dies of privation.

This paradox is known as Buridan’s Ass, and it plays out every morning at the Transportation and Ticket Center.

Visitors are desperate to reach the Magic Kingdom. On their left is the Ferryboat dock, with shorter lines but longer cycles. On the right is the Monorail, with long lines but more trains.

No matter which one you pick, it always looks like the other one is faster.

Most give up and die at the Joffey’s Coffee stand.

Like every subway system on the planet, the Tokyo Disney Resort Line has a countdown clock in the station giving away government secrets like “4 Minutes Until Next Train.”

Time schedules have been a thing ever since Victorians invented the Iron Horse. It’s simple math. Distance x Speed = Duration. But for some reason, Walt Disney World wants to treat this algorithm like it’s the secret formula for Coca-Cola.

Imagine having this insider information when deciding between monorail or ferryboat. It makes you feel more in control, and you won’t be stuck gazing down an empty concrete beamway wondering if your monorail got caught in a snow drift back in Colorado.

2. Idiots That Refuse to “Move All the Way Down”

Monorails are like Oreos. People always go straight for the middle.

Cast Members are on endless repeat like so much white noise, telling people to please move all the way to the end of the platform, where there’s plenty of room.

Guests listen about as often as you do when your dentist tells you to floss more.

The worst part is, some of us know the Cast Members are telling the truth. But there’s no getting around all these idiots. Not without a battering ram.

At Tokyo Disney monorail stations, the platform is wide and welcoming. You could set up several ComicCon booths on the platform, with room left over for a few breakdancing mats.

There is no danger of everyone clogging the same three cars in the middle of the train. You can stroll around the station until you find the perfect gate that fits your mood and personality. And because of the aforementioned handy clock, you can actually just hang back on the benches until you’re ready, without worrying about a monorail suddenly appearing out of nowhere.

As I mentioned before, if you park in Magic Kingdom parking lot, you have two options. Monorail and Ferryboat.

If the line is unbearably long — such as when leaving the Magic Kingdom after New Year’s Eve Fireworks — you have no alternative but to wait in the line.

It seems counter-intuitive to say that the Tokyo Disney Resort Line is better because it costs money. But paying per ride likely reduces some of the demand. Anyway, it’s much cheaper than the $40 Walt Disney World gouges for preferred parking. There are even discounts when purchasing seasonal, daily, or length-of-stay passes.

Best of all, guests at Tokyo Disney are under no obligation to take the monorail. If they want to walk, they can get there for free.

It’s sad that Disney’s Walkway Around the World never bridged that little canal that exists between the Grand Floridian and the Magic Kingdom. A few feet of water is all the prevents someone from being able to walk from the Transportation and Ticket Center to the Magic Kingdom front gate.

Granted, that would be a very long hike. But here’s the truth: On New Year’s Eve, I’d prefer the walk. I hate being trapped at the mercy of 200-passenger trains that can’t seem to tell me when the next one is coming — if at all.

A Walt Disney World monorail cabin consists of two sections, each containing benches on the left and right, with standing area in the middle. At either end of the car is a slanted wall behind the benches, presumably housing mechanical components like a non-functioning air conditioner.

It used to be even more cramped. Not too long ago, the standing areas themselves had a short half-wall barrier jammed in the middle, taking up valuable space. Thankfully, those have been removed.

Once again, the Tokyo Disney monorail really shines. The seats are oriented along the outer walls, leaving the entire length of the car available for standing.

Gone are the awkward handrail poles — which themselves take up additional standing room at Disney World. In their place are hand straps similar to what you see on Disney World buses — only these have a decorative Mickey twist.

The Tokyo Disney monorail cars are so roomy, they have space for little display cabinets in the corners, often hawking the latest in Duffy the Disney Bear merchandise.

And if that’s not enough, there are accordion passageways between the cars. If you find that you accidentally jammed into a cabin with a Brazillian tour group, there’s nothing stopping you from changing cars mid-trip.

Stroller complaints are rampant among crotchety Disney fans, but I understand perfectly well the value of a stroller to parents. Kids get cranky when they’re tired, and Disney World can be confusing enough without also having to keep track of roaming four-year-olds. And I would never suggest that parents need to “wait until the kid is old enough” before they visit.

But I also think it’s obvious that the Disney World monorail has no solution for these giant space-taker-uppers. Parents are left to fend for themselves, seizing upon whatever free space they can find for their stroller like the world’s worst game of Tetris.

The Tokyo Disney Monorail Solution: Promote a Culture of Walking

Take a look at the line below. This is rope drop at Tokyo Disneyland. It looks every bit as popular as one of the U.S. parks.

When I first saw this, something seemed different. I couldn’t put my finger on it. Then it finally hit me.

Once you spot this difference, it is impossible not to see it everywhere at Tokyo Disney. Everyone — all but the very youngest children — will walk. And yes, this includes the Tokyo Disney Resort Line, where the lack of strollers frees up room for extra passengers.

This is just part of the Japanese culture. Schoolchildren in Tokyo — we’re talking five or six years of age — walk unaccompanied by adults to their schools. Imagine sending your kids off like that. But in Tokyo, the crime rate is exceedingly low. This respect for others is one of the things that I love most about Japan.

In Tokyo Disneyland or Tokyo DisneySea, you’ll see these same kids wandering around the parks with their parents — often carrying a backback of stuff in addition to massive collectible popcorn buckets.

Here, we’re lucky if we can keep teenagers out of the strollers. And most kids certainly won’t be carrying anything other than their favorite handheld device.

Maybe there’s a way to positively incentivize parents into not bringing strollers. How about a small discount off a child’s ticket if he or she doesn’t bring his own stroller? A parent bringing the stroller “just in case” may decide that saving a few bucks is better.

We all know what the monorails at Walt Disney World look like after a full day on the loop. Trash everywhere. Windows smeared from thousands of kids pressing against the glass. Spilled soda and other dubious stains.

We’ve come to accept it.

Here’s a little story about the Tokyo attention to detail.

As you might expect, the Cast Members will rotate through positions during the course of their shift. Oftentimes this means they will transfer from one station to the next by actually riding the monorail.

A CM got on the train with us and he had a little shoulder bag. We did not think anything of it until the train started moving. Then the CM casually took a white towel out of his bag and began polishing the chrome handrails. He moved on to the Duffy display cases, the individual Mickey handgrips, and the Mickey-shaped glass windows as we were in transit.

It was a beautiful example of efficiency. And it helps keep the trains spotless. Had he stopped right there, I would have come away extremely impressed.

But as I observed this marvelous behavior, the young man finished with the windows. He then moved to the accordion-style passage between the cars, proceeded to take out a different style rag, and began dusting the individual slats in the rubber accordion covering.

That is first class service.

What Did We Miss?

Last year, when we visited, the Tokyo Disney monorail stations had kiosks set up where guests could write their own wish in celebration of the Tanabata festival. These cards featured the shape of the signature Mickey hand-rings in the monorail.

Of course, we felt obliged to leave our own wish behind. Here was what my son wrote, spelling mistakes and all.