In the classic EPCOT Center attraction, the World of Motion, they based an entire show scene around the idea of the World’s First Traffic Jam, complete with animatronic chickens.

But Disney World’s First (and Worst) Traffic Jam happens every night at the Magic Kingdom. I don’t spend a lot of time musing about the future here (too many old haunts to visit), but I do find it interesting that Disney has finally turned its eye towards the colossal log jam that develops seemingly every single night at the Magic Kingdom. It’s like they’ve suddenly come awake to the problem, after 40 years.

As a local, I will tell you that Magic Kingdom is by far the most involved park to visit — and you know why. The parking lot is a mile away from the park itself. Going to the Magic Kingdom requires an investment in time just to get through the gate. And if you want to go home after the fireworks (i.e. when everyone else wants to go home), it requires even greater stamina.

It’s well known that Walt want the park situated as far from the everyday as possible. The monorail and the ferryboats represent a decompression chamber. As you sail over the Seven Seas Lagoon or glide in through the Contemporary atrium, the real world melts away, replaced by a fantasy land of make believe. It’s all well and good until the kids are tired, your feet are shot, and sixty thousand strong are streaming towards the monorail station.

It seems like in the span of a few months, they have embarked on major efforts to fix this.

First we have the Main Street Back Alley coming to life over behind the Plaza Restaurant. They’ve always used this backstage area as an alternate route through Main Street during heavy crowds, but now they have plans to theme it, which I am all for. It’s interesting to think of Main Street gaining another corridor, and it should be fun to see what they come up with. Anyone who has ever been stuck on Main Street during Wishes will welcome this new path.

Not only that, but the entire Hub is being expanded — hence the recent draining of the moat. I’ve heard grumblings about the loss of green spaces, but I really think Disney has absolutely no choice in this. Either cancel the fireworks, or create a bigger viewing area. Pick your poison. All it’s going to take is for some nutjob to shout “bomb!” during the nightly performance, and there will be a mass panic with lots of injuries due to the body-to-body crowds. And on peak nights (Fourth of July, New Years), you literally cannot move. It’s horrible.

Those efforts help with traffic inside the Magic Kingdom, but they’re doing things outside as well. When I arrived at the TTC earlier this week, Wishes was just about to kick off — meaning the Monorail system was about to get put under heavy load. They actually routed those of us coming into the park onto the Resort Line. It was frustrating for me, because now I had to wait for it to stop at Poly and Grand Floridian on my way in, but I’m sure the reason was to allow faster turnaround of the Express Monorail.

And finally, there is a new Ferryboat dock under construction, both at MK and at the TTC. 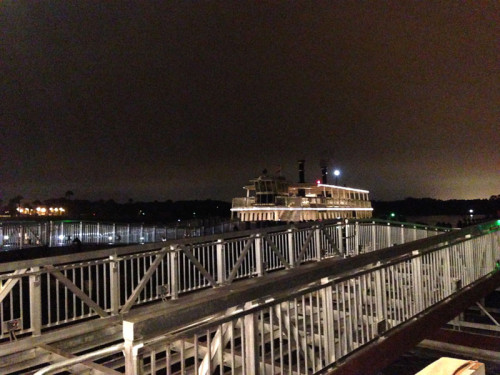 The new dock, still under construction at Magic Kingdom. The ferry in the distance is docking at the original dock.

Ferries are really their best way to add capacity. You can’t add another monorail track without a lot of expense, but you could conceivably add more ferries without much more cost than just the boat itself.

It did get me to thinking about other ways in which to solve some of their problems. I don’t have much of an answer for the monorail/ferry overload. For years I’ve wished for a bridge and sidewalk over that small canal at the end of the Walkway Around the World (the one which houses the Electrical Water Pageant during the day). This would allow me to walk to the Grand Floridian, and from there continue on to the Polynesian and the TTC. It’s a ridiculously long walk, I know, but on the bad nights I wish I had the option. I hate waiting in interminable lines.

For the Fireworks problem, I’d like to see them expand the show a bit. They’ve made the Castle the centerpoint for years, but why can’t they have multiple unique viewing spots? Some fireworks that are centered around Space Mountain or Big Thunder or the Riverboat? That would disperse crowds throughout the performance, freeing up some of the logjam on Main Street. When I was at Disneyland a couple years ago, the Christmas fireworks had fake snow, with several snow points at different spots in the park. We ended up at Small World, and it was much more relaxing and the fireworks were just as good.

Anybody else have some ideas for how to improve the bottlenecks? Maybe we need a third transportation mechanism at the Seven Seas Lagoon. Ziplines over the water? An underwater tunnel? End-of-the-day Monorail FastPass? Maybe we can crowdsource a solution to make life easier. With all the changes happening to Magic Kingdom these days, a better exit strategy would be among the most welcome.