At the box office, Spiderman and Batman got beat up by second tier superheroes like Iron Man and Thor.

George Lucas managed to rekindle the excitement for millions of fans across the globe. And also released Red Tails (remember that? Yay, Disney gets it!)

And Disney Feature Animation and Pixar decided to dress as each other for Halloween.

Back in the summer, Pixar released its first real “Disney” movie: A princess story involving a magical transformation, female empowerment, and jaw-dropping fairy tale visuals. The only things missing were a wise-cracking monkey and Alan Menken.

On Friday, Disney Feature Animation will release its first real “Pixar” movie, about a tall, lunkish character who gets fed up with being the bad guy in his own life story and tries switching careers. 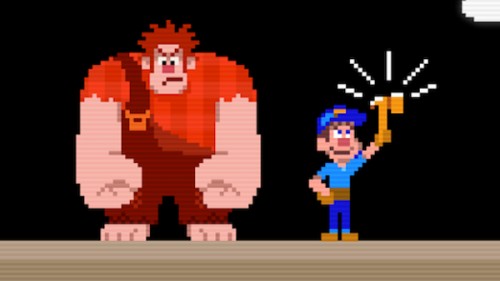 Brave did decent, but not “Pixar Juggernaut” box office. Meanwhile, I’m predicting Wreck-It Ralph turns out to be the biggest Feature Animation hit in almost 20 years ago. It has all the elements of the best Pixar films: A unique world. A touch of childhood nostalgia. Geek street cred. Strong voice casting. And that killer, killer idea that makes audiences want to see it, such as pairing a multi-Oscar winner with the star of Jungle 2 Jungle.

There’s a buzz around Wreck-It Ralph that was never there for Princess and the Frog (a return to hand-drawn animation!), Bolt (Miley Cyrus is — or possibly has — a dog!), or Meet the Robinsons (something vaguely goofy that kind of has to do with time travel and a genius family but it’s hard to talk about oh just go see it!). One has to go all the way back to the heady days of the early 90s, when Little Mermaid, Beauty and the Beast, Aladdin, and Lion King reacquainted audiences with the magic of Disney animation. Oh, and Rescuers Down Under. Mustn’t forget that.

Like any cyclical business, it was feast or famine. After the Katzenberg glory years, Disney started putting out things like Brother Bear, Home on the Range, and Chicken Little. All of which went on to become some of the most timeless classics ever watched by Roseanne Barr. That allowed Pixar to step in and steal the animation crown, along with Dreamworks, which somehow is well respected in spite of releasing both Shark Tale and Bee Movie.  It somehow seems wrong that after 80 years of making animated features, Disney Feature Animation owns only 5 of the top 40 highest grossing animated hits, and one of those is a live action movie starring Bob Hoskins. Only Lion King is in the top 10.

If Wreck-It Ralph can deliver the goods story-wise (and from everything I’m hearing, it does), then it’s a good indication that Disney Animation might be all the way back. Tangled was a very strong effort a couple of years ago, but Ralph has “breakthrough” stamped all over it. It’s the sort of movie Pixar used to make, before they got distracted with movies that were either all about marketing (Cars 2), or impossible to market (Brave). Those movies still did well at the box office, but not up the standards Pixar had set for itself.

If Ralph does blow people away, it opens up a whole new franchise of opportunities for the theme parks. Imagineering already has Marvel stuff ready to go. You just know they’re going to do the same with Star Wars (and of course Howard the Duck). But the world of video games may be the most untapped intellectual property in the theme park universe. And no, Toy Story Mania does not count.

For the first time in history, virtually the entire relevant theme park demographic has grown up with video games. There are still a few older park goers who didn’t, but families and their kids have never known a life without Mario and the rest. I’ve been saying for years that Legoland should have been licensing video game characters for their rides, to define themselves as the true “Toy Land” in the theme park lineup. Now Disney has a chance to do it for real.

Wreck-It Ralph is starting to make the usual “new release” appearances in theme parks. The merchandise is on the shelves. The “making of” displays are up in the Magic of Disney Animation. The character greeting area opened on Sunday. The first “inappropriate touching” lawsuits were filed on Monday. 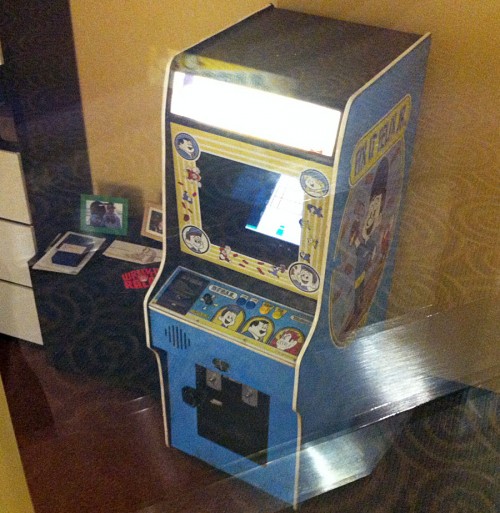 But there are signs that this could turn out to be more than just another Up or Wall-E. Those movies came and went with the same character meet-and-greets and art displays. Once the movie disappeared from theaters, so did all the park stuff. You might find an occasional Wall-E for sale at Mission Space, or Dug photo op, but there’s no real demand. Ralph can change all that.

I haven’t seen it myself, but apparently there are rows and rows of “Fix-It Felix” game cabinets dominating one floor of DisneyQuest. If any attraction could use some rejuvenation, it’s DQ. Can you imagine it re-themed as a true “Video Game Park,” with Ralph as its host? Imagine it stripped of its current disjointed levels, replaced with familiar themed environments from Mario Brothers and Zelda and Halo and Skyrim. Get rid of old polygon attractions like Virtual Jungle Cruise, or wildly irrelevant Mighty Duck pinball activities, and replace them with supercharged video game experiences. Why not a FPS (First Person Shooter) Lazer Tag arena themed to the classics of the genre? How about a Mario Kart (or Sugar Rush) go-kart track? Maybe even a life-sized, human-catapult Angry Birds experience?

I know I’ll be in line this weekend for Wreck-It Ralph, and I’m sure many of you will as well. With Carsland, Fantasyland, Lucasfilm, and the Avengers, Disney is already having an incredible year. I think Wreck-It Ralph may turn out to be the icing on the cake.