Today I’d like you to meet the only animatronics in Toontown.  These lovely ladies may not look like much, but when it comes to three-dimensional moving figures, they’re all you’re gonna get.  Everything else is either a statue, a painting, or some college kid in a foam rubber suit.

These gals aren’t that hard to find.  If you ride Toontown’s only ride, you walk right by them in line.  In fact, if you actually keep your eyes open while riding Barnstormer (yes, for all 60 seconds of ride time), you may spot them come to life.  For the most part, these chicks are sedate little hens.  It’s only when some dippy dawg in his serpentine plane comes crashing through their barn that they start to squawk.  But they settle down right quick and go back to a life of an occasional cluckiness.

The more you study them, the more out of place they seem — not because they’re bad, but because they seem too good for a ride like Barnstormer.  They have realistic chickeny head movements, a nice covering of feathers, and there’s quite a few of them.  In a ride whose other big themed element is a giant plastic propeller on the front of a rollercoaster, they really stand out as being top notch.

There’s even a modest theme park joke.  It’s difficult to spot in the photo below, but see that little hatch to the left? It’s labeled “Chicken Exit,” something that many parks around the country provide for guests who at the last minute are suddenly too scared to ride.  Even our beloved Haunted Mansion has one of these.  It’s a cute little set piece.  What’s it doing here? 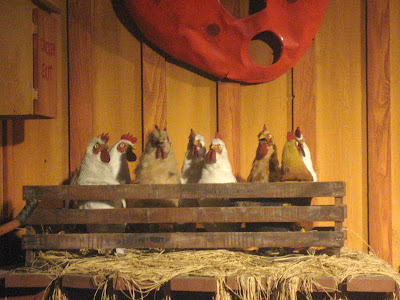 One may recall that Barnstormer was part of the big Toontown Fair redesign of Mickey’s Starland, back in the late 90s.  The late 90s was a strange time for Disney management.  They were starting to emphasize characters and thrill rides rather than intricate story-based attractions  Character greeting spots were popping up everywhere.  Older, unfamiliar faces like Mr. Toad were giving way to monster franchises like Winnie the Pooh.  It seemed you couldn’t eat breakfast anywhere on property without a $25 price tag and a princess shoving her way into the booth next to you.  Over in Epcot, classic rides like Horizons and World of Motion were being torn down and gutted to make way for thrilling GM commercials.

But apparently, there were some folks who thought that there was still a bit of life left in these quaint old omnimover rides.  As Test Track took form over in Future World, someone took a look at one of the old World of Motion show scenes — the famous “World’s Largest Traffic Jam” — and came up with a way to preserve a little bit of Disney history. 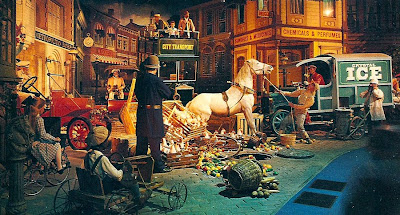