Each of the 54 canonical Disney Animated Features has a connection to the theme parks. And we’ll find them all or die trying.

Today we take a look at the movies of the 1950s and 60s. Other time periods are labeled “The Golden Age of Disney Animation,” but the films of this era are so brilliant, it’s no wonder that Disneyland emerged during this same creative timeframe.

This is the fourth volume of our continuing series, but in case you missed them…

Though the movie is infused with iconic characters and a groovy jungle beat, only a lot of terribly minor stuff remains today—the usual character spots and Jungle Cruise throwaway jokes about books in the jungle.

Those cursed with remembering Mickey’s Starland may recall that characters from Tail Spin appeared in the Disney Afternoon Stage Show. And King Louie scared the crap out of me as a drummer in the Mickey Mouse Revue.

Also the Pop Century Resort has enormous fiberglass statues of Mowgli and Baloo, because nothing says “pop culture” like a giant impoverished kid in a diaper.

For the longest time, the best Jungle Book tie-in was Kaa in Disneyland’s Fantasmic. The Florida version wisely replaced him with a cobra that had about 18 seconds of screen time in Aladdin.

Jungle Book’s crowning achievement came with the opening of Animal Kingdom in 1998. Journey Into Jungle Book was the first show to play in the open-air Theater in the Wild, which is now enclosed and hosting a musical version of a movie with no songs in it.

Journey Into Jungle Book heavily emphasized the songs, but the presentation fell flat. Maybe because of the purple bear fur. It’s also possible that by 1998, audiences just weren’t interested in a long-format stage show based on a movie from 30 years ago.

Journey Into Jungle Book closed after only one year.

They promptly replaced it with rollerblading monkeys.

They never built a classic Fantasyland dark ride based on the story of the young boy who would eventually become king of England, find the Holy Grail, and study the airspeed velocity of an unladen swallow.

On the other hand, it could be argued that the entire design motif of Disney World’s Fantasyland came from Sword in the Stone, given that the whole thing is decked out like a medieval tournament.

At any rate, the Carrousel at Disneyland is named after King Arthur, which of course has many hand-painted panels depicting the classic story of… Sleeping Beauty.

The wizard Merlin has certainly popped up everywhere. Merlin’s Magic Shop was an early tenant at the Magic Kingdom, back when the park had three magic shops.

And of course Merlin is the face of the interactive in-park game, Sorcerers of the Magic Kingdom. 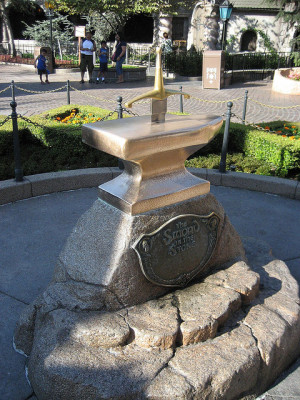 In other news, Archimedes the owl appears in World of Disney’s marvelous bird mural.

There was a time when the Disney MGM Studios caught full-on Dalmatian fever, thanks to the live-action remake starring Glenn Close. We shall not discuss any of those efforts—neither the green-screen backlot crap they shoehorned into the Walking Tour, nor the hideous ABC Sound Studio foley junk that took over the Monster Sound Show.

The animated dogs make an appearance during Sorcerers of the Magic Kingdom—a game which can’t be bothered to treat its source material with any sort of respect. And counterproductive to the film’s message, there’s the usual synthetic puppy furs sold at the various shops on property.

Speaking of which, Cruella de Vil is a much bigger deal than Pongo and the rest. She’s had her own float in parades, and anytime there’s a congregation of Disney Villains, she’s invited.

—am I really going to use this? Yes, I have no choice.

The motherlovin’ All Star Movies Resort.

The only thing tackier is Odell Beckham Jr’s right glove dipped in superglue. And if that metaphor is creatively lazy, then it has something in common with the All Star Movies Resort.

If you can’t think of a park tie-in to Sleeping Beauty, then you probably shouldn’t call yourself a Disney fan.

Small stuff first. Florida has the blue/pink dress gag from the film lurking in the background of Castle Couture in Fantasyland. And for some inexplicable reason, Sleeping Beauty’s King Stefan had a Banquet Hall on the second floor of Cinderella Castle for many years.

The characters pop up from time to time. The three fairies are in the Main Street Electrical Parade and Aurora currently holds court at France in Epcot.

Maleficent is the real belle of the ball when it comes to this movie. She practically owns Halloweentime. Castle stage shows, Halloween fireworks voice overs, etc.

Her dragon form is ubiquitous—Massive steam punk parade floats, Lego Store sculptures, and a towering fire-breathing behemoth in the finale of Fantasmic.

But the coup de grace for Sleepy Beauty has to be the castle. 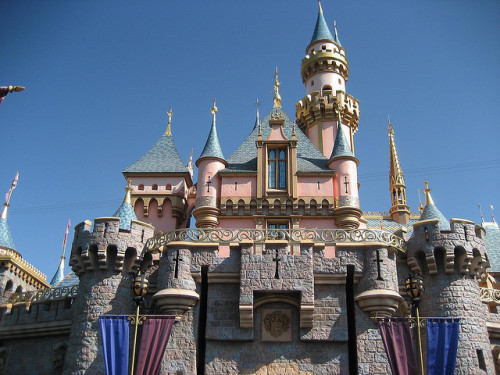 Of the six Disney castles worldwide, Sleeping Beauty gets half of them. The movie may be a bit cold compared to other princess flicks, but when the very first castle in Disney history is named after it, it must be doing something right. The Chateau de la Belle au Bois Dormant in Paris may be more regal, but Disneyland’s Sleeping Beauty Castle is a toy straight out of our imagination.

This is the symbol that sold the nation on the idea of Disneyland. It is such an icon for the company that for years it was featured as the logo for everything—not just theme parks, but TV shows, movies, merchandise, etc. Sleeping Beauty Castle simply is Disney.

Funny how her castle predates the movie by 4 years.

As is the case with many movies featuring realistic animal characters, you won’t find many meet-and-greets from Lady and the Tramp. You’re more likely to get Gigantor versions of the characters at Pop Century Resort, where both Lady and Tramp appear.

You can, however, find an entire Magic Kingdom restaurant named after the film’s most minor characters. Tony, the Italian restauranteur who famously ignored his paying customers in order to serenade stray dogs, has his own Town Square cafe. It features Italian food, of course, and tasteful references to the movie. 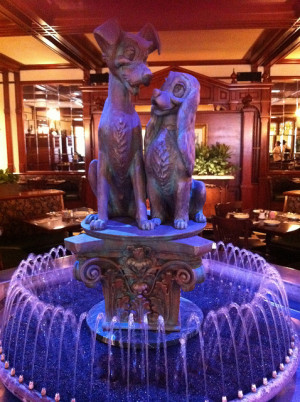 Too bad the food is not as tasteful. Photo © the star trader

Outside you can find a spot where the canine heroes have left their mark. Fortunately, it’s not the fire hydrant.

In Disneyland Paris, the pizzeria also has a Lady and the Tramp theme.

Tinker Bell is one of the all-time great Disney park characters. At castles around the world, she sets off the nightly fireworks displays with a wave of her wand and a dazzling flight from the highest tower.

And if that’s not enough, she sells merchandise by the bucketload, thanks to Pixie Hollow meet-and-greet areas and Tinker Bell’s Treasures toy shops.

Peter Pan is the perfect movie for theme parks. For the longest time Disneyland had a massive Skull Rock, alongside a full scale Captain Hook Pirate Ship and Chicken of the Sea Restaurant, which logically sold chicken dinners (actually tuna). Paris thought the idea was so good, they built their own chicken restaurant. Oh, and a Skull Rock.

On most nights, Captain Hook and Peter Pan transform the Columbia into a travelling stunt show at Disneyland’s Fantasmic while the Crocodile chases them from his own oversized barge. And Peter Pan is one of only two movies made prior to 1989 to get its own segment in Mickey’s Philharmagic.

One of the all-time great Disney MGM Studios attractions was the Back to Neverland tour at the Magic of Disney Animation, starring Robin Williams as a Lost Boy and Walter Cronkite as a pompous animation expert. If any attraction had Disney magic, that was the one.

But who are we kidding? The greatest theme park tie in from this movie is none other than Peter Pan’s Flight, the innovative Fantasyland dark ride that lets you crash a pirate ship through a window. 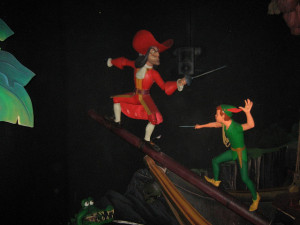 Nothing is quite so magical as a flash picture in a dark ride. 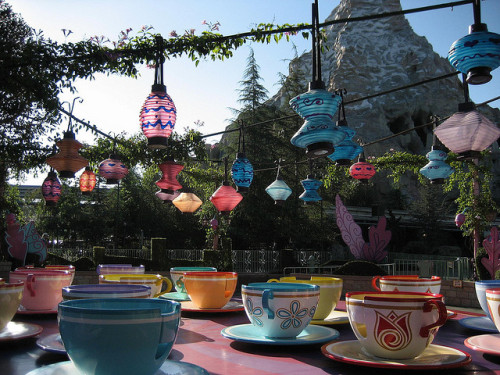 The Mad Tea Party—known everywhere simply as the Tea Cups—has been spinning around since Opening Day back in 1955. It’s a standard carnival ride from a time when Disneyland wasn’t sure just how far it could deviate from the traditional amusement park fare. But unless you’re a giant Sorcerers Hat, icons have a way of enduring and the Tea Cups have been a park staple for 60 years.

Less familiar to American audiences may be Alice’s Curious Labyrinth in Disneyland Paris, where you can re-enact the ending to The Shining inside you’re very own Alice-themed hedge maze.

But for my money, Disneyland’s Alice in Wonderland ride takes the prize. It’s the only Fantasyland dark ride that goes inside and out, upstairs and down. And any ride where you’re sitting on a caterpillar is going to be top notch. 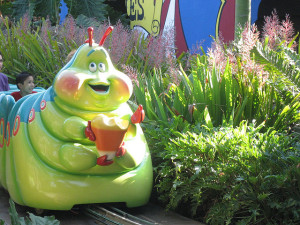 Cinderella isn’t set on an adventurous Neverland isle, nor is it inside a zany Wonderland. Most of the action takes place in the servant’s quarters at a middle-class manor house.

Of course during a brief part of the movie, there’s also a castle.

She has a Royal Table, a character greeting area, and a nice fairy tale hotel suite available only to contest winners and people from the royal family of Iger. 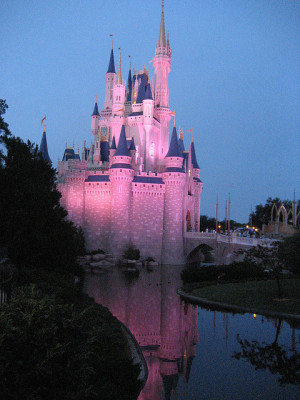 On a more crass note, there are also Bibbity Bobbity Boutiques. These are apparently very popular, though I am not the target audience for these things, and I don’t think you will see any videos of two men in their forties getting their hair done on the next WDW46 adventure.

The Cinderella universe shows up in all the expected spots. Characters, fireworks, parades, Fantasmic. The Storybookland Canal Boats includes a scene or two. Even Prince Charming gets his name on the Carrousel in Florida.

Perhaps one of the more interesting tie-ins is at the Disney Wedding Pavilion, where brides arrive in Cinderella’s very own coach, hoping to avoid a hideous transformation at midnight, reminiscent of the plot of Gremlins.

There also used to be a castle stage show called Cinderellabration, imported from Tokyo.

The less said about that, the better.

As we cross the threshold into the 1940s, we reach the first anthology film on our list. Two stories rolled into one. The deliciously creepy Ichabod and the zany Mr. Toad.

The Headless Horseman from the Ichabod segment is a Halloween mainstay. He introduces the Boo To You parade during Walt Disney World’s hard-ticket Halloween parties, and for years terrorized hayriders at Fort Wilderness (still a Disney World bucket list item that I’ll never get to complete).

Ichabod himself used to be in the highly-lucrative “Keel Boat Souvenir” business before Ichabod’s Landing disappeared from Liberty Square. But Sleepy Hollow Refreshments has been operating for decades, serving the finest waffles on property.

The Mr. Toad segment of the same movie, however, is famous more for its ride than for the film that inspired it. 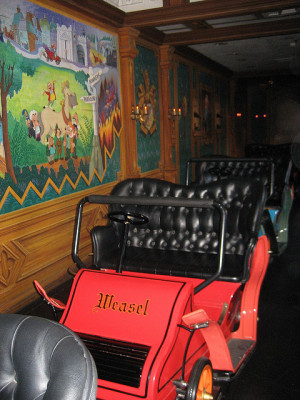 Mr. Toad’s Wild Ride is the outlier—the most subversive Disney attraction around. Not only isn’t it afraid to kill its audience in a grisly locomotive accident, it likes to send them to hell for good measure.

The Disneyland version has a much more charming exterior, while the Florida version was saddled with the medieval tournament look. Disney World made up for it by having two separate tracks, which were slightly different Toad experiences. The Walt Disney World version famously caused a ruckus when it closed for good way back in the 1990s, but Disneyland’s version is still going strong.

Toad Hall also exists in Paris, but as a restaurant. I hear the frog legs are delicious.

Only 10 more movies to go! Stay tuned for Part V!