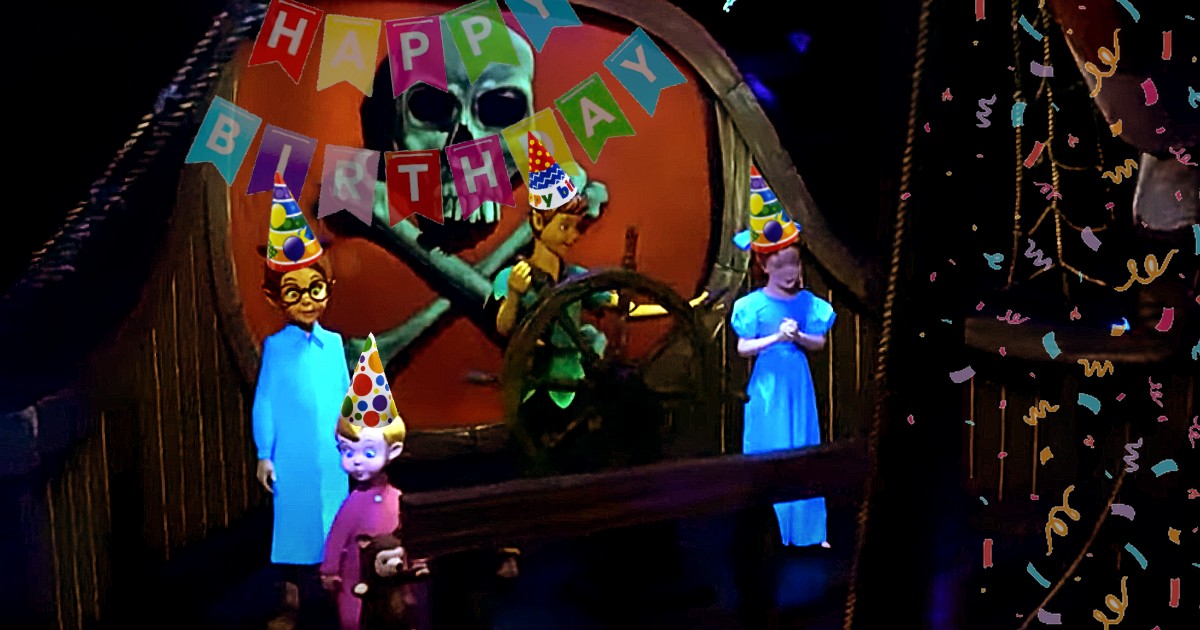 More to the point, pretend it’s a milestone birthday. The Big Five-Oh. You are half a century old. A birthday that maybe you’ve been dreading, but also something to take pride in. A time to reflect about your life. Childhood, college, career, a family of your own. There’s been heartache along the way, and hopefully a whole lot of happiness. You can feel the age in your body, but you’re nowhere close to done. You have wisdom now. And you could tell people a thing or two about life. After all, you have some relatives who never made it this far.

Now pretend that you work with a bunch of histrionic, attention-seeking co-workers who are still going on and on about their 50th birthday, which was days ago.

This is what life must be like for Peter Pan’s Flight, which opened on October 3, 1971.

When Peter Pan’s Flight was born, they didn’t air a television special starring Julie Andrews. Children from the around the globe didn’t pour the “waters of the world” into his moat. Roy O. Disney — if he was even still in town — didn’t give a big speech. He spent the day going chortling with glee over all the money the other rides were making.

At age 10, a whole bunch of other rides opened up at EPCOT Center — two days before Peter Pan’s Flight’s birthday. They got a TV special too. Roy O. Disney was dead, but Disney CEO Card Walker gave a dedication speech.

Peter Pan’s Flight missed the whole thing. It was over in the Magic Kingdom, cranking through its backlog of work.

As Peter Pan’s Flight’s 25th birthday rolled around, it was forgotten again. Sure, there was a giant obnoxious pink cake in the middle of the park. But it wasn’t for him. It was for all the rest of them. Jungle Cruise, Haunted Mansion, it’s a small world (which happened to be Peter’s closest co-worker; they sat right across from each other and would sometimes chat during slow periods).

Every 5 years or so — on July 17 on the dot — he gets news about some distant relative in California. The one he is named after. They celebrate Peter Pan’s Flight out there. Throw him a big party along with all his cousins. It’s a star-studded affair. Drew Barrymore goes.

It must be hard. You’re an all-time classic at this point. A bona-fide FastPass ride. You have some of the highest demand on property. But all anybody keeps talking about is the Walt Disney World 50th Anniversary. New fireworks this, EARidescent that. It must be maddening.

They pretend to involve him, but all they’re really doing is lumping him in with all their birthdays. Like that time on The Office, when Jim decided it would be a good idea to combine all the birthdays for the month into a single consolidated party. It was a disaster. Meredith wanted devil’s food cake. Creed wanted cobbler. Andy wanted Fudgie the Whale. Jim had never been so happy to see Michael Scott return.

They’re out there celebrating the Disney World 50th Anniversary like they actually mean it. Making a big deal out of the “Opening Day” attractions. Most of them aren’t even around anymore. Mickey Mouse Revue? Transferred to the Tokyo branch. The Penny Arcade died years ago. Mr. Toad — they fired his butt. And maybe the Walt Disney World Railroad is coming back, but she’s been out on some sort of mysterious leave of absence for how many years now?

In must be so infuriating to see the Liberty Square Riverboat out there taking a victory lap. It’s not an Opening Day attraction either. It’s precisely 24-hours older than you, opening on October 2, 1971. Oh, and that’s not even the original Riverboat. It’s the one they added in 1973. They literally dropped the original riverboat from a crane, scrapped it, and buried it somewhere in an unmarked grave. So Happy Birthday to that.

Well Peter Pan’s Flight may not be an Opening Day attraction, but we refuse to let it be forgotten.

So here’s to you, Peter Pan’s Flight. Here’s to your playfully mismatched hook and your impossible geography.

Here’s to your fake shadows, your unhappy ending, and your long-lost real-life Tinker Bell.

You’ve given us a lot of joy over the years. You may not be the biggest ride in the park or the most technologically advanced, but you might just be the best. When we think back on the Disney from our childhood, you’re the first ride that comes to mind. You’re the one that kept us from ever growing up.