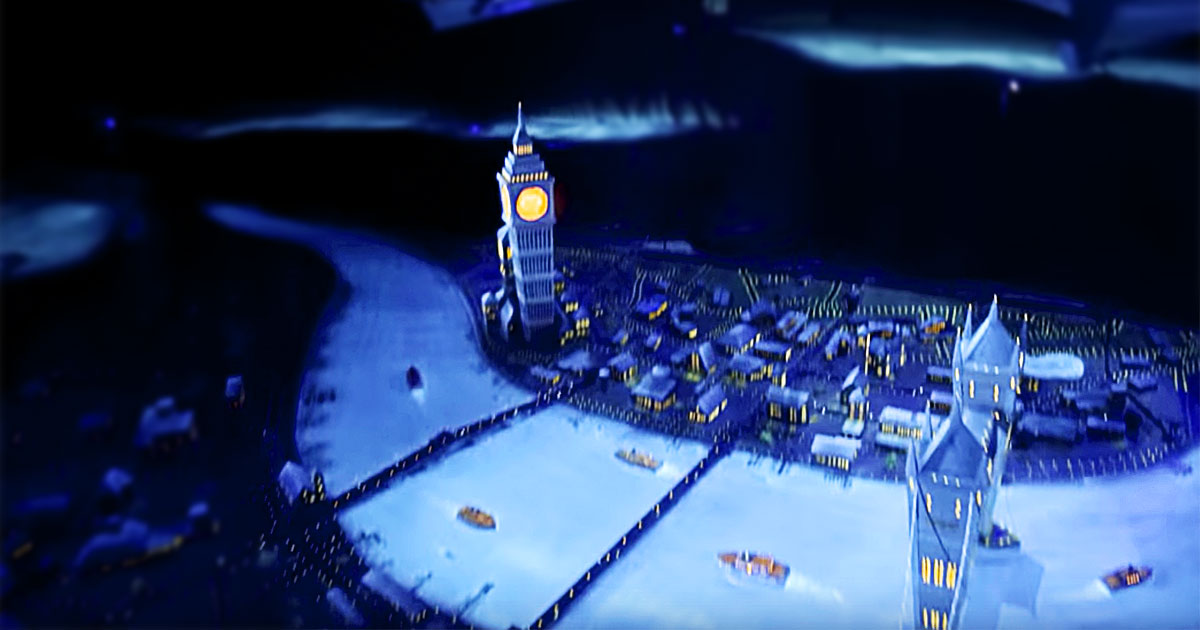 When your pirate ship bails out the nursery window and Peter Pan’s flight over London begins, you know you’re in the hands of a magician.

You sit in awe of this dashing sorcerer with a trim mustache and a command of the stage — enthralled from the moment he pulls Big Ben out of his hat, all the way until he saws Captain Hook in half.

But behind every great stage magician is an itinerant man who buys doves in bulk, hits the bottle a little too hard, and steals ruthlessly from the competition.

At the end of the day, it’s all a trick. Everyone knows the guy’s hiding the rabbit down his pants. The fun is that you can’t spot when he makes the switch.

We like moonlight and music. Once you know how it works, the trick loses its appeal. Nobody wants to see what Peter Pan’s flight over London looks like with the work lights on.

Oh yes. We are that jerk. And just so you know, Rosebud was his sled and Bruce Willis was dead the whole time.

And it gets worse. We’re not going to just spoil the magic. We’re going to question why you even believed the magic in the first place.

So sit back, relax, and let us throw back the curtain on all the ways Peter Pan’s flight over London follows the Second Star to the Wrong.

The Boy Who Wouldn’t Grow Up. And the City That Did

The character Peter Pan first appeared in print in 1902. The novel upon which the Disney movie is based came out in 1911. Internet sources peg the story’s time period as “circa 1900” or “Edwardian.”

Automobiles were certainly invented by then. But it was not until mass production techniques evolved a decade or so later that they really became ubiquitous in American and British culture.

Yet as we dive out of the nursery window, there are no fewer than 3 lovingly detailed automobiles parked on the street right outside the Darling house — each progressively smaller than the last as our perspective is forced higher.

That’s a lot of cars for one street at a time when the most prevalent form of transportation still involved a horse.

And that’s nothing compared to all the headlights whizzing down streets and zooming across bridges as we sail over London proper. There are so many cars on the road it’s like a miniature George Lucas is down there filming American Graffiti.

Because I have no self-respect, I have actually spent several trips through Magic Kingdom’s version of Peter Pan’s Flight studying all the cars leaving Big Ben and roaring across the Westminster bridge. The full bridge span is 827 feet in real life, but those cars traverse it in just about 10 seconds flat.

I’ll spare you the math, but every single one of those vehicles is pushing 60mph — in an era when the fastest car in the world could barely top 70.

Need I remind you that it’s the dead of night, the street lamps are gas-powered, and the pavement is all cobblestone.

No wonder nobody could hear Nana barking.

This Isn’t Even London

Not unless aliens changed it on us in the last century.

Would it surprise you to learn that the Darling house is a real place? At least, it comes from a real place. A little burg called Bloomsbury.

It says so right in the opening narration for the movie. In fact, it’s somewhat autobiographical. J.M. Barrie himself lived in the Bloomsbury area, and Peter Pan as a character is first mentioned as coming from Kensington Gardens just a few streets to the west.

Funny thing about Bloomsbury. It is just a few blocks north of Westminster and its fabled icon, the clock tower containing Big Ben.

Big Ben sits on the bank of the River Thames, which cuts west to east through this section of London. Just downstream from Big Ben is another major landmark, the Tower Bridge.

We can chart the exact route to Neverland in the movie.

After leaving the Bloomsbury house, Peter and the children spend a few moments zooming around roof tops before alighting on Big Ben. Peter points out the Second Star to the Right and they head east, passing over the Tower Bridge.

We know Neverland must lie even further to the east, because the movie shows the children still on course as the Thames empties into the sea.

Given all of these geographical facts, can someone please explain to me why when we exit the nursery in Peter Pan’s Flight, Big Ben sits on the opposite bank of the River Thames?

Furthermore, we appear to be much nearer to the Tower Bridge than Big Ben. Given this configuration, we would be appear to be coming from London’s southeastern quadrant.

Let us politely ignore the fact that the river seems to be bending the wrong way for this layout. And let’s skip over the certainty that London is missing at least one historical bridge between Tower Bridge and Big Ben. But is a little accuracy too much to ask?

Apparently, when it comes to Peter Pan’s Flight, accuracy — much like that pirate ship — goes right out the window.

To add insult to injury, after your pirate ship spends a few moments in a holding pattern over London, Heathrow refuses to give clearance to land and reroutes it to Neverland — which of course lies in the exact wrong direction in the ride.

Most of London is actually a dark shadow, punctuated by blacklight windows and maniacal speed-demon automobiles, with a few boats thrown in for good measure.

The giveaways, of course, are Big Ben and the Tower Bridge. But there’s a third famous London landmark that makes an appearance. Or at least, we think that was the intent before the Magic Kingdom version brought dishonor onto a disabled veteran.

Nelson’s Column is a towering 170-foot monument to Admiral Horatio Nelson, who lost his life in the Battle of Trafalgar more than 200 years ago. Nelson’s Column is still a popular tourist spot today in Trafalgar Square — which, by the way, sits approximately halfway between Bloomsbury and Big Ben.

We can go all the way back to the opening of Disneyland. This scan from the much-beloved E-Ticket magazine clearly shows Nelson’s Column as part of Peter Pan’s flight over London — elevating it to equal status with Big Ben and the Tower Bridge.

In fact, if you ride the Disneyland version today, you can still see the grand old admiral himself, glowering from atop his column.

If you ride the Magic Kingdom version, you’ll see something that kinda resembles him, but has been botched in every significant way.

Let’s forget the geography for the moment. We’ve long since given up on that. But is this Nelson’s Column or not?

Almost all logic would say yes. It’s a fabled landmark, he appeared in the Disneyland version, and hey, it’s a guy standing on a column.

But there is one thing you may not know about the brave Horatio Nelson. This is how he looks in real life:

The dude only has one arm! One eye too, apparently, though that’s less evident on the statue. But the statue in Peter Pan’s flight over London clearly shows an outstretched flag in the right hand.

Why cover up the man’s disability? That doesn’t seem very respectful at all. In fact, it’s kind of mocking. Like leaning over the edge of your pirate ship as you float past and asking Admiral Nelson to give you a high five.

I suppose it’s possible that the Magic Kingdom version is a statue of some other guy on a column, but I could find no similarly famous statue in London to match it. Maybe it’s out there and I was just looking in the wrong spot. After all, it’s not like I could rely on the geography.

But speaking of statues…

Who doesn’t love a good easter egg, right? When it comes to Peter Pan, the actual city of London is full of them.

There’s the famous Peter Pan statue in Kensington Gardens — erected in secret one summer evening by Sir J.M. Barrie so that it would appear like magic to the children.

There’s the Great Ormond Street Hospital, a children’s hospital which famously inherited Barrie’s copyright for Peter Pan when the dear author passed away.

There’s even Sir Barrie’s house, right in the heart of the action.

All of these are sadly not even on the map, due to Bloomsbury getting blasted out of existence by the Peter Pan’s Flight geography.

Don’t they care about the children??

That leaves Big Ben itself. If you’re going to include it, it would be nice to see some attention to detail. Disneyland’s version actually shows the shadow of Peter and Wendy standing on the clock hands — just like in the movie. The Magic Kingdom version saves its super-weird shadow details for elsewhere in the ride.

Just look at that clock face. The movie (and the real tower) have highly stylized roman numerals, correctly radiating out from the center of the clock. Not only does Magic Kingdom’s version go with more straightforward numerals, but the bottom half of the clock face switches the orientation so that the numbers are never upside down.

They can’t even get the time right. In the movie, Peter alights on the clock hand at 8:04. His momentum pushes the minute hand down to 8:15, causing the clock to chime. During Peter Pan’s flight over London in the Magic Kingdom, it’s already 9:06.

Good news though! If you look closely at one of the windows of the Disneyland Big Ben, you can spot one of the better Hidden Mickeys.

Disney Gets it Perfect… Literally Right Next Door!

Maybe all of this wouldn’t be so bad if it weren’t for the fact that right next door to Peter Pan’s Flight — in fact literally sharing the same show building — is an attraction that correctly and perfectly shows Peter Pan’s flight over London in all its glory.

Mickey’s Philharmagic features a painstakingly recreated, three-dimensional, CGI rendering of the Big Ben scene from the movie. And tosses in an irascible duck for good measure.

Yes, you heard that right. The all-time classic Peter Pan’s Flight just got beat by a throwaway sequence in a 3-D movie starring a flying hat.

And that, ladies and gentlemen, is why you should never trust a stage magician.