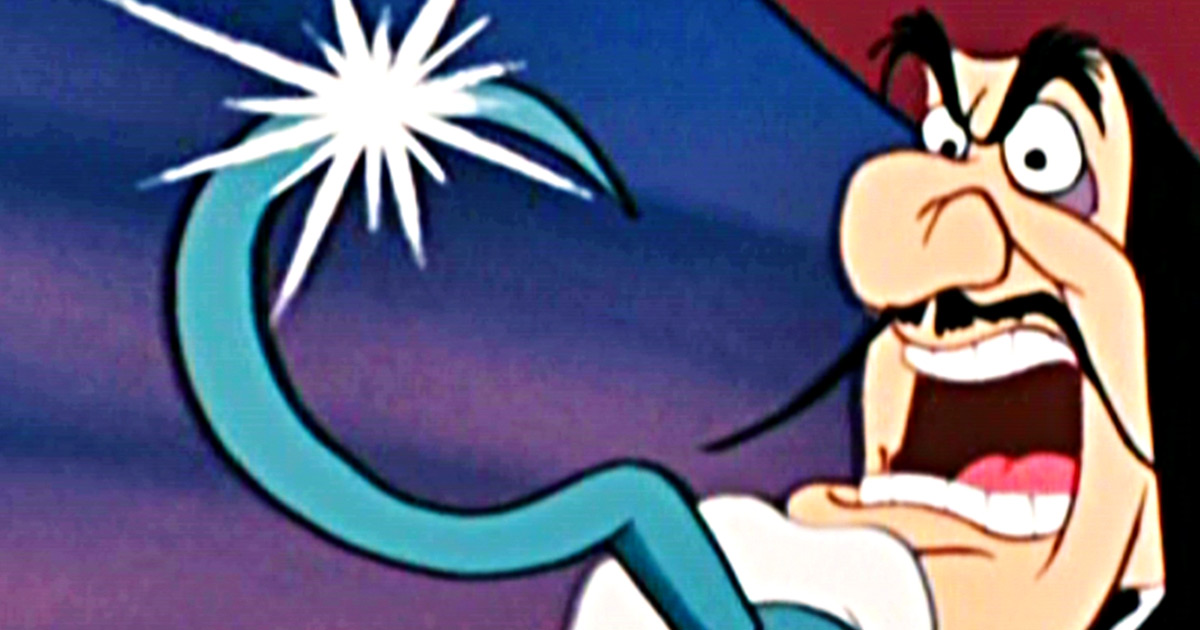 How did Captain Hook lose his hand? According to him, Peter Pan cut it off and fed it to the crocodile. But maybe Captain Hook really is a codfish. Because I’m pretty sure that Captain Hook’s hook is a fake disability.

It wouldn’t be the first time Peter Pan’s Flight has been caught faking (like with these painted shadows). I recently noticed something odd about Captain Hook’s hook. Check out these images from Walt Disney World:

It’s tough to take good dark ride pictures unless you use the forbidden photo flash. But this should be familiar. It’s Captain Hook dueling Peter Pan on the yardarm, holding his sword in his right hand.

The second picture is the finale, with Hook balancing precariously on the Crocodile. It’s clear from both of these shots that Captain Hook’s hook is on his left hand.

If we take a quick 4-hour plane trip over to Anaheim, we’ll see pretty much the same scenes.  Only something’s different.

It’s basically the same scene as in Walt Disney World, but now the sword is in the left hand and Captain Hook’s hook is on his right.

Crocodiles often cause confusion in the Magic Kingdom. In the big Crocodile finale, we again see Captain Hook’s hook on his right hand. His left is fully intact (and somehow his pants have changed from purple to red and his belt buckle is flipped).

Something is clearly fishy with Captain Hook’s workman’s comp claim. Who’s insuring this guy?  And whatever happened to due diligence?

At least each coast is consistent.  Oh wait, here’s the mural from Anaheim’s loading area:

Whoops. We’re back to the hook on the left hand. And in case you were wondering which coast has it right, here’s a still from the movie:

Looks like we finally found something that Walt Disney World does better than Disneyland!

Although as Frank Thomas (Hook’s original animator) will testify, even Captain Hook’s hook in the movie is not consistent.

Now that I think about it, Hook does appear in one other spot in the ride: In miniature, onboard the Jolly Roger, firing his cannon at you. Could that hand be the tie-breaker?  I’ll leave it to you to find out.