I think I read somewhere that journeys into the jungle are supposed to be dark and intense. Nobody ever says “I’ve returned fresh from the jungle.” They always come back half-starved, half-mad, half-naked, and half-bumpy from parasitic insects. But I’m starting to get suspicious about the Jungle Cruise. Maybe it’s just me, but it seems like some scenes are less than realistic.

For instance, the Nile and Amazon and the Mekong rivers don’t actually connect in real life. I can’t believe the Imagineers did not construct a story device to cover this clear logic flaw. If it were me, I would have had a better transition rather than just “Now we’re on the Mekong.” Seriously, how hard would it have been to introduce a little exposition to smooth that over? 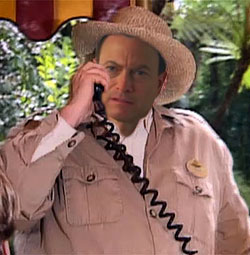 “Now the engineer will put you into hypersleep. Don’t worry, it will only seem like a second or two to you.”

And other scenes are not so realistic as well.

We had a little argument going in the Parkeology offices a few months back — one I’m going to drag out into the public, because there’s nothing more interesting than reading about two park geeks bickering like old women on the internet.

It all stems from a wonderful little video that has been making the rounds for awhile now. This thing is pure beauty, one of the best films I’ve seen this summer next to Guardians of the Galaxy and watching Michael Bay abuse my childhood (because hey, I wasn’t using those memories anyway). It’s a restored home movie of Walt Disney World from 1972 courtesy of our friends at retrodisneyworld.com. It is jaw-dropping.

There’s a lot I would like to comment on about this film, but one thing that really blew me away was a shot of the Jungle Cruise at the 9:15 mark.

If you watch the clip, it is of a crocodile in the Indian Elephant Bathing Pool, who happens to be literally gushing fluid from some kind of tear ducts behind his optical orbs. And then the film moves on to a showering elephant, which is totally unrealistic. Elephants are notoriously stinky.

We tried to find an explanation for this crocodile from 1972, which boiled down to two camps. One was that the animatronic had sprung a hydraulic leak. The other correct view (my view) is that the crocodile is weeping crocodile tears.

The notion of crocodile tears may or may not be a myth. Now the phrase means something like faking pain in order to lure unsuspecting victims close enough to be eaten — in which case Dinorama is a good example.

But nobody seems to really believe this. And even if they did subscribe to some sort of reptilian saline secretion, they certainly wouldn’t buy the idea of a crocodile blubbering like the Bellagio Fountain, dousing elephants with a bucketful of sorrowful lachryma.

Yet as far back as the 14th century, explorers were raving about these deceptive beasts. As described in the awesomely-titled Curious Creatures in Zoology:

In that country and by all Inde be great plenty of cockodrills. These serpents slay men, and they eat them weeping; and when they eat they move the over jaw, and not the nether jaw, and they have no tongue.

Now I have a special fondness for English that sounds as if it were written a long time ago back when men thought the moon was made of cheese, and the one good thing that has come out of this debate is that I will henceforth call these creatures “cockodrills” from now until the end of my life. But one thing is for certain: the idea of crocodile tears is at least consistent with beasts from the wild jungles of India, and since is the bathing pool of Indian Elephants, a super-soaker cockodrill is perhaps a reasonable inclusion. 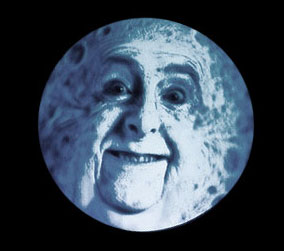 Everyone knows the moon is made of Eric Idle.

One of the coolest aspects about this cockodrill is that it existed in 1972, but I never noticed the weeping until I watched the video. I knew there was a cockodrill in the ride scene, but I figured he must have gotten replaced or broken over time. But when I rode Jungle Cruise last week, I made a point to look out for him and sure enough, he’s still there, and still spouting off on cue like Tammy Faye Bakker.

This parkeologist’s camera captured the cockodrill in breathtaking, non-weeping action — in full-on blurred-sasquatch mode. Are the tears real or myth?

How I never noticed him before, I don’t know. I must have been distracted by all those wacky skinny-dipping elephants. The cockodrill is somewhat relegated to background scenery, tucked off on the left side of the boat just as you exit the sunken temple. He’s got a couple of juvenile elephants nearby, so maybe he’s hoping for a snack. But his jaws still open and his eyebrows are still crying.

Give him a look the next time you ride. He really is making quite a mess of himself.