In 2007, Disney announced a massive makeover of the ailing Disney’s California Adventure park, located on Disney property in California. The fan community rejoiced. We religiously followed every phase of the project, from the demolition of the Whoopie Goldberg theater, to the removal of the Hub Cap icon, to the eradication of the giant lines spelling California inside the California park located in California, to the tragic deconstruction of the much beloved Maliboomer. Basically, we celebrated the removal of all the crap, and the arrival of good things, such as Duffy the Disney Bear.

In 2009, Disney announced the largest expansion in Magic Kingdom history. The fan community — if not rejoiced — then at least spent the next five years bickering about its success. We religiously chronicled every aspect of the Fantasyland project, from the Tangled restrooms to the Belle’s Village restrooms to the Carolwood Station restrooms to the interactive Pooh queue. Basically we celebrated the removal of all vacant crap, and the arrival of new opportunities for poo jokes. 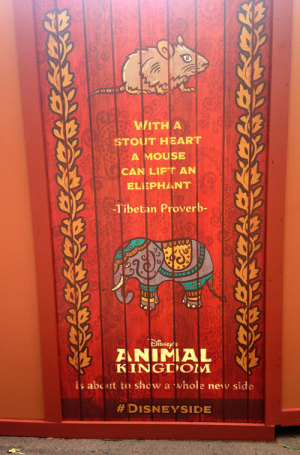 As we close the book on a summer that contained the last little bit of the Fantasyland expansion, one would expect all eyes to turn to Animal Kingdom for the next massive Walt Disney World project. But nobody seems interested. Over in the Magic Kingdom, guests are packing the Mine Train queue to the brim, making a nicely themed kiddy coaster the hottest ticket around. In Hollywood Studios, executives are riding the success of last winter’s mega-hit to untouchable levels of merchandising opportunities, on a shoestring budget/promotion that must make them giggle whenever they look at Diagon Alley. Over in Epcot, more Frozen seems to be on the way, with everyone playing will-they-or-won’t-they at the Norway pavilion.

Meanwhile, walls have quietly gone up all over Animal Kingdom for what I feel is the most exciting Walt Disney World project since, well, Everest. 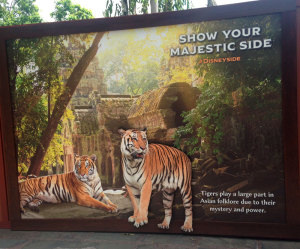 Nice panels with animal facts on some of the refurb walls — but still not as good as the animal bathroom facts at Conservation Station.

The apathy probably stems from two things. First, people really seem to dislike Avatar and/or feel that Disney could have picked something more “Disney.” I myself agree that Avatar is not my first (or second or third) choice for a new themed land. But on the other hand, I think people may be acting a little too self-righteous about the Avatar thing, as if we all didn’t see the movie at least once in the theater. For whatever shortcomings the movie has, it is nowhere near as bad as the three Star Wars prequels, a franchise which everyone seems to think is a better choice for a Disney land. It also is lightyears ahead of other Disney sci-fi-with-alien-animals stories (John Carter Land). Nobody seems to be grumbling about how bad Transformers sucked when Universal put in an awesome ride. I think Avatar will ultimately end up being just a brand name, and the allure of the new land will be in the bioluminescence, the awesome creature designs, the alien flora and fauna which will be incredible even if you didn’t care about the weird story of a space marine who plays Cranium Command with a blue version of Dances With Wolves. It’s going to be the Alien Dinosaur Institute, sponsored by a generous grant from James Cameron Corporation. And what could be more Disney than an alien telling of Pocahontas?

Secondly, Avatar Land is still three years away from opening. It’s locked away behind trees and walls. We can’t even see it rising in the distance. So it’s hard to get really excited yet. But there is so much happening around the park — some of which will start opening next year — that I think it may catch some fans off guard.

I took a quick spin around Animal Kingdom this afternoon. There is literally something new happening every dozen yards or so.

It starts in the parking lot, where a new expanse of asphalt is beginning to spread over what was once a grass field. Call it the largest parking lot expansion in Disney history. As a fan, it will be fun to speculate what the new lot will be called, because obsessing over parking lot names is what fans do best. Personally, I’m rooting for Leonopteryx Rex, because I think that will be the hardest for tram drivers to pronounce.

The front of the Tree of Life is encircled with walls. It’s Tough To Be a Bug is actually under refurbishment while they work on the tree. Rumor says that some components of the nighttime makeover will be added, transforming the Tree of Life into the Mother Tree or whatever the heck that thing in Avatar was called. Or maybe just as background to the Rivers of Light nighttime water spectacular. 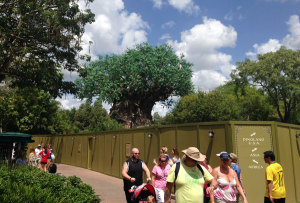 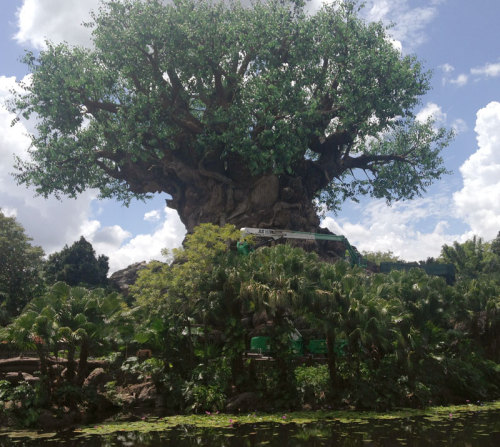 Here a crew is seen power washing a cement tree in full view of the public. Because magic.

Speaking of that, walls are now up around the lagoon from Dinoland all the way around to the Gibbons viewing area in Asia. This is to install viewing zones for the Rivers of Light, which seems to me to be a massive amount of viewing. Not quite up to the sheer mileage of the Illuminations viewing spots, but on par with World of Color in DCA. Portable dams are also installed in the lagoon itself in preparation for the fountain installations.

Nice paneling on these refurb walls on the trail between Dinoland and Nemo. 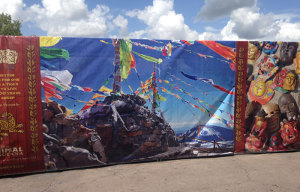 At Everest, the walls take a decidedly Asian turn 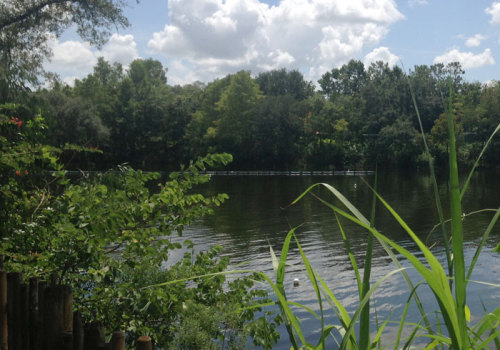 Behold, the beauty of the portable dam 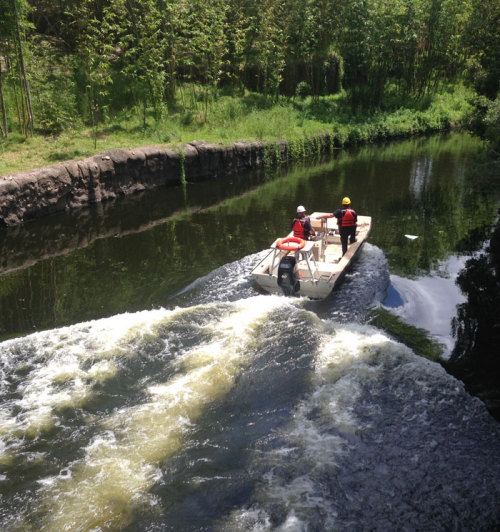 There were some Imagineers toodling around in a speedboat. When they spotted me taking pictures of the portable dams, they zipped away!

Returning for just a moment to Discovery Island, the main shop on the right is being readied for a huge expansion. Ground has been cleared, and vertical construction should begin soon (or may have already begun behind the walls. 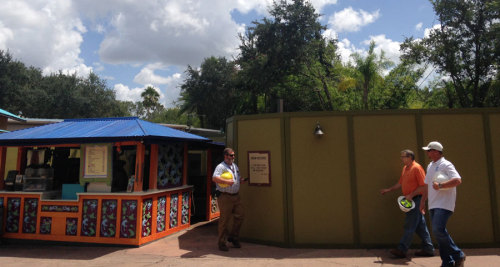 Why, it’s some Disney construction workers, back from lunch!

Not pictured, a new animal exhibit is being readied on the path from Discovery Island back to Africa, rumored to be the new home of the Cottontop Tamarins.

In the back of Africa, more ground is being cleared next to Zawadi Traders/Mombosa, which is rumored to be another full-service restaurant. 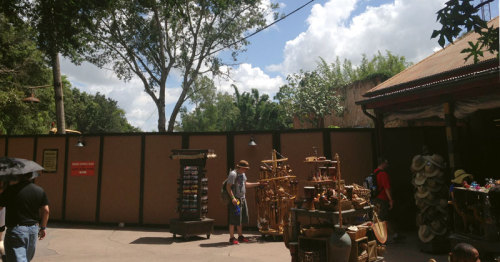 Side note: Mombasa is my favorite Animal Kingdom shop. Sorry, Chester and Hester.

Not pictured, infrastructure work has begun on the Safari itself, in preparation for the Nighttime version of the Safari.

The first phase of the massive expansion actually opened earlier this year, when the Lion King show moved to Africa. The pathway to Pandora is inaccessible, of course. 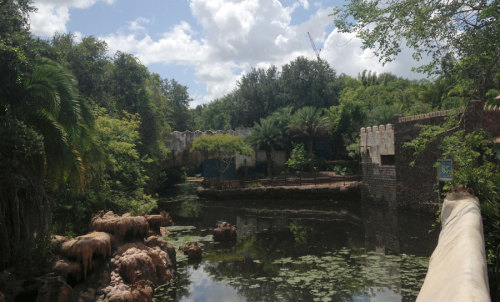 And at last we come to the walls of the main entrance to Pandora. The foliage is so thick that you literally can’t see anything behind it, just the top of a trailer of some kind. Disney has also turned this into a smoking section — probably to discourage anyone from trying to go back there. 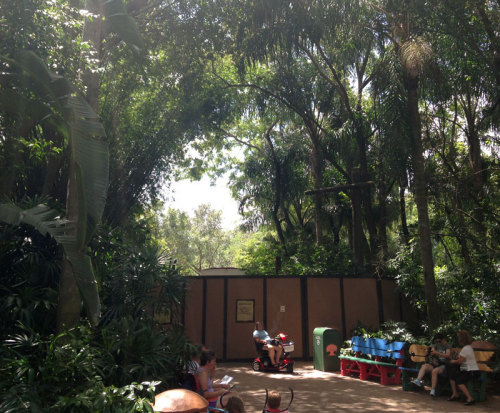 Beyond these smokers lies a vast world of blue elves.

All these various projects should open in phases over the next several years, which will make coming to Animal Kingdom a slightly different experience every time. So much of it is dedicated to turning this park into a nighttime destination as well, which I think will be a huge treat for guests, since Animal Kingdom is already an enchanting place after dark, and a pretty rare opportunity in its current state.

I guess the point of all this is: Even if you don’t care about Avatar the movie, I think Animal Kingdom is poised to become the most exciting park project in the last decade, and if you spend too much time scoffing at giant blue people, you’ll miss the fun watching the transformation.

Now if you’ll excuse me, I need to go back to stalking the new Starbucks location.