Theirs was a love that stood the tests of time…

In honor of Valentine’s Day weekend, it is only fitting that we honor the greatest love story in theme park history.

It’s the story of one man’s passion—dare I say hunger—for his most special love. Never before or since have the parks dared to express such adult emotions on such a gripping stage. Here is a man’s heart laid bare, the notes etched on his spirit now translated to a music of such fervent energy, we cannot help but bask in its powerful graces.

This Disney love story is deeper, more primal, than those chaste princess moments involving first kisses. It knows that love causes us to positively ache—

An endurable pain if that love is returned…

A mortal rending of our souls if that love is unrequited.

We are given only a fleeting glimpse into this forlorn tale. We don’t know if it had a happy ending or not. All we know is that to this man, his true love was the very center of his universe.

I am speaking, of course, of vocalist John Joyce, and his ageless love ballad to that one great transferrable, indestructible property of physical objects in space.

I am speaking, of course, of Energy.

Listen to that heartbeat and you will agree that there is not even a hint of irony. That is a romantic poem straight from the fortress of a man’s most secret emotions. This is not some jokey little ditty designed to teach people about computers.

That is a love song, my friends. Pure and simple.

That the singer is madly in love with something that can be quantified in scalar expressions involving mass, the speed of light, and something called joules is beside the point.

The man is in love, and he wants the whole world to know it.

They lyrics could not be more clear. Even if it it is not possible in this physical universe, he knows that she has so many wonders to show him, both far and near. And she will share her secrets when he’s ready.

And he means to make himself ready. Oh yes. Anything to be held in her embrace for all time.

And without her… why, he will turn this small EPCOT Center preshow into a bloodbath of tragic proportions. For there simply is no living without Energy, and this Romeo would rather poison himself on the alter of bizarre physical science obsessions, than see his Joule-iet taken away from him.

She makes his world go ’round.

I don’t know what happened to these star-crossed lovers. Maybe they ran off to Vegas and got hitched. Maybe her rapper boyfriend MC-Squared got jealous and killed them both. Or maybe she just had a thing for Bill Nye and ditched him.

All we know is that this love song has disappeared and the strange and beautiful tale of John Joyce and Energy has faded into history. 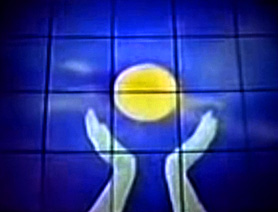 I prefer to think that everything turned out all right. That they figured out how to unlock the power of the stars--fusion power--and it gives them lots of choices for the world ahead. Or for Double Jeopardy.

Because on some days, when the setting sun paints the Florida sky in dazzling shades of heartfire, you can still hear this haunting melody drifting in the background music near Spaceship Earth…