You know how magic tricks are great, until you know how they’re done, and then you can’t not see your Uncle Dave palm the quarter before he reaches behind your ear? Ever since I figured that one out a couple months ago, I just don’t have the same interest in going to magic shows every week, and my Uncle Dave has started to seem a little more creepy in retrospect.

Disney talks a lot about preserving the magic. And I don’t want to be the one to spoil anything for anybody. But you know, Mickey has his own dressing room at the Town Theater, and a little Sorcerer’s Apprentice set-up at the Studios, and a Character Spot in Epcot, and a Safari gig in Animal Kingdom. And in spite of there being only one Mickey, he somehow manages to greet guests in all those different locations at all times of day. I’m not gonna spell it out for you, but just think about that for a moment. Consider all the implications about the so-called honesty of adults. And then tell me how a fat man can possibly fit down a chimney. Especially if you have gas heating.

It used to be that Disney went through great pains to maintain the integrity of their character greetings. If there was a 3:00 parade in which Mickey was expected to appear, his character spot would shut down for half an hour. A mouse can’t be everywhere at once.

That’s why I’m shocked that a film like Muppet Vision 3-D, which has been around for nearly a quarter of a century, can so profligately shatter the illusion every time it runs. Like Uncle Dave’s quarter trick, once you spot it, you can’t unsee it. So be warned before you continue.

Most of us can recite MuppetVision in our sleep. Take this little test and see if you can fill in the blank. Those of you go 5-for-5 get an official Parkeology Certificate of Achievement. Those of you who don’t, study harder.

You know all the cues. You’re ready for Fozzie’s flower. You obligingly turn around to look at the Chef. You know which props Sweetums will be carrying (flashlight, then firebucket, for those of you that flunked the quiz).

Let’s talk about that Sweetums for a moment. He’s the live performer who gets to enter the show on three separate occasions. First to look for Bean, then to put out the fire in the orchestra, and then right at the very end, where he gets to say “Wow! What an explosion!”

There’s just one problem with this last Sweetums. He’s standing in front of the orchestra pit, jabbering to the audience while robo-Kermit pilots a firetruck into the gaping hole where the screen once stood, after Chef blasts the theater apart with the cannon (I told you there were spoilers).

But in spite of the all the smoke and Kermit being all 3-D at the end of a rescue ladder, what goes unnoticed is the second Sweetums. 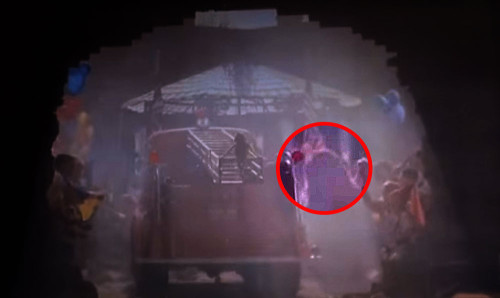 Admittedly, you can’t tell jack squat from that poor screen capture, but in real life, that amorphous blob is clearly visible as Sweetums, standing outside the theater among the casual tourists who have just had their once-in-a-lifetime trip to Walt Disney World turned upside down by a bunch of puppet terrorists. It’s much more tempting to notice Pluto, who is also outside in walk-around form. Or maybe the old style Disney World balloons. Or the fact that it is daytime outside the theater, but you’re watching the show at night while waiting for Fantasmic. But regardless, Sweetums is in two places at once. So which one is the real Sweetums?

By the way, a few comments had mentioned this on a previous Muppet Vision post I wrote nearly four years ago, but I only just got around to noticing it myself. And I wanted to make sure everyone else got a chance to see it. Just in case you have an Uncle Dave.