A fun little diversion today, as we have a guest post from none other than my sister.  I am not joking when I say she is obsessed with Bing Crosby.  Seriously, we’re thinking of having an intervention.  Anyway, enjoy this chronicle of all the references in the parks to Bing.  It’s sort of like the Kevin Bacon game.
——–
There is very little question over who is the most celebrated Disney character of all time – that extraordinary little pedagogue from a sleepy little hollow.  Therefore, it is no wonder that a blog committed to the lesser-known Disney has avoided the topic thus far.  No sense overstating the obvious.  But the fact of the matter is that behind the braided ladies’ man is a voice not often recognized in the world beyond Ichabod.  As we’ve all prayed witness to his animated adventures time and again (with special marathon viewings around Halloween), I’m certain that we could easily imagine the face of a one Bing Crosby, as his ears are not that unlike the set portrayed on Mr. Crane.
And while Mr. Crosby remains a mystery to most amateur parkeologists, the fact of the matter is that he is most prevalent throughout the parks if one has a keen eye or ear.  I use the word “keen” because it’s one you might have heard in his time, though perhaps not too frequent now.   Although he is often mistaken for an orphaned elephant who learns to fly (big ears, you know), one might pause to wonder now, “Where in the World IS Bing Crosby?”
I’ll give you a good start.  In fact, I’ll bet that most of you already have a similar photograph in your Disney albums and scrapbooks.  It’s said to be the most photographed icon in the parks.
There was a time when Bing Crosby, himself would arrive to issue such voice lessons right there in Liberty Square.  But the guests, expecting Ichabod instead, began to complain and question who this Crosby character was.  Based on the popularity of the attraction, however they later opened The Ichabod Crane experience at the Superstar Television Theatre at Disney-MGM’s Hollywood Studios (only partly joking here.  The Legend of Sleepy Hollow is one of the scenes you can dub in the post-show to Sounds Dangerous).
Crosby graciously conceded and fled to London in 1976 where he masqueraded as a living legend of American Film and Popular Music until his untimely death in 1977.  His other film credits have remained undiscovered apart from the classic 1960 championship World Series game between the Pirates and the Yankees (where he starred alongside Keith Richards).  Until now…
Since you’re already curious, now, head on over to the Studios (one-time home of Ichabod Crane Experience, hereafter referred to as ICE) and wander across the street into the Hollywood Brown Derby.  There, you might find caricatures paying homage to the Cros and the Snos, as pictured below:
I know what you’re thinking!  “Wait a minute!  I’ve seen that mug, somewhere before!”  And it’s true, somewhat.  See, Bing really got his start in dance bands and on radio.  So until the first “moving picture” came out in the 50s, no one had really seen that mug anyplace.  But they heard his voice.  It’s rumored that Bing occasionally pops up on the radio shows broadcast over Sid Cahuenga’s, but never verified by a Parkeologist.  (I can verify it, though since I’m only moonlighting here for a moment).
However, if you’ve ever taken a step inside the house, you might have seen a photograph of Bing (as portrayed by Sid Cahuenga, as portrayed by Danny Dillon, Hollywood impersonator).  Yes, that’s a roundabout way to get to Bing, but we never said this was going to be easy.
Let’s try another spot.  If you’re in California, you’re sure to hear Mr. Crosby serenading you with a clever rendition of “San Fernando Valley” as you enter California Adventure beneath the stunning Golden Gate Bridge.  (But you might have to stand and wait for the music to loop back around).
And taking a respite visit to the Tiki Room, you’re sure to hear a little “boo boo boo-ing” (another Bing trademark) followed by a chorus of “bing!” from the tropical birds.  Birds were always fond of Mr. Crosby.  I suspect it had something to do with his outstanding whistling prowess.  If you can find a copy of the soundtrack to Tokyo Disneyland, listen carefully to their version of the Tiki Room.  The music is virtually identical, but they actually refer to “Bing Crosby” by name.
But the surest place to meet Bing in Disney World (or anywhere else for that matter) is to wait for the Christmas season.  His voice will be filling up New York Street as noticeably as the lights cascading down the buildings. 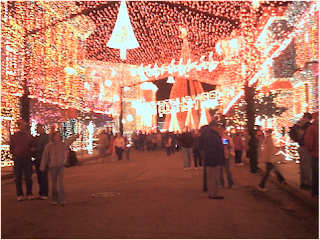 And if you’re not sure whether it’s him, he’s usually the guy you hear singing “White Christmas.”  (Or wearing a flaming pumpkin for a head).