If you don’t mind, I’d like to talk about something serious that is affecting the parkeology community. It’s the sad dark side to being a Disney park fan: Addiction.

This social disease has claimed more than its fair share of Disney bloggers. It’s not something we like to talk about, but I’m afraid it must be addressed before I have to do an intervention with Progress City, or check the Imaginerding guys into an institution.

In the real world, we know of habit forming substances. Meth. Coke. Blow. Speed. You know what else is habit forming? Sugar-coated candy almonds.

These little bits of mind-altering pleasure clearly don’t belong in the so-called family friendly environs of Walt Disney World. Nobody wants to spend a day in the parks, surrounded by nut junkies, hopped up on cinnamon. We don’t need the Disney blogosphere flushing their paychecks down the toilet in search of the next almond fix.

In a perfect world, we would have ad campaigns against such behavior. Disney would open up an onsite nut detox clinic, there would be twelve-step programs listed in every guidebook, and Almondholic AnonyMouse meetings at every D23 gathering.

But I suppose in the short term, we should be thankful that the FDA, the Surgeon General, and the fine nut vendors at Disney’s Boardwalk have started to get the word out. Here’s the sign that made me stop in my tracks while running past the vendor near the Boardwalk Pizza Window: 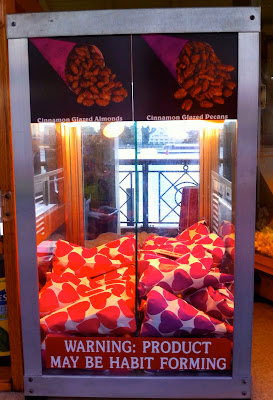 Finally this danger has been identified. The first step in solving any social problem is calling a spade a spade. The nuts are a danger to society, and I intend to devote all of my volunteer time this year to eradicating this horrible addiction.

I think I’m just the person to do it. Unlike some people, I can quit eating these things any time I want to.