Sorry we’ve been kind of quiet lately. As the dedicated parkeologists that we are, we have been jetting all over the world to bring you hard-hitting articles about Paris, Disneyland, and Hawaii.
In other words, we have been vacationing, and trying to figure out if there’s any way we can claim a tax deduction on this (so far, all signs point to yes, if we are willing to do some jail time).
In the meantime, I thought you might enjoy another picture from the same source as that Stage One photo we talked about last week. 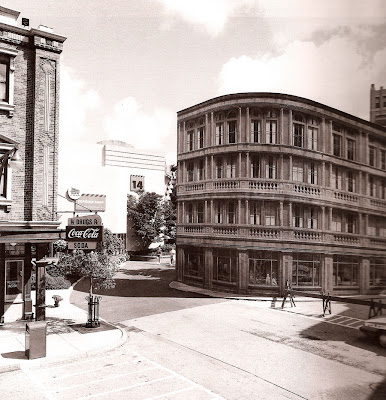 Doesn’t look too different, right? But to the Hollywood Studios regular, that “Disney MGM Costume Shop” occupying Stage 14 is a bit of a change. Click on the picture to embiggen, and you’ll get a better look at the sign.
This store is now called the Writer’s Stop, and has been themed to “Writing” all the way back to when it was just another replica of Ellen Degeneres’s short-lived sitcom (called “The Ellen Degeneres Show” or “Ellen” or something like that. Whatever it was, the title was catchy and clever). Yeah, you heard me. An entire shop themed to writing. Basically it’s a place to buy books and snacks. Which is actually pretty good theming.
And for those of you that don’t know your 1990s park history, there was once a time when Ellen Degeneres, Bill Nye, and Robin Williams were the biggest stars in the Disney universe, and each was featured multiple times around the various theme parks (the fourth biggest was Phil Hartman, who scored gigs in both the new Tiki Room and the original Alien Encounter).
This shot clearly predates this time, and to be honest, I don’t recall the “Costume Shop” at all. I wonder what they sold? I doubt it was costumes.