Long ago, when I was just a boy, my family brought us to Fort Wilderness. Not to camp, of course. We weren’t paying $20 for a camp site. Not when we had a van, and there were plenty of empty parking lots.

I have fragmented memories of this visit. I’m pretty sure it involved a walk on the beach, where brain-eating meningitis was an absent threat, and scores of tourists splashed in the waves of the watercraft as they ferried guests to and from Discovery Island.

There was something called the Hoop Dee Doo Revue. We didn’t eat there, of course. No way were we paying $15 a head for fried chicken and country songs. But we walked around Pioneer Hall, fantasizing we were rustic outdoorsmen like Han Solo.

At the end of one path was a place called River Country, which Disney billed as a recreation of an “ol’ fashioned swimmin’ hole.” Marketers have known for years that kids are drawn to anything labeled “old fashioned.” And as a former kid, let me tell you, nothing sounds as thoroughly refreshing as swimming in a hole. And to top it off, when you intentionally drop consonants, it just colors the whole thing with the thrill of cheatin’ death.

We did not swim, of course. My daddy wasn’t paying no $12 a head. The brain-eating meningitis of the lake water was good enough for us, by gum. But we did stand out by a covered wagon and watch the young families in their ol’ fashioned swimmin’ trunks walk through the turnstiles into a paradise of leaky water towers and faux mudslides. And we did not envy them in the least. Also, these grapes taste sour.

Yet there is one thing I remember very clearly about that early visit to Fort Wilderness, and it was free, which meant we spent several minutes looking at it. The name on the plaque identified it as the Lawn Mower Tree. It was a typical Florida tree, with gnarled, knobby roots and a wide leafy canopy. At its base entangled in the roots, were the rusty remains of an old lawn mower.

The plaque had a whole story to go with it. I’m paraphrasing, but according to legend, Farmer Such-and-Such parked his lawnmower near this tree way back in 19-freakin-31, and went inside for a glass of whatever. When he returned later, the tree had grown so much that the roots had begun to devour the lawn mower. And rather than chop it out, Farmer Such-and-Such left it behind and bought himself a riding John Deere.

I found the story enthralling, mainly because I think the plaque writer was unaware just how sinister and Stephen King-ish it sounded. I mean, the farmer stepped away, but for how long? Just enough to drink his lemonade? Overnight? All winter? How much time does it take a tree to suck an entire piece of mechanical equipment into its dry, bony root base?

Kids were sleeping next to these succubus Floridian plants, in bare camp sites in the middle of nowhere! Who knows how many tents these things devoured! Does the blood of lost children still course in the underground rivers below Fort Wilderness, polluting Bay Lake with more brain-eating meningitis?

At the time, I had no doubt the story was legit, a local Floridian legend. I suppose it’s possible that some hillbilly really did lose his lawnmower to this tree, in a non-sinister way (a decade absence or something) long before Disney every bought the land. In retrospect, it’s also just hokey enough that it could have been a Disney gag. If so, it seems like a lot of effort for the landscapers to find an omnivorous tree and plant it over a lawn mower.

At this point, I’m going to assume the truth is somewhere in the middle. That the tree was there before Disney got there and had somehow overgrown onto some deserted machinery. The story with the farmer leaving his mower unattended is probably an embellishment.

Last weekend, I found myself at Fort Wilderness again, and resolved to go looking for the tree. I’m happy to report it’s still there.

The plaque is long gone. In fact, so is most of the tree. It’s a bit of Disney history swallowed up by time. How many tourists walk by it today completely unaware of the legend? Every single darn one of them, I’m sure. 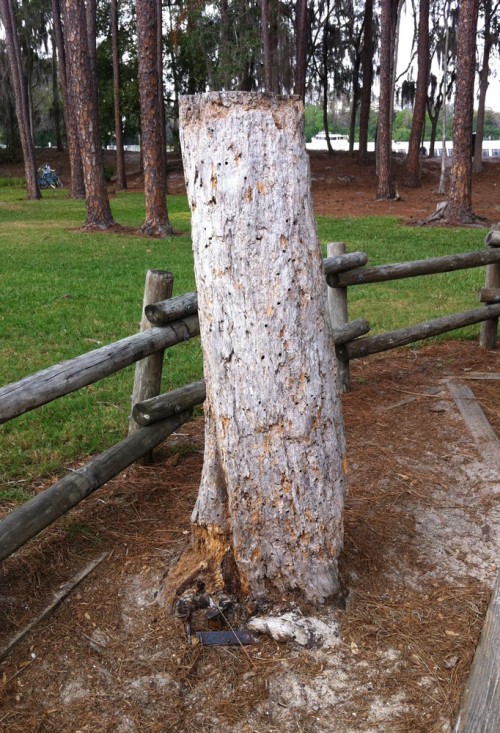 Like a skeletal finger from the loose Florida soil…

But somebody in horticulture has left the stump of this thing in place, so as to not upset the druid demon spawn that lives in it. And the rusted bits of the mower can still be found in its roots. 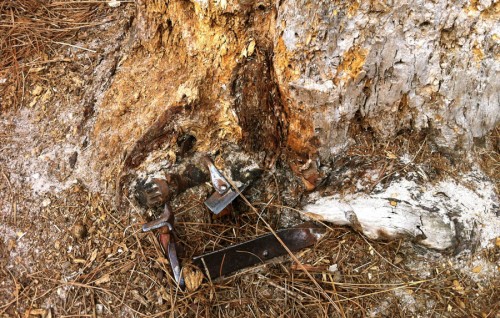 Buried alive is nothing, next to the terror of being eaten by a tree. If you go there, check out both the front and back of the tree. There are metal bits on both sides.

For those of you who wish to make your own pilgrimage, it’s next to the sidewalk on the left side of the path as you approach the marina. It’s a thin stump very near where the golf carts are parked.

If you visit, say hello for me. And then say a prayer. And bring a sacrifice. 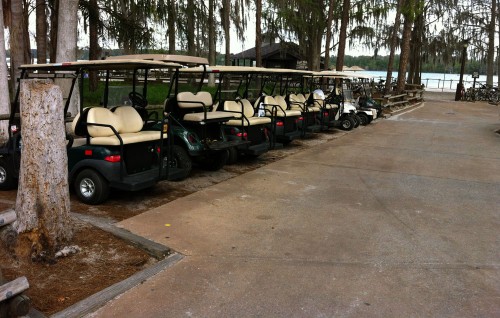 Blissfully unaware that they are parked next to a portal to hell.