Lots of companies are good at reinforcing the necessity of their products (posted from my iPhone). But only Disney can discover the craziest niche markets and then sell the heck out of it to a captive audience.

It seems to have exploded in the last 15 years. Weird stuff that nobody ever thought worthy of selling in a theme park. But not only did Disney sell it, they figured out a way to make it pervasive. Many of these things are not only part of the normal Disney experience, but even the competitors are copying them.

And it all began with…

As collectible niche markets go, little custom pins do not seem all that lucrative. Pins serve no practical purpose. You buy it for the design and for their function as a small memento of your vacation and to assuage that strange human desire to “collect them all.”

Yet somehow Disney took this little keepsake and rocketed it into a mainstream tourist must-have. They did it with something called a lanyard.

“Lanyard” was not even in my vocabulary in the late 90s, maybe because I wasn’t going to a lot of sales conferences at that stage of my career. The first time I saw one, I thought it was a camera strap. (kids, a “camera strap” is a lanyard that used to carry an expensive and bulky photo-taking piece of equipment during the Babylonian empire). Disney started tacking these collectible pins to these straps and allowing Cast Members and guests alike to wear them around their neck for display — like Flava Flav, only without any useful time management devices.

A different pin for every minute of the year!

With the pins now fully on display, they next set up entire tents where guests could interact and trade them. A constitutional amendment was enacted, requiring Cast Members to perform any trade asked of them, setting the Cast Member Rights movement back several years.

Disney started offering “limited” editions of some pins. Suddenly the commonplace art of buying stuff at a theme park turned into some sort of Mel Brooks mad-cap adventure, with guests competing for the select few of each new design, which seem to get introduced every 2.6 seconds.

I honestly thought the pin trading craze would wear off in a year or two, as soon as people figured out just how much money was being spent. But the industry is bigger than ever. I recall overhearing some collector at one of the trading stations (who carried all his pins in a matching 5-piece luggage set, with a few hundred left over for a chain mail vest). He was telling another guest that these pins represented his retirement portfolio. Knowing my completist personality, I’m fortunate I never got sucked into the craze myself. 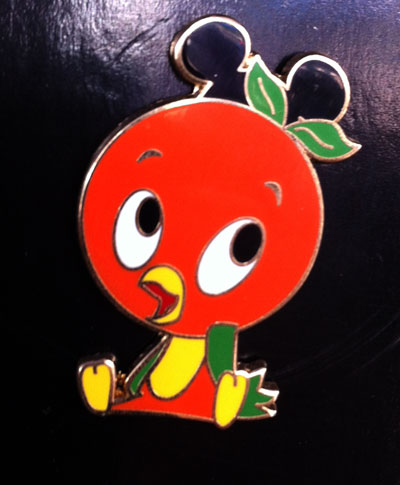 Okay, so this niche market isn’t as lucrative as the pin trading. For one thing, you can’t trade apples, because they turn brown too quickly. And if you stick too many on a lanyard, you just end up looking like you’re trying to ward off vampires. But there was a time when if your name wasn’t Snow White, Disney apples came in 2 flavors: Candy Apple Red and Carmel.

These days, if you’re eating a plain candy apple, you are identifying yourself as a member of a bygone American society that still churns butter and rides horse buggies.

Apple confections are everywhere now, from Mike Wazowski eyeballs to sugar-coated mouse undershorts. They’ve got marshmallows glued on in the shape of ears. Some half dipped in chocolate, half in butter, half in bacon grease (150% coverage!). A few of them have been merged with so many different unhealthy substances, they’re now honorary members of the Belushi family. The apple is just a frame to hold the candy-sugarfat masterpiece on. If you eat one of these things a day, the doctor isn’t going to stay away. He’s going to personally back the ambulance into your driveway.

Like the apples, the traditional Disney mouse ears came in two flavors: Plain black, and Plain black with your name stitched on the back. They had a simple — dare I say elegant — design. Now they have so many different mouse hats, with so much other superfluous decorations stuck on them, you’d think they were iconic pieces of architecture. 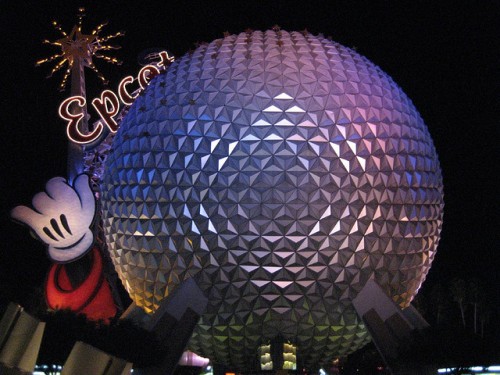 Mouse hats are not just for mice anymore. Every major character has one. Mater, Dumbo, Goofy, Lightning, R2-D2. There are mouse hats with princess tiaras, mouse hats in the style of World Showcase pavilions, mouse ears that are actually rabbit ears from a character Walt once drew for a few months in the 1920s . Kids today are no longer content with a simple Mouseketeer logo and chin strap. Now we need a Peter Pan feather, a duck bill, and some blinky LED lights to make sure we don’t feel ridiculous. 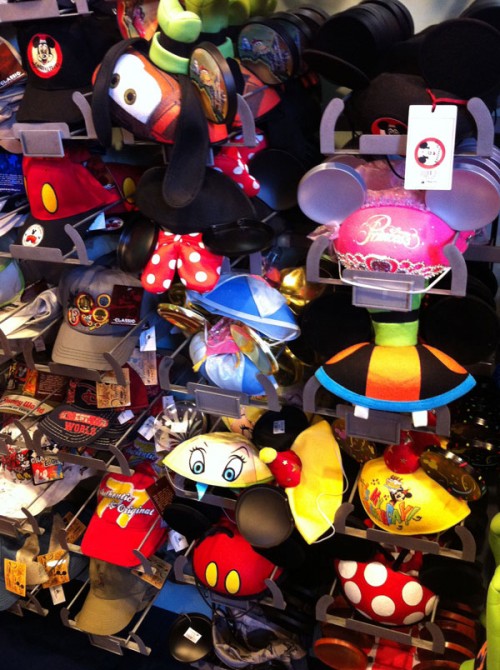 Just like Annette and Karen and Bobby used to wear.

Even crazier, Disney has now started introducing souvenir miniature mouse hats, for when you want the mouse hat experience, but don’t want to cave to the societal pressures of wearing them on your head — or if you just have a really sick desire to humiliate your pet.

This niche market isn’t something directly monetized, but to old timers like me, it’s almost inconceivable that today’s guests view the character experience as on par or even more important than hitting major attractions like Space Mountain, Big Thunder, or the Swiss Family Treehouse (hey, I can dream). Characters were part of the background scenery in the early days of the park, a bit of spice to season the mixture.

The idea of a cordoned-off themed location with a proper queue and FastPass for a character meet-and-greet would have been crazy talk in 1985. But when princesses can command 60-minute wait times and entire buildings in Adventureland have been taken over by young women in fairy costumes, the old-fashioned rides and attractions are starting to take a back seat.

As a sign of the changing times, look no further than New Fantasyland. When it was first presented to the public, it did have a new Ariel ride, but the overwhelming majority of the land was taken up by acres of princess greeting areas. Snow White’s cottage, Sleeping Beauty’s cottage, Cinderella’s Chateau, Belle’s cottage (for princesses, they seem to spend a lot of time in log cabins). They eventually axed most of the cottages, replacing them with a rollercoaster so that somebody who wasn’t an 8-year-old girl would have something to do. But the characters didn’t go away. They just moved into Snow White’s original cottage.

Look at all the Disney marketing of the day. Along with the obligatory shots of spinning teacups and expertly photographed fireworks, it’s almost non-stop images of children running hand-in-hand with Woody and Buzz, teasing Chip and Dale, dancing with Sleeping Beauty. 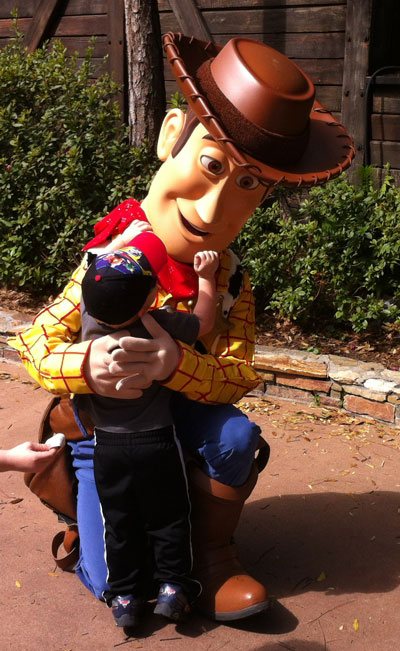 No, Woody is not about to eat him.

The character craze shows no sign of abating. Turns out live mermaids are infinitely cheaper than building a replica of Mount Everest. They’ll sell blank books of stationary in the gift shop for those autograph hounds who love the thrill of getting a celebrity signature, but without the hassle of actually finding a celebrity.

And then, because Disney wants to see just how far the average consumer is willing to go, they’ll staff these character greeting areas with something called…

The idea of an event photographer is not a new one, thanks to weddings, proms, and in some tasteless cases, funerals. But only Disney could take the great American tradition of hiring some photographer to follow you around to a hundred different locations, they hired a hundred photographers to lurk in spots where you might turn up.

The fact that the program is so successful is one of the great indicators of our society’s capacity for laziness. Rather than lug around a camera, we’d rather just pay some else to stash one reasonably close to attractive scenery. The fact that we all have 42 megapixel cameras on our iPhones apparently has yet to cross our minds.

At first, this doesn’t look like it belongs on this list. But that’s because you’re not the market. What matters is that Disney now has a statistics-generating monster that can prove whether the marketing campaign it has been running in Ames, Iowa is working.

Survey takers have multiplied in droves in the past decade. You simply cannot leave a park these days without seeing at least three or four of them roaming the exits, trying to ask you about your day. Or you as you enter the gates, asking you your zipcode. They roam in packs, circulating through various lands to garner that oh-so-valuable feedback and to devour the occasional wildebeest.

There is no tangible benefit offered to the customer. You are trying to get somewhere (usually in or out), and somebody with an ipad is stopping you and asking if you can answer 45 brief questions. But for evidence that surveys play a huge part in the decision making of the company, look no further than the Scene One queue refurbs lately, which have emerged because “surveys indicate our guests hate lines.” I’m not sure if that is a newly discovered truth, but I’ll go with it.

All I can say is, I’m glad Walt always tried to give the public what he imagined they wanted, rather than what they told him they wanted. If it was up to them, we’d still be mired in Jack Sparrow sequels and Epcot would be overrun with Mickey and the gang.