Before I touch on the cool thing that caught my eye this week, I have to post about something that really caught me off guard. Disney, to my stunned amazement, likes to merchandise its movies.

Okay, that was tongue in cheek. This is the same company that only a few weeks ago was selling dead bird headgear in honor of the latest zany Johnny Depp character, bringing the total number of simultaneous zany Johnny Depp headgear offerings to a record high of three — four if you count Fear and Loathing in Las Vegas.

But their latest batch of products did take me by surprise. In the last couple of weeks, merchandise for Planes has burst free from the stock room and prominently perched itself on the high traffic display stands of every gift shop from the World of Disney to that forgotten Rocketeer slushy stand. This gives off the impression that Planes is every inch a major Pixar motion picture, and your children simply must get their hands on all the latest amazing characters. But Planes is not a Pixar movie. It began life as a Direct-To-Video picture by an offshore (aka “cheaper”) animation studio, in one of those corporate cash-grabs that were so common in the 90s. It features a breathtakingly original plot in which a young upstart dreams of competing as an air racer, and must get help from a grizzled veteran to defeat the villainous star of the racing circuit. Given that Direct To Video movies rarely turn out to be major theatrical hits and never translate into theme park attractions, it’s probably safe to say we won’t be getting a Planes Land any time in the near future.

Still, there must be some feeling within the company that Planes is going to do quite well. The Lone Ranger, for all its hundreds of millions in budget dollars, only ended up with a few t-shirts, a static Silver figurine, and the aforementioned zany Johnny Depp headgear when it came to theme park merchandising. That’s nothing compared to the breadth and scope of plush planes, carded action figures, remote control doohickeys, and propeller-snouted cupcakes that have hit the shelves, along with racks of t-shirts, baseball caps, and “Airline Fuel” themed marshmellow beverages (I may have made that last one up). There are now more planes on the shelf at Disney World than were used in all of World War II, and now that I think of it, a war movie would have made a better plot for a film about anthropomorphic aircraft. 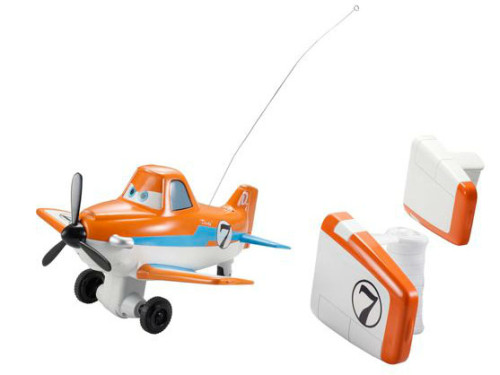 Lost in all the hype –is there hype? Is there? I mean, aside from the merchandise, is Planes on people’s radar? (see what I did there) — is the fact that Planes is not the first Disney movie to feature a talking, self-aware, winged mechanical beast. That honor belongs to Pedro, who got his very own segment in Saludos Amigos. Pedro was a small mail plane who flew across the mountains in Chile, to near disastrous effect. One look at the cute little guy and one wonders immediately just how derivative the Planes movie can get. Aside from the two dimensional animation, he looks like a perfect match. He also isn’t aping his plot from a previously successful series entry. 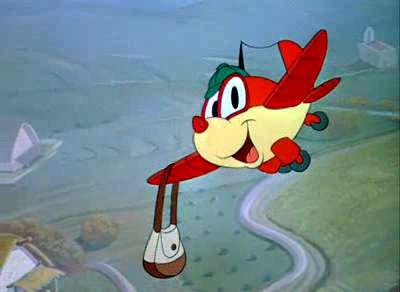 Lose the jaunty cap and the man purse, and Pedro could be a major Hollywood action star.

Pedro, of course, was introduced to audiences in 1942 (hey, that’s when World War II was going on!) He promptly disappeared from public consciousness in 1943 along with the rest of Saludos Amigos — except in Chile, where they seemed offended that their country was represented by a little mail plane and responded with something called Condorito, which wikipedia informs me is Latin America’s most ubiquitous comic strip characters. That means that Pedro has been missing from Disney promotional material for more than 70 years. Meanwhile, Shrek still has his own 3-D movie. Is there no justice in the Universe? (see what I did there)

Yet last night, something brought a smile to my face. A little detail I hadn’t noticed before in Storybook Circus. I’m sure other bloggers caught this and reported on it a long time ago, but I confess, I don’t spend a lot of time studying Barnstormer, since I find its short duration and sloppy theme to be the worst in the Magic Kingdom. But as I sat there waiting for my stunt plane to leave the station, I happened to notice an old gas can sitting among the props nearby: 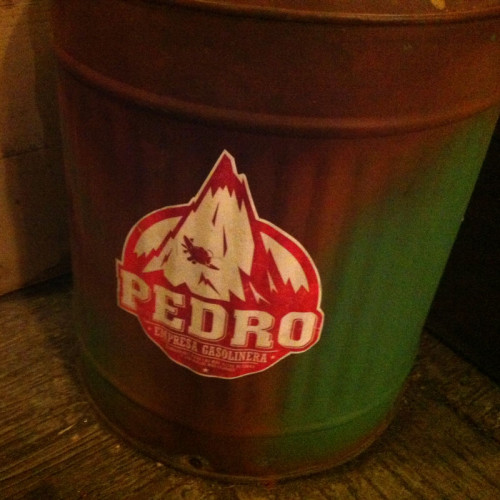 A name, a mountain, and a tiny silhouette is all a Disney geek needs.

How sweet is that? On a night when every gift shop is pelting me with the latest toys from the latest movie, some unknown Imagineer remembered to include an homage to the original talking airplane, and left it around for us to find. I’m a sucker for old, obscure Disney stuff, and I’m glad I’m not the only one. Maybe we’ll get that Planes Land after all.