Disney California Adventure is sort of like an alcoholic that has managed to stay sober for over a year now. We’re all very proud. Doesn’t mean we trust it to drive the kids home from the New Year’s party, but we’re glad it has turned its life around.

A lot of this progress is due to a clever approach in show development, and this approach is called: Don’t be a mall. If you’re going to steal, steal from the best, and DCA is stealing everything it can from its sister park next door: nighttime spectaculars, Fantasyland dark rides,  exclusive membership clubs, themed main streets. Don’t be surprised if Disney soon announces the opening of Walt’s private apartment, where he used to stay when dreaming up his ideal ferris wheels and rotating swing rides.

Also, there’s this new statue being planned for DCA’s Buena Vista Street. I’m sure you’ve heard of it. Disney has put forth several official statements about this statue, how it is supposed to represent Walt as he just stepped off the train from Kansas City, ready to embark on his own California Adventure. It’s a bookend to the story that concludes with the Partners statue in Disneyland, which shows Walt as king of the Magic Kingdom. This is fresh-faced Walt, before the smoker’s cough, before Mickey, before even Oswald. All he has are his dreams. And his luggage.

Unlike the Partners statue, there is no pedestal for this version of Walt. The official explanation goes something like “Here he is just a commoner like us, he hasn’t been elevated above us.” It’s a little insulting and reeks of vague cost-saving measures. But I’ll forgive it.

I do tend to go a bit ballistic over all the luggage. What’s he doing with an engraved trunk? Is this canon? I thought the lore was Walt had only a beat up old suitcase when he stepped off the train from Kansas City. Sort of like what Mickey has. What’s Mickey even doing in the statue? He wasn’t created yet. Oh, but he was in Walt’s head and heart, he just wasn’t a star yet. The old Roger Rabbit explanation for anachronisms. Fine, I’ll buy it. Mickey wasn’t a star, he lived in Kansas City, and one day he happened to hook up with commoner Walt Disney as they both stepped off the train on their way to seek their fortunes.

And then I saw this picture. 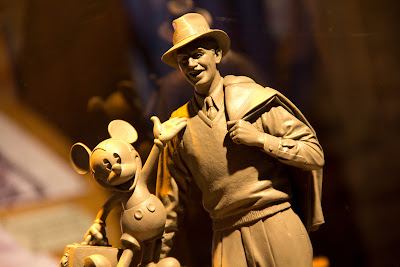 Do you spot anything here? I’ll give you a hint. Look at the fingers. That’s a wedding ring, if I’m not mistaken. The only problem is that Walt didn’t get married until a couple years after he moved to L.A. Did Lilly know about his first wife? Because Mickey sure did.

Look, I don’t expect Imagineers to be experts on every single tidbit of Walt’s life, but I would expect them to have the basic timeline straight.

Anyway, I suppose I’m being too harsh. These pictures are all from the Blue Sky Cellar, and were probably conceptual anyway. Other versions of the statue do not seem to have the wedding ring. So maybe it’s a detail that was caught and fixed. But it certainly felt good to rant for a bit. Especially following a holiday that is all about being thankful.

Special thanks to Andy Castro, who runs the absolutely phenomenal Dateline Disneyland blog over at miceage. The pics are all his.