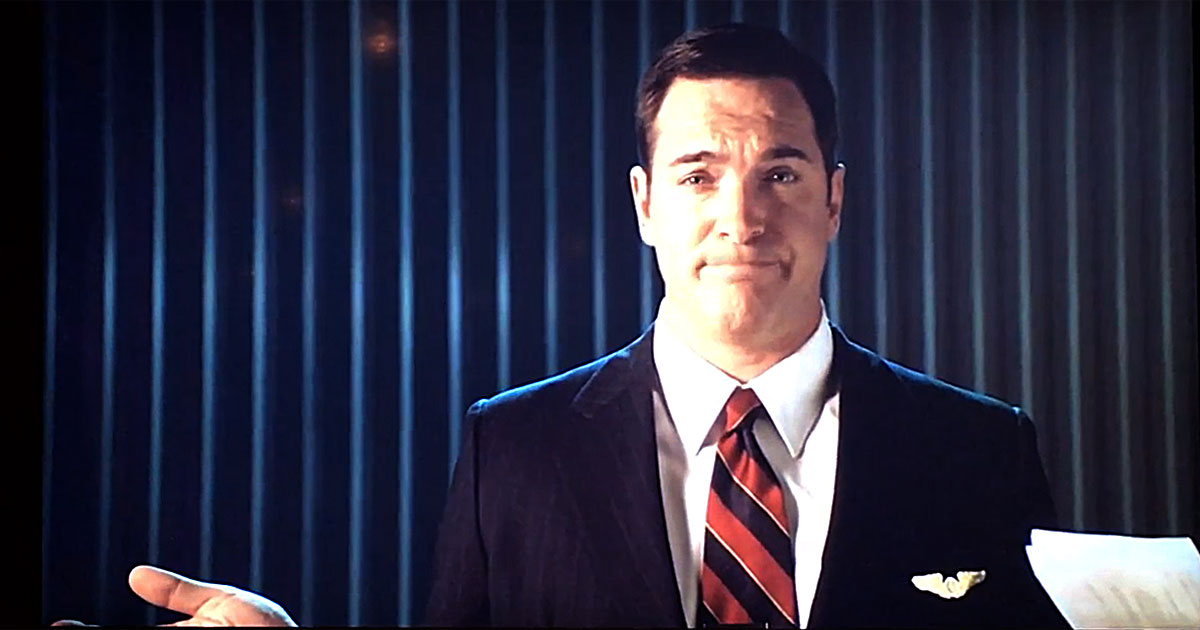 The Soarin’ preshow has been at the center of controversy ever since the ride’s Epcot debut in 2006.

The original Soarin’ preshow video starring Patrick Warburton (who first found fame as Puddy on Seinfeld) was digitally altered to remove references to the ride’s original title of Soarin’ Over California.

However, when the ride changed to Soarin’ Around the World in 2016, another segment of preshow footage was inexplicably altered in the most strange and useless way possible.

And they didn’t think we’d notice.

The segment in question occurs when flight attendant Patrick asks smaller aviators to use the center strap when fastening their seatbelts. A cheeky little brat helpfully demonstrates the maneuver, his brazen smile masking a quarrelsome and rebellious personality.

Did you see it? This kid is wearing a Disneyland shirt! Here we are — all the way across the country in Epcot — and the smarmy rugrat is busting out his Disneyland digs. It’s an affront to Walt Disney World fans everywhere.

What’s more, he’s putting his own irritable stamp on it, celebrating Grumpy as the best Dwarf when everyone knows Doc is king.

Okay, maybe it’s because the ride was first designed for the Disneyland Resort. Or maybe this punk is pushing an agenda.

When Disney acquired Lucasfilm, it apparently inherited that company’s passion for digitally tinkering to make things worse. Disney has already caused one uproar with a digital alteration of an offensive moment during the Rock ‘n’ Roller Coaster Starring Aerosmith preshow.

Now with Soarin’ Around the World, the Soarin’ preshow has finally received the digital sterilization it so desperately needed.

Yes, it’s the same petulant little child (who is probably related to somebody in Aerosmith). But that Disneyland branding is sayonara.

Just for good measure, they stamped it out of the Disney California Adventure version of the ride as well. No more cross-promotion of a 60-year-old has-been. Now it’s the same Soarin’ preshow on both coasts. (Soarin’ Over the Horizon at Shanghai Disneyland uses a completely different preshow).

Disney unfairly gets slammed on social media for chopping theming and shade out of the Toy Story Land budget. But they deserve credit for spending time and money to obliterate the branding of one of their own theme parks and characters.

Now if we could only get them to remove these awful mouse ears.