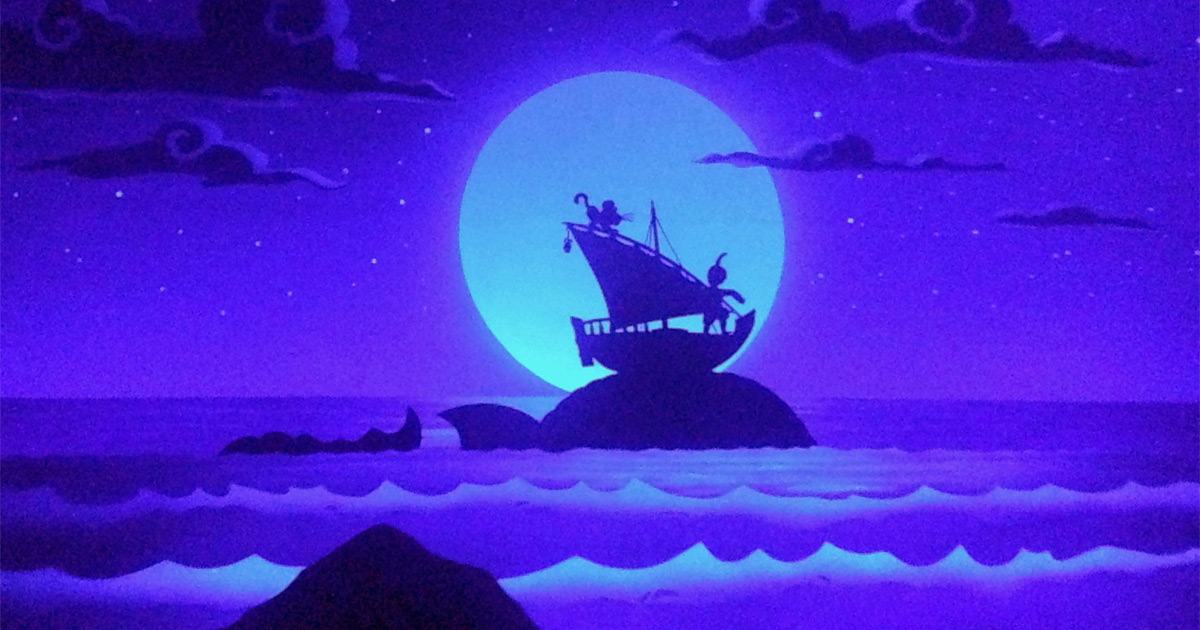 The purple whales of King Triton’s Carousel of the Sea departed the shores of Paradise Pier yesterday, never to return. We waved a tearful goodbye to those cuddly, humpy beasts as they slapped their happy flukes in the waves and bellowed an off-key song.

Then they were gone.

And with them goes a great Parkeology tradition: rapturous obsession with something profoundly stupid.

Have you ever hated something so intensely that you betrayed your uncle’s mystical teachings, dressed up in weird armor, restarted a galactic war, and blamed your parents for it?

Well that was us when Paradise Pier was first announced.

Never before had Disney amassed such a generic collection of rides. Walt once swore he would never have a Ferris Wheel in his park. Yet there one was — a giant hubcap looming over Disneyland’s former parking lot. Maybe terrible puns are your thing. Here’s a hearty helping of “Maliboomer.” You want a theme for your amusement park? How about “amusement park.” Such was the creative nihilism that Paradise Pier exuded from every tacky corner of its pathetic existence.

Things were so bad at Disney California Adventure, they tried a do-over after only 7 years. But while the rest of the park was getting brand new mountain ranges and authentic placemaking, Paradise Pier remained a black hole of badness. The best they could do was slap on a few Disney characters to make its awfulness more palatable. Spoonful of sugar and all that.

They barely even bothered with King Triton’s Carousel of the Sea. It’s entirely possible that they forgot it existed. It lived in a shadowy corner somewhere in the bowels of California Screamin’. Despite being the only Paradise Pier ride ostensibly linked to a Disney character, it was just a generic turntable of fanciful ocean creatures.

Unlike King Arthur’s Carrousel, which a featured 360-degree vista of Fantasyland, King Triton’s riders spent half the ride zooming by concrete walls — one of which propped up the world’s saddest calliope organ like an old armoire left out on the curb for trash day.

But there was something hopelessly endearing about the sea creatures themselves. While scouting an early version of the DLR55 Challenge several years ago (which recently came to fruition) Team Parkeology fell in love with the amethyst cetacea.

Purple whales, to the layman.

But whatever the reason, the purple whales became a beacon of hope in the despair of Paradise Pier. The Screamin’ queue might suck away bits of your soul. The Fun Wheel would always make you question life’s significance. But the purple whales were always there to pick you up. To wrap you up in their big floppy fins and give you a little nuzzle and let you spin around on their backs for a few minutes before pointing you in the direction of Cars Land.

We began to champion the purple whales. And fought over them every chance we could get.

The Rise of the Purple Whales

As our obsession for the purple whales grew, we began to filter all our experiences through the lens of those majestic, purply creatures.

A few years ago Team Parkeology voyaged the land of the Rising Sun, to partake in all the exotic flavor of Tokyo DisneySea. They have another carousel over there, known as the Caravan Carousel. That one follows the theme of the Arabian Coast, and in true Disney fashion, it sports a ridable character in the form of Aladdin’s genie.

I am happy to say that we caused no small amount of Japanese consternation and alarm by physically wrestling for the right to ride the purple genie.

When it came time to experience the Arabian Coast’s other major attraction — the superb Sinbad’s Storybook Voyage — we were beside ourselves with joy that one show scene features literally the largest animatronic purple whale we have ever seen. We pledged allegiance to that purple whale and all that he stood for, even if we couldn’t understand a word he was singing.

Not to be outdone, the Mermaid’s Lagoon area of Tokyo DisneySea features its very own gift shop, the Sleepy Whale. I need not tell you that it is our favorite whale-themed gift shop in the entire world for the very simple reason that it was swallowed by a purple whale.

Purple whales have become the standard by which all ride vehicles are henceforth judged. Your script may suck, your theming may be crap. But stick us on a purple whale and we are good.

Sadly, yesterday was the final day for Paradise Pier’s purple whales. As the area is set to begin its second transformation into Pixar Pier (which frankly sounds like more of the same), King Triton’s Carousel of the Sea has closed for good. The purple whales are no more.

We will miss them, but it helps to know there are other purple whales out there for us to enjoy.

And who knows? Maybe somehow they will come back. The purple whale is a friend of mankind. Pixar does have a couple movies that take place under the sea. One of their characters even speaks whale. Only the Disney Imagineers know the answer.

But until that time, please join us in singing the song of the purple whale.

We’ll tell you the tale
Of the big purple whale
How funny and mighty is he!

He’s big and he’s purple
And he goes in a circle
And that’s really how it should be.