If you’re wondering why the blog has been so quiet this year, here’s the answer. I’ve just finished writing a new book called Arabian Heist. It’s funny, adventurous, and magical—exactly the types of things Parkeology has focused on for five years now.

The book is not about theme parks, but if you like this blog, then we probably like the same kinds of stories. I’m excited to finally share it with you and I hope you’ll check it out. 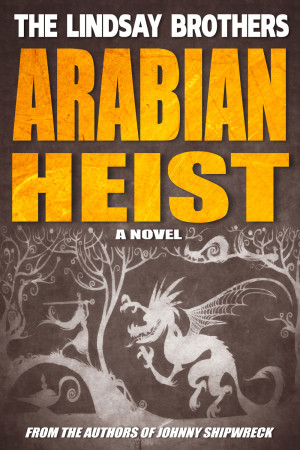 Some knights pledge their whole lives to sacred duty. Sir Champaign can’t even fake his way through the first crusade.

Exiled by his fellow Crusaders and left to rot at the bottom of a desert pit, he has the rest of his wretched Arabian nights to repent of the heist he didn’t commit—as well as the heists he did. He has but one desperate plan to reverse his fortune. All he needs now is a crew.

Ali Baba had forty thieves. Champaign needs only nine. A ragtag band of experts from all corners of the Arabian underworld—sword swallowers and snake charmers, magic carpet surfers and magic lamp vendors, necromancers and belly dancers. He’d even put a genie on the team, if they’d let him. But nobody’s that crazy.

Then again, their target is the one treasure Ali Baba himself wouldn’t dare touch. It’s guarded by a nightmare more terrifying than any dreamt in one thousand and one Arabian nights: an immortal sand beast known as the Decalogue Dragon. It lives on the desert’s rooftop, in a nest made for dragon wings, in a lair scarred by dragon claws and laced with poisonous dragon blood. But there’s more than just a dragon hoard in that desert cave. And with the help of a fellow knight errant and the funding of a rogue Arabian prince, Champaign thinks he just might have the blueprint to stealing it.

Now every vulture in Arabia is circling, from mute assassins to greedy Knights Templar. He’ll have to be more clever than Aladdin, more cunning than Ali Baba, and more daring than Sinbad to pull off the heist of the century. Maybe give Scheherazade something to write about for the next one thousand and one Arabian Nights.

Only the dragon stands in his way. And it will take more than three wishes to steal the treasure, escape with his life, and clear his name.

Arabian Heist is available in the following formats:

You can view the first few chapters for free at the respective links above, and the whole book can be purchased for less than the cost of a turkey leg at the Magic Kingdom. Hours of entertainment, without all the greasy residue! 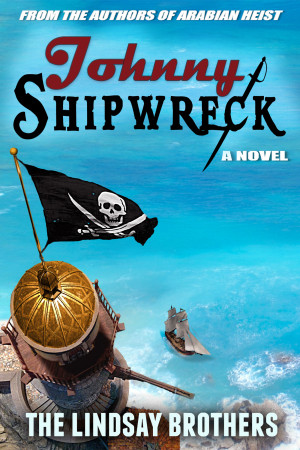 Seriously, I hope you’ll give it a try. And if you’re feeling extra generous, my first book, Johnny Shipwreck, is still available at an even lower price (approximately the same number of pennies you chuck into the water at “it’s a small world”).

Thanks for all the support you’ve given over the years!