I’ve been away for awhile. Disneyland and Christmas ate up all my time. It is a tough life being me.

But as the new year approacheth and my grammar regresseth into King James dialects, I find myself misty eyed with reflection and possibly a cat hair that has fallen onto my contact lens.

It’s hard to believe it’s been 18 years (no, not since my last post — I’m a slacker, but give me some credit). A full 18 years has passed since my last real “family” trip to Walt Disney World (you know, with my parents and siblings and our travel hamsters). Christmas week, 1994. Eighteen years is a long time. All the crying newborns in the strollers from that trip are now of voting age, and many of them are also now drinking illegally. I warned you babies. Life turned out to be harder than it looked, didn’t it?

The crowds were hellish, and Younger Me didn’t know that Mr. Toad, Skyway, 20,000 Leagues, World of Motion, Horizons, and Imagination would all bite the dust in the next few years. It was a brave new world then. Four major new attractions premiered that very week, and I loved them all. Three of them are now gone.

Honey I Shrunk the Audience blew me away, especially the mice gag and the spitting gag (remember, that was the first time they had used it). Timekeeper was hilarious and I thought the AA figures added immeasurable enjoyment to the CircleVision experience. And  the ExtraTERRORestrial Alien Encounter had George Lucas’s name on it, ensuring that I would fork over my hard-earned cash multiple times just for the chance to experience it. On a side note, were we not supposed to be forking over cash to the shabby man out front? He said it was a cleaning fee. 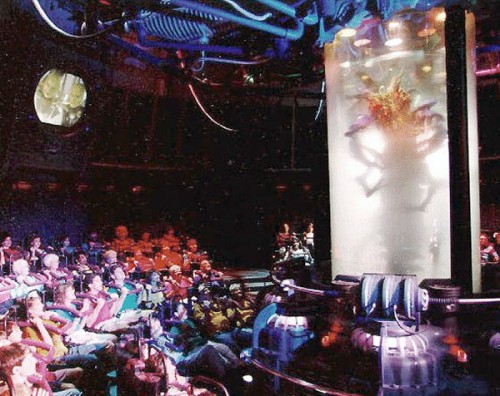 Not once was the theater ever this bright.

Hard to believe that none of those attractions are left. Of my four new attractions, only Twilight Zone Tower of Terror remains, and I guess it is sort of okay, but not nearly as impressive as HISTA or Timekeeper (“terror” was apparently 1994’s word du jour, which I know is nonsensical, but I can’t be bothered to look up the French word for “year”). I lamenteth much at their loss.

Alien Encounter in particular, for a couple reasons. For one thing, it was completely different from anything Disney had done before. A sensory assault designed to scare the living daylights out of you. If they could have figured out a way to create the sensation of a chest-bursting xenomorph, they would have done it. Heartburn from the chili dogs, maybe? (that’s a little Stitch’s Great Escape humor for you — which is known far and wide for its hilarious one-liners).

But more importantly, the 1994 Christmas week version of Alien Encounter has passed into  Disney fanboy lore, because it is the one that closed shortly thereafter, because Michael Eisner said it wasn’t scary enough.

I don’t know why he thought that. Maybe Michael Eisner is made of hardened steel, the kind of man who can stare down the throat of a flesh-eating monster and calmly greenlight a direct-to-video sequel to Cinderella without batting an eye. The sort of man who gives Chuck Norris and Jack Bauer nightmares. A fearless, ice-water-in-his-veins executive who can’t be bothered to elevate his heartbeat on his way to kicking alien butt across the galaxy. But for those of us who were still listening to Boys II Men that year, the 1994 version of Alien Encounter was plenty scary.

Heavy breathing on your neck. Copious amounts of blood gushing from severed XS-Tech maintenance worker arteries. That shivery, flicking snake tongue in your hair. There were long stretches of pitch blackness, echoing thuds, alien screeches. And that was just from watching Tyra Banks in the preshow. 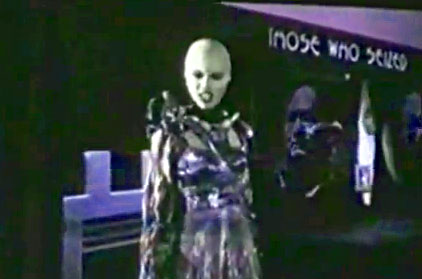 Alien Encounter shut down for several months, and re-opened in the summer of 1995, during my brief stint as a Big Thunder Cast Member. I got to see Cast Previews, and frankly, I preferred the original. Most people’s memories of Alien Encounter include the voice of Tim Curry as S.I.R. The 1994 version had SNL’s Phil Hartman. The basic plot was the same, but a few elements were switched around, and I think more video footage from Maintenance One was used in the later version. And I swear — though I have no photographic proof of this — the alien itself looked different.

I could be completely dreaming this, but it has bothered me for a long time. I have very strong memories of the alien looking more like the devil dogs from Ghostbusters, rather than the insectoid beast that haunted the attraction for almost its entire history. Is there anyone out there who can confirm a different alien? Someone, perhaps, with a gritty, illegal flash photo? 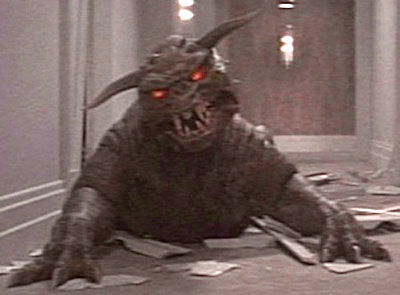 Honey, I blew up the dog.

Anyway, as we barrel headlong towards 2013, it makes me wonder where some of 2012’s new attractions will be, when the current crop of newborns start experimenting with recreational drugs and being drafted into our new corp of Space Marines. Will we be complaining about the outdated Tron look of Test Track 2.0? Wishing they’d hurry up and do something with Belle’s empty cottage? Signing online petitions as Little Mermaid is bulldozed for the Duffy the Bear ride? Celebrating the 1 millionth performance of the Legend of Jack Sparrow?

As the Horizons family used to say, it’s always fun looking back on tomorrow. Happy early  New Year from Parkeology!