Well actually I really am not a crook, outside of trying to shoplift a fruit roll up when I was about 12 (and being caught doing so) crime has never been my thing.  But I’m not talking about myself; I’m talking about one of the most infamous presidential quotes ever. 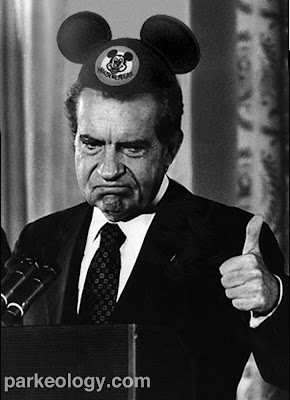 It was near the end of 1973, November 17th to be exact and Richard Nixon was deeply embroiled in the Watergate scandal.  The accusations against Nixon were mounting when he took the podium to address 400 managing editors from the Associated Press.  Defiantly President Nixon proclaimed, “People have got to know whether or not their President is a crook. Well, I’m not a crook.” A few months later he would become the first and only president to resign from office. 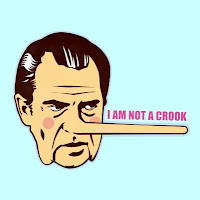 Not everyone believed Nixon’s declaration
This line has been repeated many times since then, parodied in movies and TV shows and in many ways became a lasting legacy of the Nixon Administration.  However what has been nearly forgotten is that this defining moment was not delivered at the White House or some other typical political venue but rather oddly from Walt Disney World! 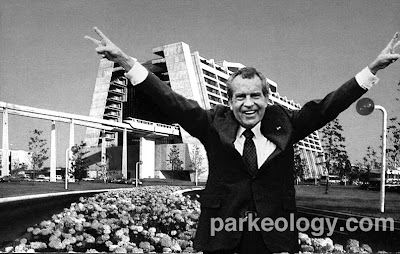 Nixon in fact delivered the “I’m not a crook” speech from a meeting room within the then still new Contemporary hotel on the shores of Disney’s Bay Lake. 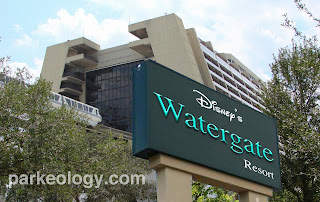 In fact Richard Nixon more so then any president before or since has had strong connections to the Disney parks.  First of all he was the sitting president when Walt Disney World opened in 1971.  The Hall of Presidents was one of the original attractions that premiered along with the resort and people were quite anxious to queue up and see the robotic Nixon “live” and in person (machine). Given Nixon’s less that flamboyant style of public speaking I am not sure that audiences could even decipher whether he was the actual president or not, perhaps if the imagineers could of made the audio-animatronic sweat it would have sealed the deal. 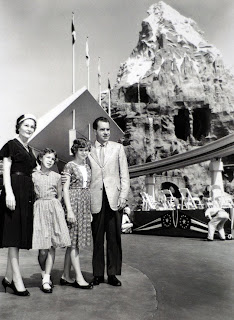 But President Nixon’s connection to Disney goes back much farther than that, back in fact to the days of Walt and the opening of Disneyland.  Nixon was a friend of Walt Disney and throughout his life, especially when his children were still young, Nixon paid many visits to the Disney parks.
Nixon was from southern California, quite close to where Disneyland was eventually built.  He was proud of the fact that Walt chose to build Disneyland close to his own hometown. 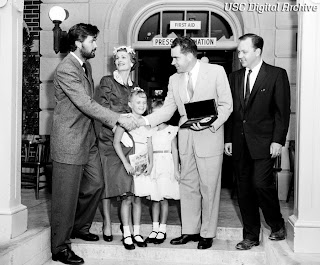 Nixon first brought his family to visit Disneyland shortly after it opened during the summer of 1955, at the time he was serving under Eisenhower as Vice President of the United States. During that visit Fess parker of Davy Crockett fame presented Nixon with a key to Disneyland.  Rather than leaving the park after the ceremony and using it as a simple photo op Nixon stayed all day riding the rides with his extended family, he seemed to truly enjoy the place. 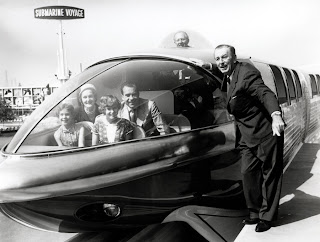 Fun Fact: The Monorail Mark I was powered by disembodied heads of famed television reporters.
Perhaps Nixon’s best-known trip to Disneyland came in 1959 during his second term as Vice President when Disney invited Nixon to cut the ribbon on the brand new Disneyland-Alweg monorail.  Walt asked Nixon to join him in the pilots cabin when the doors shut and the monorail streaked away from the station leaving concerned secret service agents back at the loading platform.  Walt in essence kidnapped Nixon, who knows… maybe the real Nixon was switched with an advanced robotic copy that day, a mechanical slave to do Disney’s bidding in Washington… or maybe not. 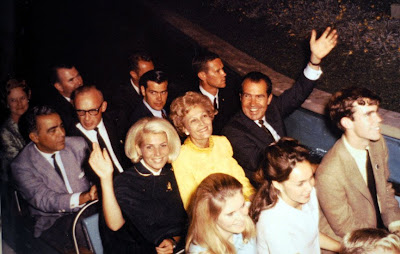 President Nixon himself shared something in common with our very own chief parkeologist and founder Shane… both have publicly acknowledged It’s a Small World as their personal favorite attractions. 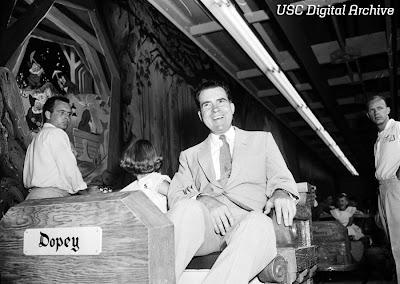 Um, yea… Mr. Vice President, you may want to wait for the next ride vehicle.
After Walt’s death now President Nixon presented Walt’s’ wife Lillian Disney with a Congressional Gold Medal honoring her late husband.  During the presentation speech Nixon had many extremely kind words for Walt saying; “It is very hard to describe our feelings about Walt Disney. I say our feelings, because my wife and I had the opportunity of knowing him personally. He was just as exciting and interesting personally as he was in all of those wonderful movies.” and  “I once asked Walt Disney how I should describe him when we went out and dedicated the monorail at Disneyland. He said that he was an ‘imagineer,’ which means he was an engineer with imagination. But he was more than that. He was a great artist. He was a perfectionist. He was a wonderful human being.” 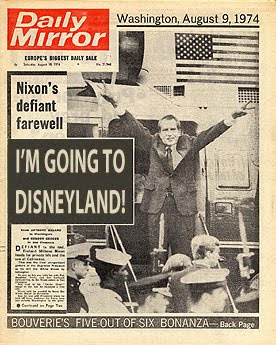 Nixon continued to visit Disneyland as often as he could even holding a fundraiser at the Disneyland Hotel.  Oddly enough the Disney connection does not even stop with Nixon himself, his White House Press Secretary Ron Ziegler worked on the Jungle Cruise when he was a student (something the two of us have in common, no I never worked for Nixon but I was a Jungle Cruise skipper).
Legend has it that even today Nixon’s presence can be felt around the Disney properties, so the next time a cool breeze blows on in listen carefully, you may just hear “I am not a Croooooooooooooook…” faintly echoed in the background as the wind howls by. 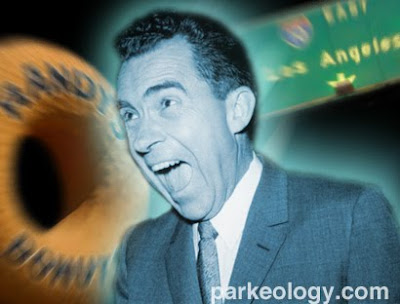