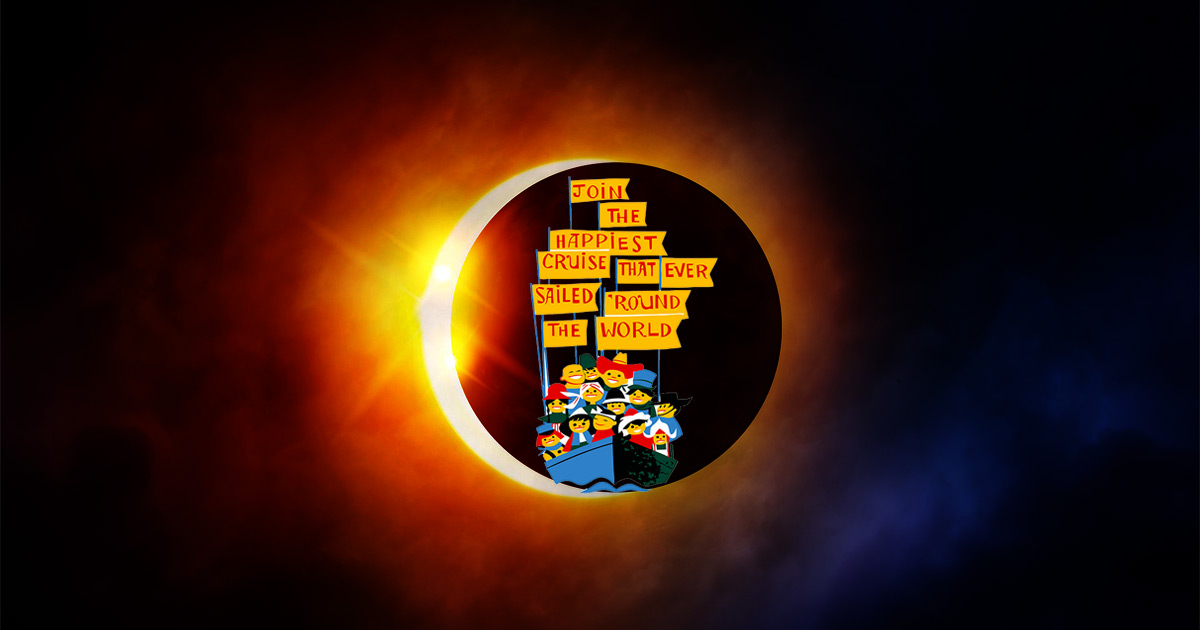 A cosmic event like yesterday’s solar eclipse comes along once in a lifetime. People held parties. Entrepreneurs sold merchandise. Some folks developed superpowers.

And while everyone was outside struggling with funny glasses, Parkeology had a brilliant idea.

Everyone was watching the same old sun. But we’re Parkeology, darnit. We’re different.

Scientists have known about the solar eclipse for decades. So right around lunchtime on the big day, we decided that we probably better start preparing for this thing. I sent my son out to see what sort of safety eyewear he could conjure up.

This is what he came back with.

We asked the Cast Members if these were safe for looking directly into the closest star in our galaxy. They gave us a wide berth and asked us to please tug on the yellow strap again.

Technically, they did not tell us no.

We were still in the first show scene of It’s a Small World when the eclipse began. We could see the moon as it began to inch its way closer to the sun. Before long, it was half-covering the ninja throwing-star sun of Scandinavia.

The quacking geese suddenly let out a nervous twitter and bolted for the shadow of the Eiffel Tower. Don Quixote fumbled with some makeshift cereal box viewing device. The yodelers on the fanciful Swiss Aps plywood backdrops began to chime their cowbells one by one in a minor key — the death knell in their culture.

By the time we reached the India scene, the veil of the moon had risen up to the sun’s eyebrows. The odd shadows cast by the solar eclipse turned the Thailand shadow puppet into an eight-legged octopus of terror. The rippling cellophane Taj Mahal reflecting pool became a glistening sea of coal.

In Egypt, a lone camel stood with its eyes firmly shut against the terrible scene unfolding in the heavens above it while the bowing children of Japan stopped moving completely, their faces pressed into the ground to avoid the harsh, blinding corona.

The Path of Totality

Halfway through the ride, the eclipse reached totality in the land of mariachi cactus.

The temperature in the building dropped several degrees in a matter of seconds. The blinking hippo froze and toppled over with a titanic splash. Before long, the patchwork-quilt kangaroos and novelty wooden bird robots were plunged into darkness.

The sky turned pitch black as we sailed into the Polynesian section.

Here hula dolls in grass skirts thrust their hips in time to a mesmerizing chant as all the children of the world contemplated their impending annihilation. The water in the trough turned red as blood. Ceiling tiles and magic carpets fell from the sky.

Insanity reigned. I saw a dancing penguin in a bowler hat stab an ice skater, while a doll in authentic Russian garb pulled petals one by one from a helpless plywood tulip. Toy soldiers abandoned their post, firing indiscriminately into the crowd. A strand of chain-link monkeys ran by screeching, a helpless green-furred koala bear in their grasp.

And yes, the two-headed goat creature came to life and conversed like a human being, holding court over the proceedings like a mad king.

As the eclipse reached its zenith, I heard the Polynesian sun speak — in a voice as dreadful as thunder from tissue-paper volcanos, in a whisper as ungraspable as sailfish on a never-ending wheel of fortune.

It spoke only one word.

I’d like to report what we saw as the moon made its way out of the path of the sun and the ride returned to normal. But alas, the Star Tours 3-D glasses were not correctly rated for viewing a solar eclipse.

We have been stricken completely blind.

This would not be such a bad thing. I’m not sure either of us could look at It’s A Small World the same way again. But the image of that moon against the suns of Walt Disney’s classic attraction has been burned forever into our retinas.

And I fear… I fear what I see. When I close my eyes, there is only one thing staring back at me in the endless void.

That moon. Oh, that moon. God help us all.